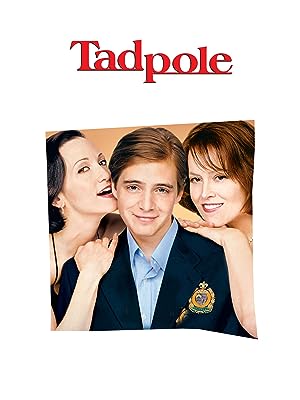 (56)
1 h 18 min2002PG-13
Oscar Grubman is no ordinary 15-year-old. He's suave, smart, cultured and has one thing on his mind: older women! But when a sexy 40-something friend of the family actually takes Oscar up on his infatuation, he suddenly finds himself in way over his head!

maltixxReviewed in the United States on October 31, 2011
4.0 out of 5 stars
Good little movie
Verified purchase
I enjoyed this little movie, which the director refers to as a "novella." It's the story of a 15-year-old ably acted by Aaron Stanford, but you wouldn't know it from the credits featuring Sigourney Weaver, John Ritter, and Bebe Neuwirth. Hey, the kid is in every scene; it's his movie. John Ritter doesn't appear much or do much (although he does it competently). But Aaron Stanford is the star and deserves more credit than Ritter.
One person found this helpful

CatReviewed in the United States on January 22, 2015
5.0 out of 5 stars
Bebe Fascinates
Verified purchase
Bebe Neuwirth has the most fantastic, creamy, white skin.
She is so gorgeous in this film, she practically glows!
Aaron Stanford is cute, & Sigourney is lovely as well,
although it might have been more believable if he'd has his
big crush on Bebe! She is one of those women who probably
never tanned, & it's preserved her exceptionally well. The plot is
an amusing character study.

keithkimzey66Reviewed in the United States on January 25, 2013
5.0 out of 5 stars
great indie
Verified purchase
I highly recommend this movie. John Ritter and Sigourney Weaver were excellent.great comedy film.it's a shame you can't find it on Netflix.

Ciara BerryReviewed in the United States on October 18, 2013
5.0 out of 5 stars
Happy
Verified purchase
I got this movie almost a week after I thought I would get it, at least I got it days before the last day expected. This movie was witty and much more funny than I thought it would be. This is a great indie comedy!

Andrew EllingtonReviewed in the United States on February 2, 2011
4.0 out of 5 stars
Fast swimmer...
There is something about `Tadpole' that is so nerdy charming I can't help but recall it with affectionate memories. It is far from perfect, and yet the little imperfections that plague it only seem to make it better for me. It's not the type of wildly engaging comedy that can be watched over and over again but it is the type of smartly comedic film that you will remember for a long while, even after a solitary viewing.

Watching the film on a total whim, I was surprised by how witty and devilishly sophisticated it wound up being.

The film tells the story of Oscar, a young man with quite the conundrum. He is, unfortunately, in love with his step-mother Eve. The fact that Eve is married to Oscar's father really doesn't deter him much from attempting to make his feelings known. He takes the Thanksgiving break (and subsequent visit home from school) to find a way to expose his feelings only to have romantic entanglements get in the way. Before he knows it he is being followed (quite accidentally) by a fellow schoolmate with a crush, pushed on a neighbor with which he shares no interest and thrust into sexual debauchery with Eve's best friend, Diane. All of these `road-blocks' make it more and more difficult for Oscar to just tell Eve how he feels.

But then again, does it really matter?

The cast is flawless, especially Bebe Neuwirth who just sizzles in every scene with comedic delights and snarky charm that just floods the screen. She is a star and the star of this film whenever the light is cast her way. Sigourney Weaver is a tad frumpy here, but I think that was the point (casting a more mature light on Oscar's infatuation) and the late John Ritter is certainly up to the task and making his character shine. Aaron Stanford understands the muted arrogance needed to create Oscar and keep the audience interested in him. He rides the cuff of unlikable and engaging, which helps carry the film.

Sadly, the strengths of the script and cast seem to fall through the directors hands. The film needed some crisper, more attentive direction that could have really embellished the already strong material. Instead, the muted brushstrokes of Gary Winick (the man behind '13 Going on 30' and `Bride Wars') can create a dullish tone to the film. Hey, this is Winick's best film to date, but it may be his least imaginative directorial effort.

Still, this is a must see; a film I highly recommend!

BD AshleyReviewed in the United States on July 19, 2004
3.0 out of 5 stars
A surprisingly good romantic comedy
This enjoyable comedy (shot on digital video) with a refreshingly brief running time (approx 75 minutes) won Writer/Director Gary Winick the Best Director award at the Sundance Festival.
Aaron Stanford plays Oscar Grubman (nicknamed Tadpole), a 15 year old who has no interest in girls his own age. By his own admission he feels like a 40 year old trapped in a teen's body. Tadpole's preference for older women reaches the point of chaos when he develop a crush on his stunning stepmother Eve (Sigourney Weaver).
But his attentions are also focused on the equalling sexy Diane (Bebe Neuwirth) whom he meets during an under-aged drinking session in a local bar. An affair soon starts between them and Oscar must try and keep the romance secret from his Dad (the late John Ritter) while wrestling with his feelings for Eve.
Basically TADPOLE is a romantic comedy that merges the classic romantic triangle with a dash of the classic Oedipus syndrome. The resulting movie is an enjoyable time-killer that manages to be both light in tone but with more complexity below the surface than you would expect. While it sounds like some sex comedy you've seen a million times before TADPOLE manages to consistently surprise the viewer without insulting their intelligence (obviously this is an independent movie).
This is one of those rare movies that will appeal to just about any audience. Guys are especially advised to rent this if their girlfriends want them to watch something with them. The brief running time you may be able to talk her into watching an action movie after this has finished! While not hugely memorable, the movie has heart, sincerity and intelligence (Uh-oh! Here comes my feminine side!) as well as all round good performances. The DVD I watched had no special features, but the movie is still worth a look. If you're a romantic comedy buff you'll easily give this movie a higher rating than the three stars I've given it. Which leads us to THE BIG QUESTION: Why is Oscar nicknamed "Tadpole"? Do the math: One 15 year old boy with raging hormones plus two sexy older women. Put that together and close your eyes. What do you see? I see the opening credits to LOOK WHO'S TALKING....
Perhaps I'd be wise to stop my review here. Maybe this IS meant to be a movie to watch with the missus! If that's the case insert this into your DVD player, pop some popcorn, pop some Viagra and Bob's your uncle. Viola! There's your night planned!
2 people found this helpful
Amazon customerReviewed in the United States on April 18, 2003
4.0 out of 5 stars
Very funny; absolutely loved it.
Summary:
Oscar Grubman (Aaron Stanford) is a 15-year old high school sophomore who is deeply interested in literature and has lately been reading Voltaire. Perhaps in conjunction with or more likely as a result, Oscar has developed a very deep romantic and sexual interest for older women and one woman in particular, his stepmother, Eve Grubman (Sigourney Weaver). When Oscar comes homes for Thanksgiving with his father and stepmother, Oscar has committed himself to break the news to Eve. Before he gets a chance, he gets drunk and, imagining Eve's best friend, Diane Lodder (Bebe Neuwirth), to be Eve because she is wearing Eve's scarf, Oscar has sex with her. Perhaps it wouldn't be a problem except, remember, Oscar is 15 and Diane is over 40 and Eve's best friend. Now Oscar has to convince his dad, Stanley Grubman (John Ritter), that he is a normal 15 year-old and also explain to Eve why he slept with her best friend when he actually wanted to be sleeping with her.
My Comments:
I don't know that my summary did the movie justice. I think I may have made it out to be more malicious than humorous and if that's the case, then you'll just have to see this movie to understand how what might be a seen as disturbing situation is actually a very funny comedy.
The story is superb and the acting is pretty good overall. Bebe Neuwirth and Aaron Stanford are very convincing and Sigourney Weaver is only slightly less so. The only problems with this movie, and I hate to make this criticism because I really do advocate a change from film to digital, are the picture quality and the cinematography. I'm guessing the movie was filmed using lower quality digital cameras. The cameras have a hard time focusing at times and a lot of quick motion turns into blurred motion. I believe digital is the way of the future, but perhaps the technology for anyone to make a major motion picture using their Circuit City bought digital camera isn't quite there yet.
Despite the picture problems, the movie is loads of fun and lots of laughs. I should also point out that young men sleeping with much older women, in case you haven't already realized this, is going to be very disturbing to some people. Well, if you find it very, very disturbing, you may want to skip this one. If you think you can look past that to be entertained by a very enjoyable movie, then you should definitely see this film.
One person found this helpful
See all reviews
Back to top
Get to Know Us
Make Money with Us
Amazon Payment Products
Let Us Help You
EnglishChoose a language for shopping. United StatesChoose a country/region for shopping.
© 1996-2022, Amazon.com, Inc. or its affiliates