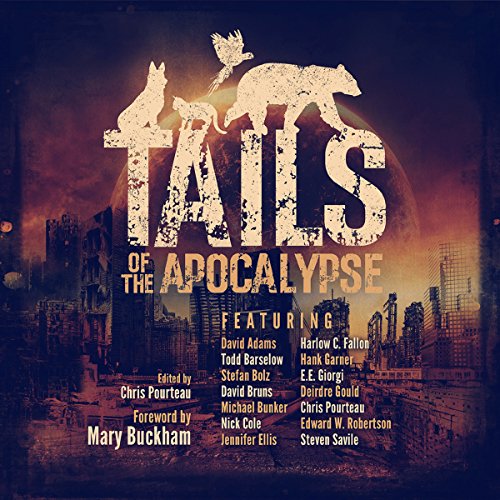 Tails of the Apocalypse

The Doomsday siren calls on civilization's last day. Natural disaster. Nuclear war. Pandemics. These are the ways the world ends.

Now, in the aftermath of ruined cities and humanity gone savage, mankind will once again find his oldest allies and closest friends amidst the debris of all that once was. The Walking Dead meets The Incredible Journey in 14 incredible tales of nobility, self-sacrifice, and unconditional love as told by today's most talented independent authors. Humans will learn an old lesson anew - that animals, the heroes in these tales, might just make the difference in their quest to survive one more day.

Special invitation from Audible!
Learn more about Membership
List Price: $24.95
You Save: $3.00 (12%)
By completing your purchase, you agree to Audible’s Conditions Of Use
Sold and delivered by Audible, an Amazon company
Share

4.7 out of 5 stars
4.7 out of 5
88 global ratings
How are ratings calculated?
To calculate the overall star rating and percentage breakdown by star, we don’t use a simple average. Instead, our system considers things like how recent a review is and if the reviewer bought the item on Amazon. It also analyzes reviews to verify trustworthiness.
Top reviews

ahhmericanwoman
4.0 out of 5 stars Tales of "Tails" adds a wonderful new slant to dystopian worlds!
Reviewed in the United States on November 20, 2015
Verified Purchase
I received a free ARC of this book in exchange for an honest review. But I also purchased a copy because I believe strongly in the charity this book is supporting.

I love dystopian fiction, and I love animals, so when I heard about this book, I made a giant WOOP WOOP sound or something like it. There is a nice variety of animal types represented in this book, although a lot of the stories deal specifically with dogs, or a dog. Some of the animals are pets, but many are not.
Usually when I review an anthology, I like to mention the various titles included, and just a little bit about each. But since there are 14 stories here, what I strongly recommend is that you take a minute or two and click the “LOOK INSIDE” arrow for this book. You will see the names of all the stories, their authors, and if you go just a bit further, you will find a brief synopsis of each story. It will answer many of your questions about whether or not you think this book is something you will enjoy. Here are my opinions:
By the time I finished the first story, I was already in love with this book. By the second, I loved it even more. And it continued that way. More toward the center of the book, there were a series of stories that seemed to be written almost as a “prequel” to something else their authors had already written. I found I didn't enjoy those stories as much. It seemed there was so much devoted to setting up the fantasy world from their series, that the emphasis on the individual animal was a little lost into the background. I grew a little discouraged. (Note: that is not true of all of them that are associated with a series. Some of them were excellent!) Then after that interlude of stories about which I had mixed feelings, more fantastic stories came up. Some of the stories had really moving endings, and I will remember them for awhile. There were a few I liked so much that I have looked into other writings by the authors of those particular stories.
If I had to pick a favorite, it would probably be “The Poetry of Santiago”. It's a beautiful story, and it's the only one about a cat. I'm a cat person so that probably played into my choice. But there were many stories I could put in the list of contenders for my favorite!
Another thing I liked about this book is that the world situation in each story was so very different. They were all dystopian, but the circumstances varied widely. This is a great book to discover many different authors in this genre and the types of stories they write. Everyone has their own different tastes, and there will be some you love, some you like, and a few maybe not so much. But there is enough great writing in this book to make it extremely worthwhile. The fact that a portion of its proceeds go to such a worthy cause make it a “must” addition to your library if you love dystopian themes. Thanks so much to all these wonderful authors for these stories and the work that went into pulling this book together!
Read more
4 people found this helpful
Helpful
Report abuse

Dot2Trot
5.0 out of 5 stars Frefreshing and wondeful
Reviewed in the United States on November 20, 2015
Verified Purchase
Such a refreshing collection of stories. So different to have animals as the focus. Also unusual was the continuous quality of the stories. I'm a big fan of short fiction, and I buy a lot of anthologies, but this one was unique in that there simply aren't any dull ones. The other good thing is that the stories are very different from each other. We have dystopian apocalypses and zombie apocalypses and even a biblical-inspired apocalypse. The best thing about each is that the animals are there, as main characters or side characters, ironically humanizing the stories with their faithful presence. What a worthy addition to the post-apocalypse genre.
Read more
7 people found this helpful
Helpful
Report abuse

Thalia
5.0 out of 5 stars The Most Unique Set of "Tails/Tales" I've Ever Read...
Reviewed in the United States on August 23, 2016
Verified Purchase
I must admit up front that when a friend recommended this book, I was distracted and totally missed the fact that "Tails..." was not actually "Tales..." as I originally thought. So imagine my surprise when I dived into the book and discovered that each of these 14 completely unique stories revolves around an animal. Whether beloved furry companion, feathered friend or spirit animal, each story reveals a different view of humanity after the apocalypse and our relationship to the other creatures that share the planet with us. I can't remember when I have so enjoyed a collection of fiction as much as this one. And I am constantly amazed at the imagination of the writers and how many different ways one can imagine "The End".

Each story is astounding in its own way but my personal favorites include "The Water Finder's Shadow" by David Bruns, "The Bear's Child" By Harlow C. Fallon, "Unconditional" by Chris Pourteau and, since I am an incurable cat person, "The Poetry of Santiago" by Jennifer Ellis. This one was particularly poignant to me, not only for its superb telling of an elderly feline desperately trying to save his equally aged human friend from the impending volcanic disaster, but also because I happened to be reading it while on a Mediterranean cruise, sailing past Etna, Stromboli and Vesuvius at the time.

This is a gem of a collection, heart-rending at times but also full of hope. If the Apocalypse does find us, it will be the treasured animal companions that survive with us that will hopefully make life bearable and perhaps even worth living in the aftermath.
Read more
13 people found this helpful
Helpful
Report abuse

Kindle Customer
5.0 out of 5 stars A Soul Stirring Read
Reviewed in the United States on June 16, 2018
Verified Purchase
This is a book to treasure and reread, a book that needs to be savored rather than devoured. The stories do not always have happy endings, but there is always closure. It celebrates the mystical connection between humankind and animalkind. I look forward to returning to these stories in future years. I think you have to be more than an animal lover to truly appreciate the depth of these takes. Elaine
Read more
Helpful
Report abuse
See all reviews
Back to top
Get to Know Us
Make Money with Us
Amazon Payment Products
Let Us Help You
EnglishChoose a language for shopping. United StatesChoose a country/region for shopping.
© 1996-2022, Amazon.com, Inc. or its affiliates