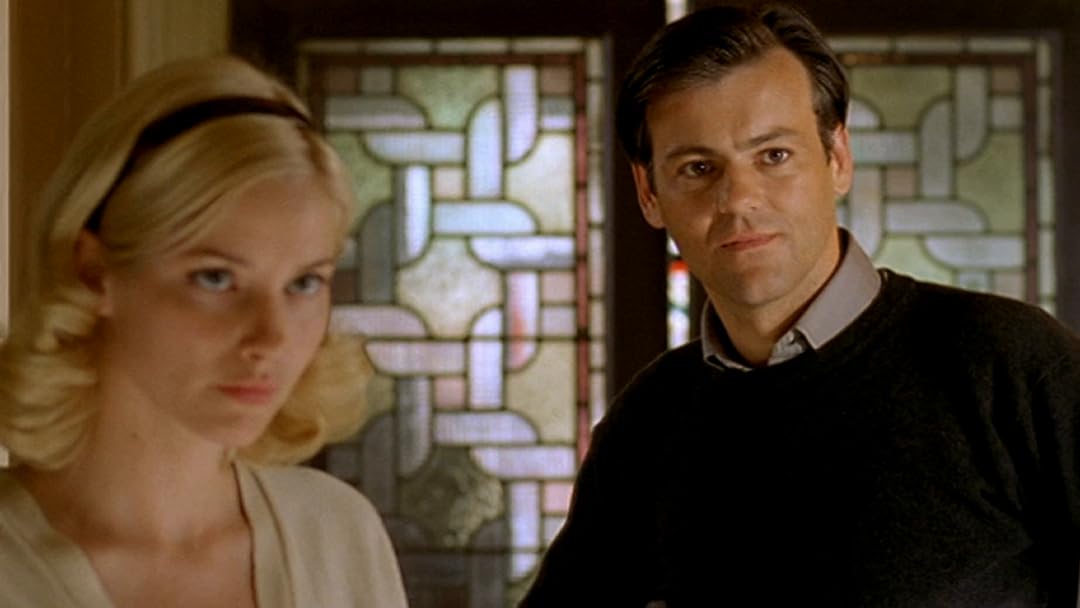 (24)
6.82 h 1 min2000X-Ray18+
When gorgeous Jenny Bunn meets the predatory womanizer Patrick Standish, a battle of lust versus wits begins. His tactics to maneuver her into the bedroom only harden her resolve to keep him at arm's length. Adapted from Kingsley Amis's classic novel by award-winning screenwriter Andrew Davies, this story recalls a provincial England as well as the jazz and strip clubs of late 1950s Soho.

seaheatherReviewed in the United States on November 18, 2021
3.0 out of 5 stars
Good Acting Bad Script
Verified purchase
Film begins with romantic focus that quickly stalls into repetitive theme -- boy meeting girl, boy attempting seduction, girl resisting: repeat. Peripheral characters to the central duo also have obsessive sexual needs that seem overly explicit for the situation. After awhile, gratuitous sex scenes create a sense of ennui. The film makers rely muchly on the idea that disrobing their actors is a reliable ploy to keep the audience interested not realizing that additional elements -- including an actual plot -- do help things move along. That - and some kind of character development beyond a naive girl becoming attached to a thoroughly unrepentant cad. Rupert Graves is good in his role but the role itself is a downer.
Not much fun.
3 people found this helpful

from the terraceReviewed in the United States on September 27, 2021
3.0 out of 5 stars
All Dressed Up With No Where to Go?
Verified purchase
This is what I call an atmospheric movie. That is, a British period piece that's interesting with so many directions to go but, really, goes no where and ends up as a "yawn." I gave it 3 stars because it was well done in terms of acting and production but just no real story line. Nothing else to say.
4 people found this helpful

FreeforAllReviewed in the United States on November 15, 2021
3.0 out of 5 stars
Distasteful but good acting and perhaps a point
Verified purchase
At first I gave this one star. This was my original review: "I kept watching this film, thinking some feminist point would eventually come out but it did not. It was sickening and distasteful. Here is a hint: do not behave like Patrick. What a disappointment." Upon further reflection, I did find the acting and costuming to be really good, and the movie interesting over all. Perhaps the point was to demonstrate attitudes of a time period that many of us are glad are not always as prominent today. Even still, the review is based off of the individual's opinion, and the way Jenny is treated and how she is used as a commodity and disrespected as a person is so icky that it leaves an unpleasantness that lingers for me.

tallndnReviewed in the United States on November 19, 2021
5.0 out of 5 stars
STARTLINGLY WELL DONE "FILM COLEUR"
Verified purchase
It director Nick Hurran has successfully mastered the challenge "Film Noir" as a genre suggested, but never really accomplished.
And he has done it with such beautiful grace and style, the entire film comes across, smoothly, elegantly and with depth of style.
If we don't name a new genre after Mr. Hurran, we shall keep the French "flavor" of "Film Noir" with the term "Film Coleur".
And all this from one (me) who holds Film Noir as mildly offensive for its lack or craft and continuity.

Nicholas A. DeutschReviewed in the United States on March 11, 2011
5.0 out of 5 stars
Lively & Faithful Version of Amis Novel: Why Isn't it on DVD?
Verified purchase
British author Kingsley Amis's sharply observed and bitingly funny 1960 novel of heterosexual relations at a time of rapid cultural change, still very much worth reading, has been filmed twice. A 1970 screen adaptation (now out on DVD) unwisely moved the action well into the "swinging 60s" and made many changes to plot and characters, none for the better. The result feels dated and unconvincing, and often curiously smarmy and sexist. The lovely Hayley Mills as Jenny Bunn, the "girl" of the title, Sheila Hancock as Martha and Penelope Keith, in a cameo as a poll worker, provide moments of genuine enjoyment. Oliver Reed, however, seems miscast as "ladies' man" Patrick Standish, and comes across mostly as glum and uncertain.
Fortunately, in 2000 the BBC made this excellent 3-part TV film set firmly in the right period, with an expert screenplay by Andrew Davies and lively, assured direction by Nick Hurran. There's a really fine cast headed by Sienna Guillory as Jenny and Rupert Graves (in top "romantic bad boy" form) as Patrick, Hugh Bonneville, Emma Chambers and Robert Daws; Leslie Phillips makes a brief, memorable appearance. While some of the more lacerating aspects of Amis have been toned down - Sheila is physically more attractive than in the book, Graham finds a girlfriend, and (most notably) Patrick's ultimate conquest of Jenny, which in the novel is essentially "date rape," becomes more ambiguously consensual - overall this version is faithful to Amis and the period, and highly enjoyable on its own terms. Issued only on VHS in the U.K. (and never in any form in North America) it's overdue for release on DVD.
11 people found this helpful

suzbReviewed in the United States on November 17, 2021
4.0 out of 5 stars
Delightful Movie
Verified purchase
This was a well-done period piece that's well-produced, acted, directed, and written. Can't go wrong. I was engrossed. There are twists and the movie used every minute of the two hours with excellent storytelling.

GeorgeReviewed in the United States on November 1, 2021
2.0 out of 5 stars
Pass. Didn't finish
Verified purchase
Unlikable characters and pretentious movie making with no substance.
One person found this helpful

D. KovacsReviewed in the United States on October 14, 2021
5.0 out of 5 stars
Perfect version of this Kingsley Amis novel
Verified purchase
Perfectly cast, perfect settings — Amis isn’t even my cup of tea as an author, but I love this production! Rupert Graves and Sienna Guillory are especially delicious as the leads.
See all reviews
Back to top
Get to Know Us
Make Money with Us
Amazon Payment Products
Let Us Help You
EnglishChoose a language for shopping. United StatesChoose a country/region for shopping.
© 1996-2022, Amazon.com, Inc. or its affiliates