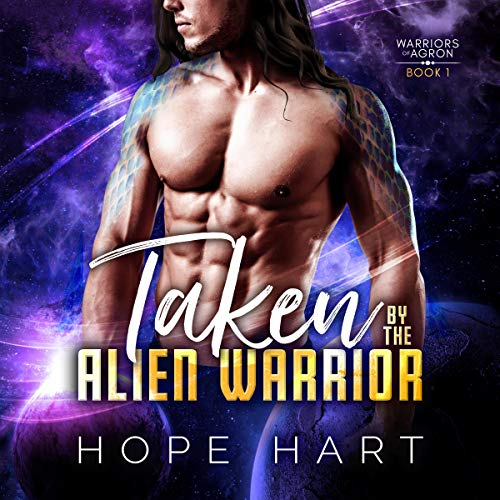 Taken by the Alien Warrior: Warriors of Agron, Book 1

The aliens who abducted me made a mistake.

The Grivath have sold us on Gule - a planet known for dealing in human flesh. The women who are being held captive with me are in high demand and they all look like models. Me? I’m 5'2 shy, curvy, and a kindergarten teacher. Maybe they really meant to take my pageant queen sister?

If that's not bad enough, our ship has crashed and half of the women are missing. Did I mention the locals want to eat us? Insert the tall, sexy warrior aliens, who saved us. Things are looking up, except that one of them is eyeing me like a snack, and not in a cannibalistic way - if you catch my drift.

Terex is rough, fierce, and bossy, and doesn't seem to understand that I can't stay and be his snuggle bunny. I'm not quite sure why he isn't chasing after one of the other women when every man I've ever known has overlooked me.

But not Terex. When he looks at me, he doesn’t seem to see chubby, awkward Ellie. And his gaze burns brighter instead of shifting away.

Now, I've just got to convince him to help me find the other women and get back to Earth.

Should be a piece of cake...Right?

Taken by the Alien Warrior is a full-length romance with no cliffhanger and a guaranteed HEA. While this is a spin-off series from the hugely popular Arcav Alien Invasion series, this is a standalone series.

Listen to it now.

djsofToledo
5.0 out of 5 stars We all have issues.
Reviewed in the United States 🇺🇸 on January 15, 2023
Verified Purchase
She is on an alien planet, and still has body issues. Her big alien will have to be careful. Really liked the characters.
Read more
Helpful
Report abuse

Tee
5.0 out of 5 stars Loved it!
Reviewed in the United States 🇺🇸 on November 13, 2022
Verified Purchase
I loved this book. It's only book 1 but I know by just how much action is in it that the rest will be just have to be good. This will leave you running to get the next book just to find out what's going on.

Even if you don't like abduction books, this one is a good read. From the contents on self esteem issues (main female character), to the sex scenes to the humorous dialogue that goes right over the aliens heads. I loved so I'm off to the next book.
Read more
Helpful
Report abuse

Kindle Customer
4.0 out of 5 stars Taken by the Alien Warrior #1
Reviewed in the United States 🇺🇸 on August 13, 2022
Verified Purchase
Oh my this was a good book. First time I've read this author and I have thoroughly enjoyed this book. It's so hard for these Aliens to understand that the humans they fall for are independent stubborn and strong women. They may not seem to be at first but in the end they'll be just as strong as their mares. This author has done a great job of getting these Aliens to understand it.
Read more
Helpful
Report abuse

Skipper
4.0 out of 5 stars Terex and Ellie
Reviewed in the United States 🇺🇸 on March 2, 2021
Verified Purchase
I liked the story plot, Ellie is abducted along with other women and crash lands on a planet. They survive the crash and think they are being rescued by another alien tribe, but soon learn that they would have been eaten. They are rescued by alien warriors that happen to be attractive- so that is a plus. Terex is smitten with Ellie who is traumatized by her family that has caused her low self esteem and self worth. Terex is a gentleman throughout her struggles. Her self worth issues gets a little tiresome even after he tells her how beautiful she is. They have a very steamy romance.
***Spoilers***
So I struggle with how Ellie could possibly consider going back to Earth when her family treated her like garbage and Terex treats her like a Queen, that did not make sense to me. The other thing I had an issue with is Learza... she lied to Ellie about Terex being her mate to try and destroy their relationship. After Ellie confronts Terex about it he was disappointed that Learza lied to her. Later when Ellie and Terex have a disagreement, he is seen laughing with Learza in their home. Not cool! I dont understand how Learza was not held accountable for her actions, and that it was portrayed as Ellie's problem that she was upset about it like she was crazy. This is the one area Terex disappointed me. He should have confronted Learza with Ellie by his side to end her schemes. Also why would you want to keep a friend like that if she was trying to destroy his happiness and the love of his life? Doesnt sound like a friend to me.

I enjoyed the story, it has a HEA I gave it 4 stars overall.
Read more
13 people found this helpful
Helpful
Report abuse

Kimberly Ann Twotrees
5.0 out of 5 stars awesome
Reviewed in the United States 🇺🇸 on October 12, 2022
Verified Purchase
I got scared for them. I laughed I cried. I couldn’t put the book down. I sure you’ll enjoy this book. I’m excited to read more. Give it t a try. You’ll enjoy the big sexy Warrior.
Read more
Helpful
Report abuse

Chizer Baby Girl
4.0 out of 5 stars First Time - Hope Hart
Reviewed in the United States 🇺🇸 on March 30, 2022
Verified Purchase
Taken by the Alien Warrior is Book 1 of the Warriors of Agron series. It’s also the first book by Hope Hart that I’ve read. Am looking forward to enjoying the next book in the series. The story dynamics and romance was entertaining and enjoyable. It’s always a treat to discover a new author to follow. The combination of a bit of action along with humor and romance was the perfect mix.

As always a thank you for the brave and talented authors to share their talent and creativity with us.
Read more
One person found this helpful
Helpful
Report abuse

Kindle Customer
5.0 out of 5 stars Exciting Reading
Reviewed in the United States 🇺🇸 on August 10, 2022
Verified Purchase
Hope Hart edited a great in with this exciting Warriors of Agron series kick-off. The characters are fascinating and memorable, with four main Braxian warriors, and a group of fiesty , independent earth women who have been stolen from their world and aren't inclined to meekly accept their fate. I'm looking forward to the next book in the series.
Read more
Helpful
Report abuse

Joy
5.0 out of 5 stars Very similar to Ice Planet Barbarians but AMAZING all the same!
Reviewed in the United States 🇺🇸 on June 29, 2021
Verified Purchase
Ok what matters most is I LOVED this book and finished in less than 6 hours 😅 stayed up through the night and part of the next day to finish it. Slightly obsessed then I got on TIKTOK 😅 downloaded Ice Planet Barbarians by Ruby Dixon and started it and was slightly rubbed the wrong way when it started off almost identical? I mean obviously not the exact but so similar that I kept double checking which book I was reading?! I strongly urge you to read the first three pages for yourselves to see. What made me decide to write this was I took a look at the publication dates and noticed that IPB was published in 2015 and this just last year? Which is why I was rubbed the wrong way :/ Did this author just take inspo was Ruby? I don’t know as I’m just discovering both of their work. Either way I loved this book and the way it’s written and I’m eager to dive deeper into both the series but felt compelled to point this out for future readers who may not have been aware of their similarities.
Read more
7 people found this helpful
Helpful
Report abuse
See all reviews

Vivacious Val
4.0 out of 5 stars Great Read
Reviewed in the United Kingdom 🇬🇧 on July 16, 2021
Verified Purchase
Interesting start to a new series with a broody protagonist, Terex and the human female, Ellie. Introductions in which Ellie comes into her own through the love of said alien warrior. The US another story as a secondary plot with the king of the tribe Arkiz and Nevada a human female marine who wants to rescue the other females who were stolen as they are in danger. So lots going on in this book but the main thrust of the story focuses on the relationship between Ellie and Terex. I am hoping that future stories will have some women of other ethnic backgrounds just for some diversity !!We shall see!!
Read more
One person found this helpful
Report abuse

A P
4.0 out of 5 stars Good read
Reviewed in the United Kingdom 🇬🇧 on September 23, 2020
Verified Purchase
Loving this series. Great characters and plot. Really like that it's not all about sex and domination, but also has a good story. Yep these are good 'uns. You need to read the previous books before reading this one.
Read more
Report abuse

Sem Nicholls
5.0 out of 5 stars So different but so good
Reviewed in the United Kingdom 🇬🇧 on February 28, 2020
Verified Purchase
This is so different to the usual alien romances but it's so good. Strong story with lots of possibilities for others too...really well written just love it
Read more
One person found this helpful
Report abuse

Kindle Customer
3.0 out of 5 stars I would have enjoyed the book but there were pages missing and I had to work out what was happering
Reviewed in the United Kingdom 🇬🇧 on May 20, 2020
Verified Purchase
I have only three star because there were pages missing in the book. They wasn't down loaded. I would have enjoyed the book more with these missing pages
Read more
Report abuse

Kindle Customer
5.0 out of 5 stars Good read
Reviewed in the United Kingdom 🇬🇧 on March 7, 2020
Verified Purchase
Loved this story, I have read all of the Arcav books and this is looking to be just as good
Read more
Report abuse
See all reviews