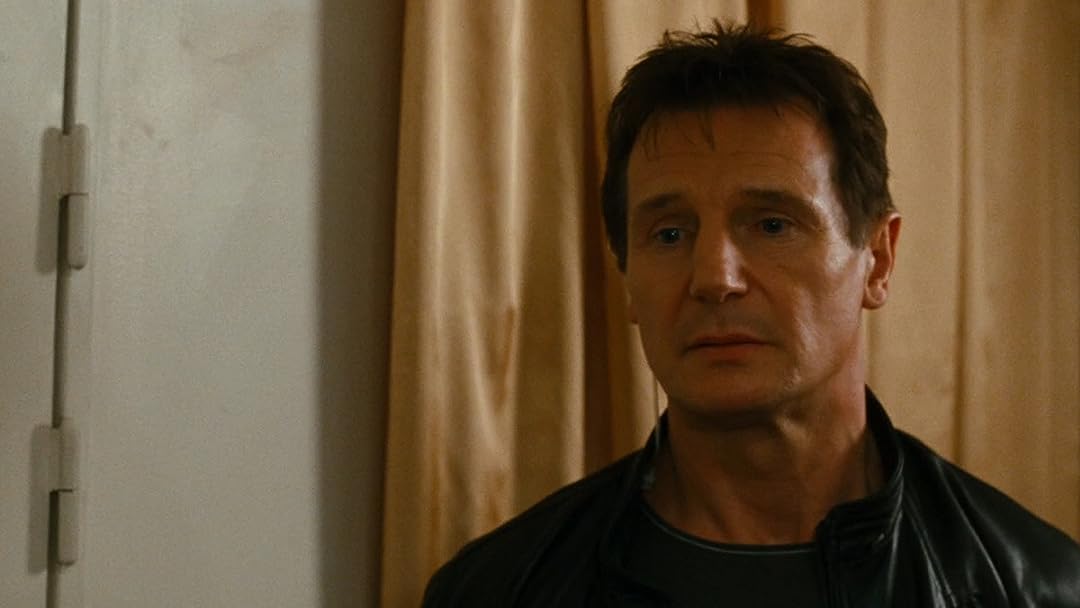 (13,446)
7.81 h 30 min2009X-RayPG-13
When his estranged daughter is kidnapped in Paris, a former spy (Liam Neeson) sets out to find her at any cost. Relying on his special skills, he tracks down the ruthless gang that abducted her and launches a one-man war to bring them to justice and rescue his daughter.

ProfessorReviewed in the United States on July 1, 2020
2.0 out of 5 stars
Ridiculously silly
Verified purchase
Super human Liam Neeson kills 35 people, beats the crap out of dozens more, steals cars, causes car crashes, makes a building blow up, and jumps through lots of windows, all to save his daughter, who has been snatched in Paris by Albanian traffickers. It's a lot of fuss over a spoiled, stupid little brat. But of course, it's the old heart rendering father / daughter routine.
That's about it.
Liam Neeson can actually do more than beat up and kill people and wreck cars. Check out _A Walk Among the Tombstones_, 2014. He does some real acting in that one. But he can't resist these action flick paychecks.

joel wingReviewed in the United States on August 23, 2020
3.0 out of 5 stars
Don't make this dad mad
Verified purchase
Who knew this movie would create an entire franchise? Liam Neeson plays Bryan Mills. He was a former CIA field agent. His daughter Kim (Maggie Grace) goes to Europe and gets kidnapped by a criminal gang. The story is about Mills using his “special set of skills” to get her back.

The story begins by making Mills a sympathetic character. He’s a bit down and out as an ex-agent. His wife divorced him because of his career. He’s trying to create a relationship with his daughter, but it’s difficult. At the same time he’s completely paranoid and sees the world as one big threat, which makes him opposed to his daughter’s trip to France. His fears are realized when Kim is taken.

The rest of the movie shows that Mills is a bad ass father. He gets to talk to one of the kidnappers and gives his famous speech about his skill set and that he’s going to track down the criminals and kill them. That’s what the rest of the film is about in an action packed cat and mouse chase across Paris.

Because this was the first film in the series it was still new and fresh and very good action film.
C

addy thomasReviewed in the United States on March 2, 2018
5.0 out of 5 stars
Five Stars
Verified purchase
nice
11 people found this helpful

JakeReviewed in the United States on December 4, 2021
3.0 out of 5 stars
Classic action
Verified purchase
Classic dumb action movie. I'd give the actual movie 5 stars, but the version that is available on Amazon is unfinished. There's sound design missing in places and some scenes are cut short or altered.

For instance, when the main character is questioning/torturing Marko in most releases of this film, he stabs nails into his legs and wires them to the building's electricity. In this version he electrifies the chair. In normal releases, when he kills Patrice Saint-Clair, he empties his pistol into his body in the elevator. In the Amazon version he shoots him once. There were multiple other similar changes.

It's like they tried to make the film less violent, but didn't actually change the rating (Taken was always PG13). Did some googling and apparently Amazon has done this with other movies, even releasing production versions in a few instances. Basically poor quality control.

Still a good movie, but I'd watch it on another platform.
2 people found this helpful

Sara K.Reviewed in the United States on October 1, 2016
5.0 out of 5 stars
A movie you can watch over and over
Verified purchase
Talk about suspense!!! This is one of my all time favorite movies. Liam Neison's voice is so sexy and listening to him throughout this movie is a pleasure. Movies that keep you on the edge of your seat and the absolute best. This does that through the entire movie. It will make you think twice as a parent letting your child travel overseas. If you have not seen this movie you MUST see it. It will not disappoint. They have a Taken 2 and 3 now. They are not as good as the first one, but still definitely worth the watch.

This movie was very well directed and the acting is GREAT. Not a bunch of fake nonsense. You can actually believe what is happening.
27 people found this helpful

HeatherReviewed in the United States on June 5, 2018
5.0 out of 5 stars
Five Stars
Verified purchase
loved it
10 people found this helpful

debra carderReviewed in the United States on July 10, 2017
5.0 out of 5 stars
Five Stars
Verified purchase
nice
11 people found this helpful

Rudolph KowalczykReviewed in the United States on August 20, 2018
5.0 out of 5 stars
Five Stars
Verified purchase
AAA
12 people found this helpful
See all reviews
Back to top
Get to Know Us
Make Money with Us
Amazon Payment Products
Let Us Help You
EnglishChoose a language for shopping. United StatesChoose a country/region for shopping.
© 1996-2022, Amazon.com, Inc. or its affiliates