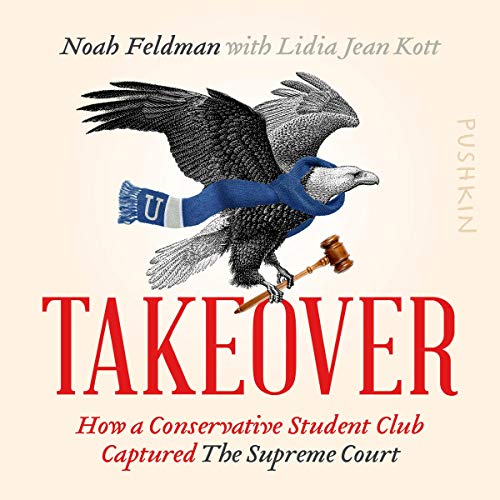 Takeover: How a Conservative Student Club Captured the Supreme Court

Six of the nine sitting justices of the Supreme Court are current or former members of The Federalist Society - a private, conservative legal organization which has grown to dominate modern American jurisprudence.

Takeover tells the story of how The Federalist Society started as a student club and grew to become the most influential legal organization in US history. Over the last three decades, they managed to shape judicial policy and secure numerous seats for its members on courts of appeals and the Supreme Court. Now at the height of its prominence, the organization faces new challenges and internal divisions threaten to splinter the group as its members debate the core founding principles of the Federalist Society. Author and narrator Noah Feldman, a constitutional law professor at Harvard, host of the Deep Background podcast, and author of several books including The Arab Winter and The Three Lives of James Madison, provides special insight and access into this organization. He takes listeners into the offices and chambers of the people who know the Federalist Society best and illuminates how the group came to power, the challenges it faces, and its future which should matter to everyone.

Your audiobook is waiting!
Learn more about Membership
List Price: $10.49
You Save: $3.50 (33%)
By completing your purchase, you agree to Audible’s Conditions Of Use
Sold and delivered by Audible, an Amazon company