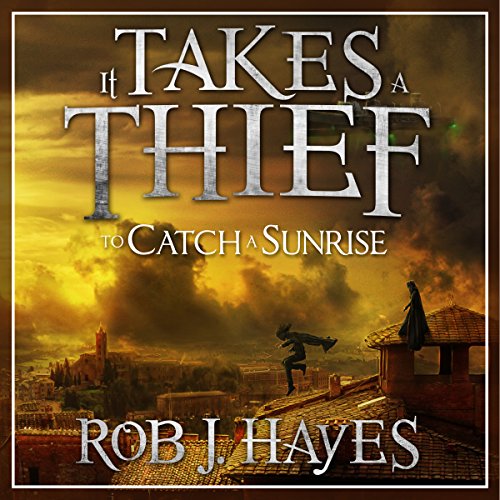 It Takes a Thief to Catch a Sunrise

Set in a new world of corruption, deceit and thievery; mixing magical fantasy and alchemy punk with a healthy smattering of airshippery. It Takes a Thief to Catch a Sunrise follows Jacques Revou and Isabel de Rosier, a couple of charlatans at the top of their game.

After completing the biggest heist of their career, Jacques and Isabel are ready to retire, until the king's shadow councilor freezes their assets and forces them to work for him. Jacques and Isabel find themselves thrust into the social elite, playing the parts of Baron and Baroness Bonvillain, as they attempt to uncover a plot that threatens the entire kingdom.

4.2 out of 5 stars
4.2 out of 5
50 global ratings
How are ratings calculated?
To calculate the overall star rating and percentage breakdown by star, we don’t use a simple average. Instead, our system considers things like how recent a review is and if the reviewer bought the item on Amazon. It also analyzes reviews to verify trustworthiness.
Top reviews

C.T. Top Contributor: Star Trek
5.0 out of 5 stars Gentleman Bastards for the PG-13 set--which isn't a complaint
Reviewed in the United States on April 11, 2017
Verified Purchase
I'm a huge fan of Rob J. Hayes' writing. I am waiting with anticipation for his Ties That Bind books to return to print as I maintain they are some of the best grimdark fantasy which has come out in the past few years and the best produced by Ragnarok Publications. So, when I heard he was working on a second series, I was intrigued and immediately picked up a copy.

The premise of the novel was surprising as it's a steampunk fantasy version of Regency Europe. It avoids the usual Medieval fantasy setting as well as the Hyborian Age mismash so common in fantasy but is also a good century or two before steampunk is usually popularized. England and France-like nations are set against one another with airships on one side as well as spellcasters on the others. The spellcasters, unfortunately, have the advantage and it's kept Sassaile from conquering its neighbor Arkland.

Jacques Revou and Isabel de Rosier are a pair of extraordinarily skilled con men and cart burglars who possess Lupin the Third levels of ability to bullmanure their way out of situations. Jacques is a alchemist of no small skill and capable of creating any number of devices or effects to assist their cons while Isabel is a master of disguise as long as said disguise is someone gorgeous. They're deeply in love and play off each other in a hilarious style, even as they're nearing retirement despite being in the prime of their lives.

The lovers-in-crime hit a brick wall, though, when Sassaile's spymaster proceeds to confiscate their accumulated fortune and dragoons them into the secret service. The protagonists HATE this even as they're forced to become spies in the Arkland court with the knowledge they're probably going to be executed no matter how well they do. What follows is a complicated story about the couple trying to play their masters against the nation they're spying on which wants to execute them while looking for an out. It all ends with an amazing airship story, frustrated love, and a bunch of humorous twists.

The book is not remotely like the Ties That Bind, lacking the gruesome murder of moral ambiguity which made that story so good. Indeed, it may be a little too much on the lighthearted side for me. Despite this, I enjoyed it as an adventure story and the humor kept it a breezy read from start to finish. I would have appreciated some more moral ambiguity and, honestly, I was on Renard's side against the Queen but that didn't reduce my enjoyment factor one bit.

This is a good novel for anyone who wants to enter into the steampunk setting and works well as a non-traditional fantasy novel. It's certainly well-worth the money and I'm surprised to see such range in any author as normally you wouldn't expect someone who did such dark fiction as The Colour of Vengeance to do something as relentlessly cheerful. I think the books are something akin to a brighter Gentleman Bastards and would recommend them to fans of Scott Lynch.

In conclusion, I recommend this book all round and don't have any real complaints about it. I've bought the second book in the series and hope to get to it immediately. It may not be the best book I've ever read but it's simply FUN and that goes a long way.

Our heroes, Jacques Revou and Isabel de Rosier, are a pair of skilled con artists, pick-pockets, and burglars. They're also delightful to listen to. Everything is going well for them until they find themselves against their will in a dangerous long-con by a man they do not trust to let them live when it's all said and done.

The world-building is a lot of fun. Very steampunk, but not overly. The dialogue is fun as is the "narrator voice."

I've read comparisons to The Lies of Locke Lamora, and that's a good comparison, but at the same time, not entirely correct. The world is very different. The characters are very different. But if you enjoyed one of those books, you're extremely likely to enjoy the other.
Read more
Helpful
Report abuse

superstardrifterTop Contributor: Fantasy Books
5.0 out of 5 stars Alchemy and airshippery abound!
Reviewed in the United States on January 16, 2017
Verified Purchase
This story follows Isabel de Rosier and Jacques Revou, lovers and thieves who, at the beginning of the tale are executing their greatest heist of all with plans to retire. They buy a small house and settle down only to be visited by Renard Daron, the Shadow Conceiller to the king, who has not only frozen all of their bank accounts, but has taken possession of everything they own. The only way that they can get everything back to to agree to do one final job for him, while being more or less shadowed by his goons, Franseza Goy and Amaury Roche.

I really liked the setting. When you get steampunk and airships and alchemy, you usually get Victorian England, but here we appear to have gotten something more to the tune of late-19th century France, which was a nice change from others in the genre. I liked Isabel, and I love-love-loved Jacques. I liked their banter, their relationship, and how they each brought a different skill to the table. Isabel with a history in acting, and Jacques with a love of alchemy and airships.

Here’s where I’ll say that I started out listening to this one as an audiobook. Right off the bat I had to turn my speed settings down (I usually listen to audiobooks at about 1.3x) because the narrator spoke too fast compared to pretty much every other audiobook I’ve ever listened to. In the end, I just couldn’t do it. I couldn’t stand the sound of her voice. Her accent for Isabel was over the top and annoying, her Daron was just… not at all what I expected, and let’s not even get me started on Franseza and Amaury. I listen to a *lot* of audiobooks (between 80 and 90 a year, usually), and this isn’t the first narrator that I’ve disliked enough to give up on a book, but I always feel bad doing it. I have a policy where I will give an audiobook 3 hours before I give up on it. I gave this one 3:01:42 before I was just done. Sorry, audiobook.

Luckily, however, this was a whispersync purchase, so I already had the kindle version as well, so I was able to pick it back up and continue where I left off. I think I made a very good decision, because I feel like not liking the narration was hampering my actual feelings for the book. Once I gave up listening and started reading, I was absolutely enthralled. The moral of the story is to not let a bad narration prevent you from finishing a book that you like. I did like this book, quite a lot!

The plot was quite gripping, never boring, full of enough twists to keep me reading well into the night, and well thought out. The idea of the Elementals, and the Oozes and things like that gave this world a bit of a magical touch, which was nice. I really liked the secondary characters, especially Franseza. One of my favorite things about the way that this novel was written, is that the narrative refers to Isabel and Jacques as Adeline and Bastien if they’re ‘in character’ as opposed to ‘out of character’. That was a nice bit of attention to detail. I also liked how the plot was advanced in cleverly used flashbacks from time to time.

I’ll definitely read more in this series. I hear that It Takes a Thief to Start a Fire. I had better investigate!
Read more
Helpful
Report abuse
See all reviews

Bookshelf Builder
5.0 out of 5 stars A fun, stylish heist fantasy
Reviewed in the United Kingdom on December 6, 2017
Verified Purchase
I really enjoyed this book, which takes two easy-to-like genteel thieves/con-artists and entangles them in the perilous political schemes of a country not unlike 19th C France (but with airships & automata). There is humour, tension, action, twists, and above all delightful characters, while the language captures the spirit and style of both the era and the classic adventure tales written about it. Even scenes that at first seem to be side-tracks eventually pay off in the end, and the (few) slower moments just make the ending more meaningful. Recommended for anyone looking for an enjoyable, lighter read (and I don't mean that as a slight) with great characters and steampunk elements.

One note: this is nowhere near as dark or grim as the same author's other books -  The Heresy Within (The Ties that Bind Book 1)  and sequels. In fact, if it weren't for a recognisable flare for witty banter and exciting action, you might think it an entirely different writer. This could be a good, bad, or just unexpected thing depending on what you are looking for - either way, it's a very good book!
Read more
One person found this helpful
Report abuse

dighall
5.0 out of 5 stars Previously sold as “The Northern Sunrise”
Reviewed in the United Kingdom on February 27, 2019
Verified Purchase
This is a great story but bits of it seemed familiar. After a bit of searching I found that I’d bought this book from Amazon under a different name 5 years ago.
Read more
Report abuse

Book Worm
4.0 out of 5 stars Good rogue tale
Reviewed in the United Kingdom on April 26, 2015
Verified Purchase
Good rogue tale. Not perhaps as charismatic as Locke lamora, nor as captivating as tales of the kin, but still, very good, and has plenty of potential. Looking forward to a sequel...
Read more
One person found this helpful
Report abuse

Martin Sear
4.0 out of 5 stars Enjoyable
Reviewed in the United Kingdom on August 5, 2016
Verified Purchase
Not as good as any book in the ties that bind trilogy but in my opinion those three books were tremendous, still an enjoyable read
Read more
One person found this helpful
Report abuse
See all reviews
Back to top
Get to Know Us
Make Money with Us
Amazon Payment Products
Let Us Help You
EnglishChoose a language for shopping. United StatesChoose a country/region for shopping.
© 1996-2021, Amazon.com, Inc. or its affiliates