You've subscribed to An Alex Benedict Novel! We will preorder your items within 24 hours of when they become available. When new books are released, we'll charge your default payment method for the lowest price available during the pre-order period.
Update your device or payment method, cancel individual pre-orders or your subscription at
Your Memberships & Subscriptions
There was an error. We were unable to process your subscription due to an error. Please refresh and try again. 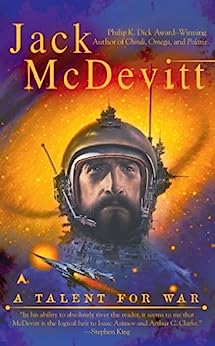 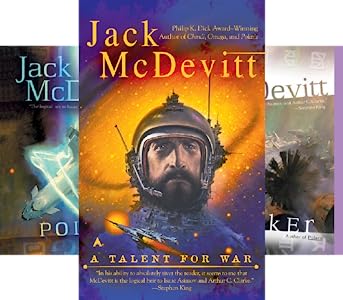 Jack McDevitt is a former naval officer, taxi driver, customs officer and motivational trainer. He is a multiple Nebula Award finalist who lives in Georgia with his wife Maureen.

4.2 out of 5 stars
4.2 out of 5
257 global ratings
How are ratings calculated?
To calculate the overall star rating and percentage breakdown by star, we don’t use a simple average. Instead, our system considers things like how recent a review is and if the reviewer bought the item on Amazon. It also analyzes reviews to verify trustworthiness.
Top reviews

Alex Benedict's life is immersed in history. He is an antiquities dealer and his late uncle was an archaeologist. When his uncle dies, he is left with his uncle's last remaining mission.

The problem is that he doesn't know what the mission is.

This seems to be 9,000 years in the future, when humanity has expanded into a fair portion of the galaxy and run up against the Ashiyyar, an alien species that communicates telepathically. 200 years before the book, the Ashiyyar was systematically conquering the divided human worlds. A resistance emerged to oppose the aliens and unite the frontier worlds led by the heroic Christoper Simms, who beat the Ashiyyar time and time again, even though he was outnumbered and outgunned. Simms died in an epic way that united humanity against the Ashiyyar.

The mystery seems to involve this history.

The story was an easy read. Ironically, it seemed almost more of a history retrospective than an action adventure book, with long stretches devoted to uncovering bits and pieces of the past. Action-adventure was well-represented throughout the book, particularly at the end where Benedict and his pilot, Chase Kolpath, who is not much of a major character in this book, have to make some tough decisions.

I was going to give this book four stars as a journeyman effort, with a bit of dragging out of the story, but the final chapters managed to convince me that this was a book I would recommend to people looking for a nice bit of space opera.

Tom Enyeart
4.0 out of 5 stars A great story with a great ending.
Reviewed in the United States on June 22, 2015
Verified Purchase
Jack McDevitt's A Talent For War is a very well-crafted and well thought out book. I liked this book very much, and I plan to read more of McDevitt's work as a result. A Talent For War was first published in 1989, so I am a bit of a late-comer to the party, so to speak. I have been reading SF on and off for the last five decades, but for some reason I never got around to any of McDevitt's books until now. I would not have purchased this book had I not read a positive book review for the most recent Alex Benedict novel. Rather than start at the end of the series, I thought it best to start at the beginning.

I read a number of other readers' reviews before I purchased A Talent For War. I was intrigued that a number of readers thought it the best SF novel ever written, and several readers mentioned re-reading the book multiple times. Other reviewers declared that it was less than a SF novel and more of a mystery story.

Although I liked the book very much, it is far from the best SF novel ever written, in my opinion. I can see how some readers consider it to be more of a mystery story than hard SF. To be sure, there are many great SF classics that involve mysteries or puzzles that are solved by the protagonists, and I don't think that makes them any less of a SF novel. In the case of A Talent For War, an array of mysteries or unexplained events are presented to the protagonist, Alex Benedict, which he, sometimes laboriously, thinks through and figures out. Although intriguing, this laborious effort of working through clues and piles of obscure documents negatively affects the pacing of the book. However, if you are patient to get through those sections, the author rewards the reader with a great ending that artfully reveals the answers to all the mysteries.

McDevitt is a good writer, not a great writer, and he knows how to tell a story. Some reviewers have commented that McDevitt's novels are weak on characterization. I can see that, but I do not consider it a flaw because he is such a good story teller. I will take a good story over good characterization any day. I also appreciate a good ending. A Talent For War is a great story with a great ending.
Read more
13 people found this helpful
Helpful
Report abuse

T. J. Toth
5.0 out of 5 stars A science fiction mystery
Reviewed in the United States on August 16, 2020
Verified Purchase
McDevitt is my favorite sci-fi author. He is a great story teller - pulls you in right from the start with characters that you immediately care about. Alex Benedict finds and sells antiques of great historical interest. Here he inherits the mystery from his uncle, who died on his way to followup leads about one of the great figures of human history out in the galaxy. Alex narrates in this book but later books in the series are narrated by Chase, his assistant. Lots of action, lots of mystery. A surprise ending that is "shocking"! I love all of his books and this is a great one to start with.
Read more
Helpful
Report abuse
See all reviews

decco999
4.0 out of 5 stars A Decent Detective Story
Reviewed in the United Kingdom on September 7, 2015
Verified Purchase
This is the first Jack McDevitt book that I have read. It is the first in a series of eight entitled “Alex Benedict”. I knew nothing of the book or the author when I started reading and, admittedly, it took a while for me to understand what the premise of the book was and where it was heading. Broadly speaking, I would liken the storyline to an Agatha Christie “Miss Marple” novel, albeit that the elderly lady is transposed into a young, self-sufficient man with access to space travel.

This is essentially a mystery surrounding an historic war hero that Alex Benedict has elected to resolve, following some cryptic clues left behind by a recently deceased relative. The pace of the narrative is quite slow but the character development is good and the various alien planetary descriptions well thought out. And, there is nothing too complicated to the conclusion as the mystery is eventually solved. A well-written book that will lead me to read the next in the series.
Read more
2 people found this helpful
Report abuse

Willy Eckerslike
3.0 out of 5 stars Not great but not terrible either.
Reviewed in the United Kingdom on April 7, 2013
Verified Purchase
Future archaeology science fiction is an unfamiliar sub-genre so I don't really have anything for comparison. In this novel, the first of the Alex Benedict series, he follows his dead Uncle's investigation into an event that could ultimately contradict the prime tenet founding the delicate human galactic diaspora following a war with an alien species. As with other American imprints, the book is small, printed on very poor quality paper with the text squashed right into the fold and against the edges. The narrative pace is pretty good, though it does get bogged down a few times, and the somewhat linear, predictable plot is nonetheless well constructed. There's not really a lot else to say. All-in-all, it was an OK though utterly un-memorable read made less enjoyable thanks to the miserly publishing; I'm not sure I'll dip my toe in the Alex Benedict waters again...maybe, maybe not.
Read more
2 people found this helpful
Report abuse

Chris
4.0 out of 5 stars Probably McDevitt's earliest and best
Reviewed in the United Kingdom on September 17, 2007
Verified Purchase
If you're going to read McDevitt's novels, you can either start with this one and then ignore the rest, or read the others and save this for last to see the flair McDevitt used to have.

This is a great page-turner. It's easy to get pulled into the plot, and the frequent use of "archive" material in the chapters adds a real melancholy to the story (which in itself is both clever and somewhat moving; a very unusual combination for a sci-fi novel.). Having read Omega, Polaris, and Engines of God, A Talent For War is the one I enjoyed the most - and it's a great pity the others aren't more like it.

The story is essentially the uncovering of a semi-legendary hero accredited with saving mankind from an implacable alien enemy. The hero himself, however (Christopher Sim), has great depth and humanity, and ultimately, it seems everyone has taken what they wanted from his mythos, rather than the truth - until the events in the story take place. And the truth both is and isn't what people want to hear.
Read more
4 people found this helpful
Report abuse

Mildred Crumb
3.0 out of 5 stars An entertaining and heartfelt opener to an epic space opera
Reviewed in the United Kingdom on April 25, 2020
Verified Purchase
This book has a Journey to the Centre of the Earth feel to it, which I liked. It makes it different to many hard science fiction works.
Read more
Report abuse