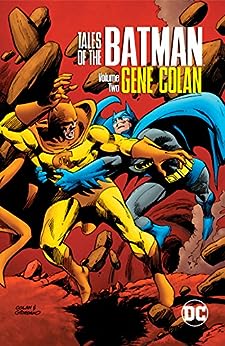 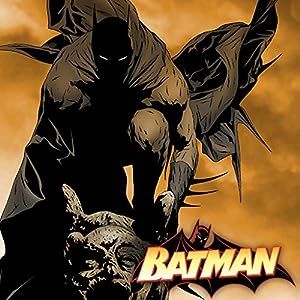 Born in 1926, Gene Colan attended the Art Students League before serving in World War II. His career in comics began in 1944, and he soon became a regular on Westerns, war comics and mystery tales for DC Comics and Marvel. Renowned for his ability to drawn moody, dramatic stories as well as superhero action, Colan illustrated long runs on Marvel's Daredevil, Iron Man, Sub-Mariner, Dr. Strange, Tomb of Dracula and Howard the Duck. Colan returned to DC Comics in the 1980s, where he illustrated the adventures of Wonder Woman and Batman, as well as the series NIGHT FORCE, SILVERBLADE, THE SPECTRE and NATHANIAL DUSK. --This text refers to an out of print or unavailable edition of this title.

4.6 out of 5 stars
4.6 out of 5
48 global ratings
How are ratings calculated?
To calculate the overall star rating and percentage breakdown by star, we don’t use a simple average. Instead, our system considers things like how recent a review is and if the reviewer bought the item on Amazon. It also analyzes reviews to verify trustworthiness.
Top reviews

Brett L.Top Contributor: Batman
5.0 out of 5 stars Another fine addition to the series with a minor drawback.
Reviewed in the United States on March 13, 2018
Verified Purchase
Just got this today and perfect timing for a rainy day to stay inside. This is a fine addition to the series, allowing bat-fans to read (possibly for the first time or at least the first time in years) some of Batman's lesser-known or not normally reprinted adventures from earlier years. Colin's artwork matches the stories, most of them seeming to have a Gothic/Horror/Supernatural bent to them. The only real limitation to this particular volume is that, since its is a volume of stories based by the artist, you get several "part ones" of stories, including one I have been dying to read for years - "The Joker is Wild". Well at least I got part 1 and hopefully part 2 will show up elsewhere. That should not discourage anyone from buying this book, just a warning. Also it was nice to see from an aesthetic point of view that they went back to the original stylization o the dust jacket, just so that it looks more uniform on my shelf.
Read more
15 people found this helpful
Helpful
Report abuse

Kindle Customer
3.0 out of 5 stars Great Art. Frustrating Read.
Reviewed in the United States on October 22, 2019
Verified Purchase
I bought this book for my Kindle because Gene Colan is a fine Batman artist, and l love me some Batman. (Plus I bought and read the first volume). While the art did not disappoint, the overall experience of reading this volume was a bit of a frustrating experience. The reason is that during this time of Batman's publication, the stories ran consecutively across Detective Comics and the self-titled Batman comics (For example Part 1 would run in Batman, Part 2 in Detective, Part 3 in Batman, etc.). But Gene Colan was only drawing Detective Comics at the time. So, almost all of the stories presented in this book are woefully incomplete. Meaning you only get either the beginning, the middle, or the end of a story, and that's it. Never the entire thing. This makes for a very confusing and disjointed reading experience, and the sole reason that I could only give this book 3 stars.
Read more
4 people found this helpful
Helpful
Report abuse

Elvin OrtizTop Contributor: DC Comics
4.0 out of 5 stars Batman, the Soap Opera
Reviewed in the United States on December 8, 2018
Verified Purchase
As usual, these Tale collections of the Batman deliver what is promised. The collected stories are bound in hard cover and appear in glossy pages. Although I miss Neal Adams and Jim Aparo, Colan's artwork is effective in delivering the moodiness that often serves as background to these Batman stories. Being an art-oriented work, it has the handicap of delivering many incomplete stories. The stories during this period often started in a Batman issue and concluded in a Detective Comics issue. Nevertheless, they are still worth reading.

Plot-wise, the stories written by Doug Moench have the style of TV melodrama. While Batman struggles with the usual canonical villains, every story is connected by sub-plots: a tenuous relationship between Jason Todd (the new Robin) and Batman, the return of Vicki Vale, the fragile health of Commissioner Gordon, a corrupt Gotham government, and assassination attempts against an ineffectual Sgt. Buillock. All this happens while Batman struggles against Poison Ivy, the Joker, Two-Face, the Penguin, Crazy Quilt, the Catman, and the Scarecrow.

Wonderful volume on the Batman.

Mark Edward Hendricks
4.0 out of 5 stars WARNING!
Reviewed in the United States on December 16, 2020
Verified Purchase
The Kindle/Comixology edition does not include Detective Comics #544 as incorrectly advertised.
Read more
Helpful
Report abuse

Thomas J. Trout
5.0 out of 5 stars A trip back to the past
Reviewed in the United States on December 11, 2019
Verified Purchase
Great stories
Read more
Helpful
Report abuse

Alex Xoanon
3.0 out of 5 stars Incomplete stories inside
Reviewed in the United Kingdom on March 13, 2018
Verified Purchase
While it is good to have some more Jason Todd stories available, what is annoying about this book is there are a number of two part stories that are incomplete. So we get "laugh Killer Laugh" but not the concluding "joker is wild" story - though the caption to say "concluded in The joker is wild" has been left to let you know you can't find out what happens next. Nice!
Simerlarly you get c-c-cold which is the second half of a story. You don't get the first half.

DC needs a better way of releasing these stories as this is simply frustrating. If vol 2 of The Breyfogle book does not have all of The Penguin Affair (a very important story that I'm surprised has not been collected yet) I probably won't buy it.

Giving this three stars for the complete stories that do appear. Just a shame about the other issues.
Read more
8 people found this helpful
Report abuse

Mr. M. S. Shaw
4.0 out of 5 stars Four Stars
Reviewed in the United Kingdom on May 11, 2018
Verified Purchase
Not as good as Volume I, for completists..
Read more
Report abuse