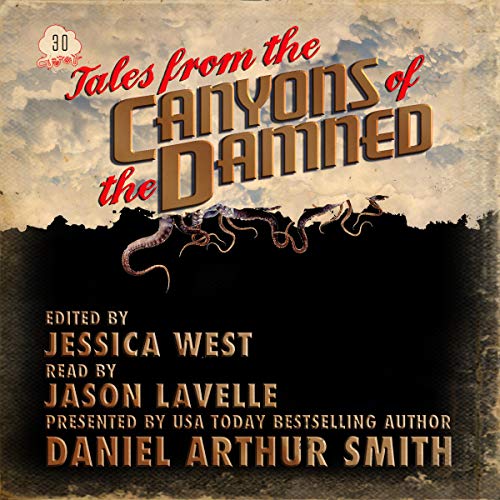 Tales from the Canyons of the Damned: No. 30

List Price: $6.95
You Save: $0.87 (13%)
By completing your purchase, you agree to Audible’s Conditions Of Use
Sold and delivered by Audible, an Amazon company
Share

Rebecca A. Corvello
5.0 out of 5 stars Excellent series highly recommend it!
Reviewed in the United States on April 14, 2019
Verified Purchase
Wow. I found myself so engrossed in these stories that I bought the entire series after reading the first story! Fabulously written, great stories. Highly recommend this to everyone.
Read more
Helpful
Report abuse

Kindle Customer
4.0 out of 5 stars Ok Read
Reviewed in the United States on January 12, 2019
Verified Purchase
I enjoyed most of the stories in this book. Some of them were very interesting and all of them were different. All of the characters were good.
Read more
Helpful
Report abuse

Chris Fried @ The Indie Athenaeum
5.0 out of 5 stars Jump into electrifying realms that give you goosebumps in this captivating collection of tales!
Reviewed in the United States on April 6, 2019
In this thirtieth issue of Canyons, we get a host of new stories dealing with time-traveling threats, lost children, deadly stalkers, otherworldly hauntings, and mythical creatures. Each one is riveting and will stimulate the dark corners of your imagination. Check out these five stories, starting with:

Jeremy Essex’s “Something Bad” – Maureen is a workaholic staying late at the office by herself when she sees something outside her window, somehow recognizing that it’s something bad. But what is it and why does she feel so uneasy about it? The whole story gave me the chills and once it revealed its secrets, I was disturbed and surprised by how it all came together.

M. Regan’s “On a Front Porch on a November Afternoon” – A woman lost her iPhone and backtracked to try to find it. As night falls and she still cannot find it, she runs into a young boy playing hide and seek. So, why does this situation feel so sinister? How the two stories intersect gave me goosebumps and had me turning pages in suspense to find out what is really going on here. It also has an ending that completely creeped me out.

Michael Ezell’s “The End of the World and a Super 88” – Martin is a soldier whose unit gets an emergency call about a portal opening. But when fifty armored knights on horseback come out of it and massacre civilians, all hell breaks loose! This is only the beginning of this delightful and dark time travel adventure filled with bloodshed and battles like you’ve never seen. It’s crazily wacky but in a scary and serious way. The sheer lunacy of its premise is a work of pure imagination that is only overshadowed by the deft use of its engaging premise and the unexpected twists this tale takes.

Lara Frater’s “Winning in Real Estate” – Sandy is a shady real estate investor trying to build luxury condominiums and turn a profit. But when his foreman reports the devil is disrupting the construction, he tries to the site to handle the problem himself. But how will the devil respond? Sandy’s attempted efforts lead to a chilling and scary confrontation with an unanticipated ending that simultaneously made me laugh and my jaw drop.

Daniel Arthur Smith’s “The Lost Tapes – Shane Starr” – Agents Muldoon and Meyer meet with celebrity Shane Starr, a documentary filmmaker, and survivor of a doomed Himalayan expedition. Exploring how he got so injured, Shane tells a tale about how something was stalking their camp. But how did he survive? An engrossing tale of chasing what once was thought extinct and the perils of overconfidence in a battle of man versus beast.

Each one varied with different ideas being explored, yet all of them grabbing you and demanding that you don’t put down the book until the tale is told. It has two authors who are new to me and three I’ve read before in the Canyons series. But all of them continue to set a high bar for high-quality storytelling that continues to enrapture me.
Read more
Helpful
Report abuse
See all reviews
Back to top
Get to Know Us
Make Money with Us
Amazon Payment Products
Let Us Help You
EnglishChoose a language for shopping. United StatesChoose a country/region for shopping.
© 1996-2021, Amazon.com, Inc. or its affiliates