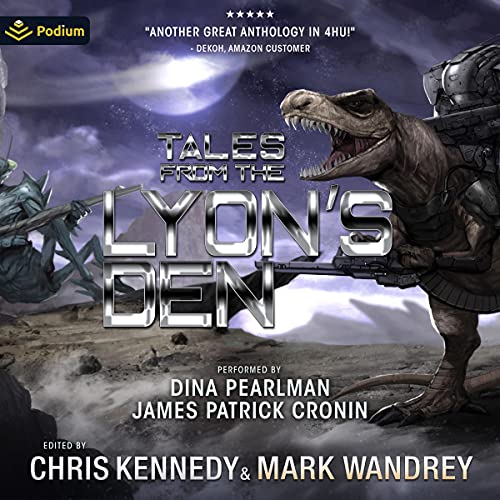 Do you have what it takes to enter the Lyon's Den?

From the outside, the Lyon’s Den doesn’t look like much; there isn’t even a sign. But mercs of all species know that if you head to Southwest Houston, near the starport, there’s a particular rundown strip mall that looks like it’s been abandoned for years. The glass door second from the south end of the strip is plastered over on the inside with blue paper, and the faint golden outline of a rampant lion is the only clue.

The door is locked, of course, and beyond the door is nothing but a darkened hallway with a downward slope and a slight curve to it. Once you follow this curve far enough, you are greeted by two very large, very well-armed Lumar. “Welcome to the Lyon’s Den,” the larger of the two says without a translator and without a trace of an alien accent. “You know the rules?”

Welcome back to the Four Horsemen universe, where only a willingness to fight and die for money separates humans from the majority of the other races. Edited by best-selling authors and universe creators Mark Wandrey and Chris Kennedy, Tales from the Lyon’s Den includes 18 all-new stories in the Four Horsemen universe by a variety of best-selling authors - and some you may not have heard of...yet.

Want to know what it’s like to do search and rescue while a battle is going on or what to do with that new manufactory you just won in a card game? Better learn the rules to the Lyon’s Den...and then step inside!

4.7 out of 5 stars
4.7 out of 5
89 global ratings
How are ratings calculated?
To calculate the overall star rating and percentage breakdown by star, we don’t use a simple average. Instead, our system considers things like how recent a review is and if the reviewer bought the item on Amazon. It also analyzes reviews to verify trustworthiness.
Top reviews

Kevin N. Sharp
5.0 out of 5 stars Chills
Reviewed in the United States on October 1, 2018
Verified Purchase
Go read the 4HU universe...Get caught, then come back. Then you will have chills. Its not the airconditioning from the Lyons generators. Its the weaving of back story, the insights and the amazing quality of excellent stories. This might even be better than a fistful of credits!
Now I have even more authors whos books I need to track down and read. Thank you Kacy, Wolf, Winder and Taylor!! All of you. I was up until 2am crushing this bad boy.
Read more
7 people found this helpful
Helpful
Report abuse

Human’s continue to scrap and scratch out a place in a hostile galaxy where might makes right and the pursuit of credits dominates the lives of billions.

This anthology of short stories is another example of great military sci-fi from the team. Can’t wait for more.
Read more
8 people found this helpful
Helpful
Report abuse

Dekoh
5.0 out of 5 stars Another great anthology in 4HU!
Reviewed in the United States on September 30, 2018
Verified Purchase
Lots of stories in the Four Horsemen universe; stories shortly after Alpha Contracts to near current 4HU events. All stories are good, a couple of standouts for me were Lucky, Deadly Dutchman, Return to Sender, and A Mother's Favor.
Read more
7 people found this helpful
Helpful
Report abuse

Christopher W
5.0 out of 5 stars Something for everyone.
Reviewed in the United States on March 11, 2019
Verified Purchase
I was quite pleased with the quality and variety of the stories included in this collection. An excellent selection of some accomplished and talented authors. You're going to want to read prior novels and stories from previous anthologies to better understand and appreciate these tales. Just start reading the books from this ever growing Four Horseman Universe. I believe that you won't regret that decision, at all.
Read more
Helpful
Report abuse

kindle avid reader. GW
5.0 out of 5 stars A lot of good short stories.
Reviewed in the United States on November 2, 2021
Verified Purchase
Like most anthologies, some good, some great , some not so great. But all to the readers likes and dislikes. Of course fantastic Depic story by Kacey included. I Thank all the writers for the time they spent writing and CK for bringing them to me, for a few more enjoyable hours spent reading.
Read more
Helpful
Report abuse

Rogue Blackheart
5.0 out of 5 stars You did it again folks
Reviewed in the United States on October 13, 2018
Verified Purchase
Made me laugh, made me cry and saved a kitty. I Read new authors(to me), and old familiar authors and by old, I don't mean age, but welcomed from previous readings.
Read more
One person found this helpful
Helpful
Report abuse

Kenneth D.
5.0 out of 5 stars Very cohesive for multible authors.
Reviewed in the United States on November 9, 2019
Verified Purchase
I want more of these books! Not even a fan of short stories and i cannot get enough of these.
Read more
Helpful
Report abuse
See all reviews

Scott Osmond
5.0 out of 5 stars Awesome Collection
Reviewed in Australia on February 14, 2019
Verified Purchase
As I've said in previous reviews containing collections of stories it's usually a hit and miss experience. Not with the 4 Horsemen collections. All the stories in this one were worth reading and expanded the universe. We get a look at the merc world and not all companies or contracts have happy endings. Ground and space adventures abound but I have a weak spot for the Depic. Psycho killer kitties in spaaace!
Read more
Report abuse
See all reviews
Back to top
Get to Know Us
Make Money with Us
Amazon Payment Products
Let Us Help You
EnglishChoose a language for shopping. United StatesChoose a country/region for shopping.
© 1996-2021, Amazon.com, Inc. or its affiliates