You've subscribed to The How To Talk! We will preorder your items within 24 hours of when they become available. When new books are released, we'll charge your default payment method for the lowest price available during the pre-order period.
Update your device or payment method, cancel individual pre-orders or your subscription at
Your Memberships & Subscriptions
There was an error. We were unable to process your subscription due to an error. Please refresh and try again. 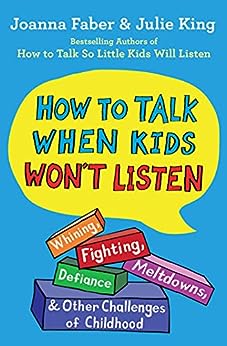 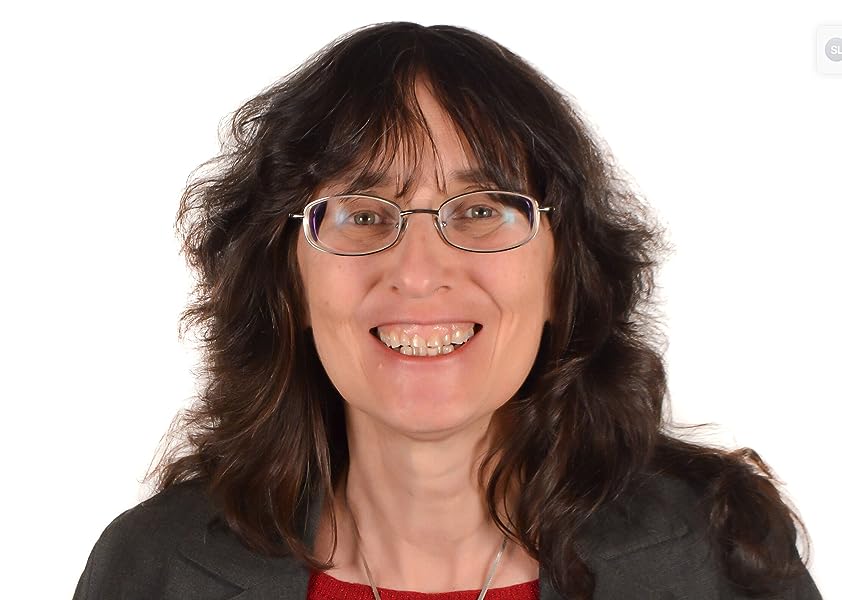 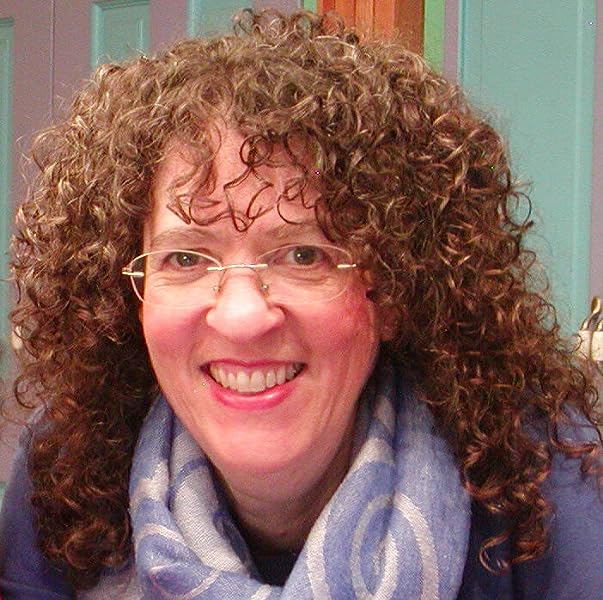 How to Talk When Kids Won't Listen: Whining, Fighting, Meltdowns, Defiance, and Other Challenges of Childhood (The How To Talk Series) Kindle Edition

by Joanna Faber (Author), Julie King (Author) Format: Kindle Edition
Part of: The How To Talk (4 books)
See all formats and editions
Sorry, there was a problem loading this page. Try again.
Read more Read less
Previous page
Next page
Due to its large file size, this book may take longer to download 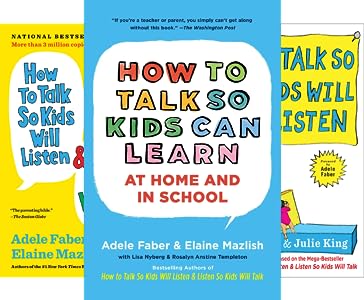 The How To Talk
Adele Faber
Kindle Edition

Joanna Faber is the author, along with Julie King, of the book, How To Talk When Kids Won’t Listen, as well as the bestselling book How To Talk So Little Kids Will Listen, which has been translated into 22 languages worldwide.  Joanna and Julie created the companion app, HOW TO TALK: Parenting Tips in Your Pocket, as well as the app Parenting Hero. Joanna also wrote a new afterword for the thirtieth anniversary edition of the classic book, How to Talk So Kids Will Listen & Listen So Kids WIl Talk, coauthored by her mother, Adele Faber. Joanna contributed heavily to her mother’s book, How to Talk So Kids Can Learn, at Home and in School, with her frontline experience in the classroom as a bilingual special education teacher in West Harlem. Joanna lectures and conducts workshops across the US and internationally for parents, educators, and other professionals who work with children. She and her husband raised three sons in the Hudson Valley region of New York, along with dogs, cats, and an assortment of chickens. Visit her at How-to-Talk.com.

Julie King  is the author, along with Joanna Faber, of the book, How To Talk When Kids Won't Listen, as well as the bestselling book, How To Talk So Little Kids Will Listen, which has been translated into 22 languages worldwide. Julie and Joanna created the companion app, HOW TO TALK: Parenting Tips in Your Pocket, as well as the app Parenting Hero. Julie has been educating and supporting parents since 1995. In addition to consulting with individual parents and couples, she speaks and leads workshops online and in-person for schools, nonprofits, businesses and parent groups across the US and internationally. Julie received her AB from Princeton University and a JD from Yale Law School. She lives with her husband in the San Francisco Bay Area where they are visited often by their her three grown children. Visit her at JulieKing.org, on Facebook @FaberandKing, or on Instagram @howtotalk.forparents.

4.7 out of 5 stars
4.7 out of 5
38 global ratings
How are ratings calculated?
To calculate the overall star rating and percentage breakdown by star, we don’t use a simple average. Instead, our system considers things like how recent a review is and if the reviewer bought the item on Amazon. It also analyzes reviews to verify trustworthiness.
Top reviews

Jana H
5.0 out of 5 stars Great Parenting Book
Reviewed in the United States on August 3, 2021
How to Talk so Little Kids Will Listen, Listen so Little Kids Will Talk is one of my favorite parenting books. I recommend it to all my friends and family who have kids. When I saw Joanna and Julie had a new book coming out, I knew that I would read it. Especially when I have a child, who despite using the techniques in their first book, does not listen often.

The first part of the book is a small recap or reminder of the important topics discussed in their first book. Acknowledging feelings, engaging cooperation, offering choices, problem solving, praise etc etc etc. The second part of the book provides more examples of how to put these techniques into practice. To be honest, it was more or less an extension of their last book. Only there are more examples of how to apply these skills in your parenting. The examples are more specific and therefore more helpful. I found it useful because if a parent is having an issue with a particular battle, like sharing or homework then can flip to that specific chapter for tips.

I love the writing style of these two authors. It has great flow and they provide plenty of examples of how to put this into practice and when/how it worked for others. Each section ends with a recap which is helpful. The writing isn't dry or hard to follow which can be common in other parenting books. The way the book is formatted makes it easy to skip the sections that don't apply to you at the time.

I won't lie, while I enjoyed reading this book, I kept saying in my head "but what about a kid like mine? A kid who really doesn't respond well when I acknowledge his feelings which doesn't allow me to put the other skills into practice" and then they had a whole section for me which was titled "Troubleshooting" There was some good ideas that I could try to put into practice in the future with my challenging child.

Overall, I really enjoyed this book and the authors get another 5 stars from me. I feel like this book is coming out at the perfect time. After being home with my kids for the last 16 months because of COVID, I realized that I had defaulted away from acknowledging feelings and engaging cooperation. I slipped back into some of the ways I used to parent before reading their first book. This book kind of gave me a bit of a reboot which I am grateful for. It was a refreshing read and makes me feel rejuvenated when it comes to parenting some of the challenging behaviors .

Pam
5.0 out of 5 stars Talking with Children
Reviewed in the United States on September 30, 2021
Verified Purchase
Lots of interesting ideas to try with children!! So glad I bought this book!
Book arrived fast and was in great condition!!
Thanks so much and have a nice evening~
Pam

LC
3.0 out of 5 stars Same concepts, new examples
Reviewed in the United States on August 8, 2021
This book is very similar to the other How to Talk books, but with different examples. At first it was hard for me to get into this book as the beginning shares concepts from previous books. The second section gets into new examples.

While the authors do acknowledge that there is not one right response I wish they had dove deeper into “when kid’s won’t listen.” For example in Chapter 13 Name-Calling and “Bad” Language they briefly touch on how to respond if you are feeling overwhelmed or dysregulated. This was really helpful and I would’ve liked more detailed explanations.

If you are new to the How to Talk books I recommend starting with a different book. If you have read the other books and think more examples would help you then this book might benefit you.

Happymama
5.0 out of 5 stars So helpful!
Reviewed in the United States on August 8, 2021
Parents, you need this book!! I have read a few parenting books in the past but this is now my favorite by far. I found it to be very relatable, user-friendly, and easy to follow. Being a parent is so challenging and I feel like we all need all the help we can get. In this book, there are a lot of everyday examples and there is practice at the end of chapters which I found to be super helpful! The practices gave me a chance to come up with what to say before implementing the scenarios with my own kids. While I read this over the past few days, I started to put in place some of the strategies in this book and they are working! I am seeing changes already in my kids when I speak to them differently and react to them following the techniques in this book. I am already ready to re-read this book so I have the strategies fully ingrained in my mom brain. This is a book I know I will be coming back to often for reference. I will be recommending this book to all my mom friends. This book is good for those with toddlers all the way to teenagers.

Thank you Net Galley and Scribner for a copy of this book in return for my honest review!
Read more
3 people found this helpful
Helpful
Report abuse

C. A.
5.0 out of 5 stars Realistic, helpful advice
Reviewed in the United States on September 2, 2021
This book and the others in the series have been life savers for me and my two sons (ages 3 and 7). This new version contains a really easy to understand summary of the basic ideas in the first books, which is very helpful. The real life examples make it easy to try out the concepts with my children. I notice that when I remember to use the techniques described in the book (sometimes, in the heat of the moment, it's hard to remember what to do), my interactions with my kids go much more smoothly and calmly. I'm thankful to have these ideas to use during fights and tantrums.
Read more
2 people found this helpful
Helpful
Report abuse

christyann74
4.0 out of 5 stars 4 stars
Reviewed in the United States on August 3, 2021
Full of useful information for anyone who works with kids and has communication struggles.

Tags that will help you discover similar books. 8 tags
in a seriesearly childhood educationschool-age childrenparentingself-helpcommunication & social skillsteenagersparenting & relationships
Results for:
Page 1 of 1Start overPage 1 of 1
Previous page
Next page
Where do clickable book tags come from?
Book tags are created from a variety of sources, some of which are customer-generated. Amazon is not legally responsible for the accuracy of the tags represented. If you are an author or publisher and would like to remove a tag associated with your title, please contact your vendor manager or publisher support team.