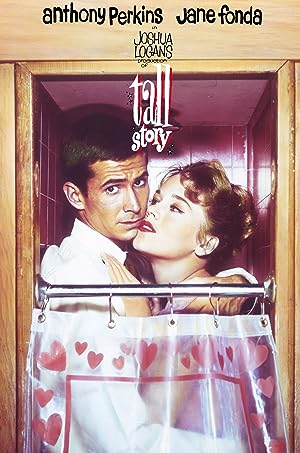 (112)
6.11 h 29 min1960ALL
In this college comedy classic based on the hit Broadway play, JaneFonda ("Klute") makes her screen debut as a husband-hunting co-ed whosnares a basketball hero (Anthony Perkins).

SociologyReaderReviewed in the United States on February 20, 2021
3.0 out of 5 stars
Worth seeing for a few reasons even though not a great film
Verified purchase
This film has some odd premises.... Jane Fonda goes to a college with a great basketball program because she wants to meet "a tall guy" (i.e., Anthony Perkins). They kiss and get engaged. He faces an "ethical" problem and gets quizzed by Ray Walston, his ethics professor.

I seriously had to go back and check the year of this film after I watched the first 15 minutes! It seems more like a film made in 1950 than 1960. This film was released in the same year as "Psycho," the film the ended up defining Anthony Perkins's career.

This is Jane Fonda's first film role! She is sweet and amazing and beautiful. She oozes stardom. It doesn't matter that it's a totally silly role. And -- Ray Walston is pretty hilarious as the ethics professor. The other interesting thing is that this is a totally lightweight comedy, yet Ray Walston and his wife (played by Anne Jackson) have an interfaith marriage (Catholic and Jewish). It is mentioned in passing but such marriages were very rare at that time (less than 3%) and interfaith couples faced much backlash. I don't recall seeing other films from around this time with interfaith couples -- so I found that quite interesting about this film!

And Fonda, later known for playing the kind of women who reject traditional domesticity, here she is gunning for a husband. She becomes a cheerleader just to be near him. But it's really more of the "sex kitten" role that Marilyn Monroe and Jayne Mansfield played in their early roles (according to Katrina Longworth, Jane was obsessed with Marilyn). This was her first movie, and while it's chaste, she holds this pose for about two minutes. She makes wanting to land a husband an act of defiance. She's so intelligent she throws off the role. Fonda's voice has authority and intensity, and it's impossible for her to giggle. In one scene, she and Perkins were stuck in a shower that wasn't running for about 3 minutes, and Perkins - well-known for not really being into women - doesn't seem the least bit aroused. It's striking because HE, potato-faced, rail-thin, kind of creepy Anthony Perkins, is the object of desire.

The plot, involving Perkins being told to throw a basketball game, is pretty neh. But it is the only movie I can think of where the name "Jeremy Bentham" is uttered (he has to pass an ethics test from goofball ethicist Ray Walston).
4 people found this helpful

LauraReviewed in the United States on December 28, 2017
5.0 out of 5 stars
Anthony Perkins gives a good performance in this movie. It's a shame we didn't see more Anthony Perkins roles like this one.
Verified purchase
Anthony Perkins gives a good performance in this movie. Jane Fonda also gives a good performance in this movie.I love this film. Jane Fonda is darling and Tony Perkins is adorable. In this romantic comedy, a young basketball star proposes to an intelligent coed while attending Custer College. She accepts, and he begins to worry about how they will make enough money to survive. He finds himself tempted to take a gambler's bribe and throw the game during an upcoming match.Released the same year as Hitchcock's classic thriller "Psycho," "Tall Story" shows the charming, naive and humorous side of Perkins. He stars as Ray Blent. Unfortunately, we didn't see more Perkins characters like this one because the actor was typecast as a psychotic madman following his admittedly excellent portrayal of Norman Bates in "Psycho." This movie shows the virtuosity of a great actor who regretfully didn't get the chance to demonstrate his full range of acting skills more often.
3 people found this helpful

Movies R UsReviewed in the United States on June 1, 2021
4.0 out of 5 stars
CAMPY MOVIE TRUE TO 1960
Verified purchase
OOD CASTING. FUN & QUIRKY.
>THE CAMERA LOVES JANE FONDA IN HER DEBUT ROLE.
>GARY LOCKWOOD APPEARS AS ONE OF THE RUSSIAN BASKETBALL PLAYERS. LATER IN HIS CAREER HE WOULD SHARE THE LEAD ROLE IN:
2001, A SPACE ODDYSEY
>MURRAY HAMILTON PLAYS THE COACH, HE WOULD GO ON TO PLAY MR. ROBINSON IN THE 1967 MOVIE: THE GRADUATE

D. MartinReviewed in the United States on January 29, 2013
5.0 out of 5 stars
Unusual for Tony, a comedy!
Verified purchase
I remember watching this movie as a child. Every afternoon they showed old movies and I watched them with my mother when she had time. I first saw many movies on this program starring Bette Davis, James Dean, and Norma Shearer. "Tall Story" was one of these, and I'm glad I got to see it before the ancient times of "Leave It to Beaver", and "Ozzie and Harriet" were over. I liked it, especially when Jane Fonda and Tony sang. The movie is based on a Broadway success, with good writing and solid performances. When I got this and watched it again, I felt bad that Anne Jackson didn't get to do more films. I enjoyed her much more than her husband, Eli Wallach, who did so many movies. Of course, Ray Walston is terrific. Tony is a little broad playing comedy, but nice. Jane Fonda oozes sex appeal. I would have preferred Tuesday Weld in the role, but she probably would have looked too young next to Tony. Anyway, I can recommend this, especially if you like the stars.
2 people found this helpful

TreyReviewed in the United States on April 4, 2013
4.0 out of 5 stars
Charming Romantic Comedy
Verified purchase
One of The first projects, if not the first for Jane Fonda. Also a chance to see Anthony Perkins before he was type cast in Psycho. Charming , old fashioned romantic comedy with the bubbly Jane and the painfully shy Tony. For the observant movie fanatic like myself, a chance to see Gary Lockwood as a Russian basketball player, an American actor. You may remember him from the second episode of the Original Star Trek, opposite Sally Kellerman ( Mash, hot lips Hoolihan) as super espers with God like powers. A must for lovers of nostalgia and romantic comedies!
3 people found this helpful

Mary Jane StoneReviewed in the United States on June 6, 2013
5.0 out of 5 stars
Rediscovered Comedy of Distinction
Verified purchase
A group of the best comedy talents of the time team up to lampoon the Cold War and systematic husband hunting in one offbeat story. Fonda's June is the beauty who transfers to Custer College because it has a thriving basketball program and she is "tall for a girl," and ready to use her brainpower to find a tall husband. It works spectacularly and quickly, but complications ensue when Custer is scheduled to play a touring Russian team and June's prize catch catches wise to her plan. A professor's happy wife sees June as herself at a younger age and steps in to help. Discover this nearly forgotten gem and with it some vintage 1960 humor.
One person found this helpful

Marilyn FanReviewed in the United States on December 29, 2015
4.0 out of 5 stars
Fonda and Perkins are Delightful!
Verified purchase
My wife insisted that I catch up on a classic film, to see Anthony Perkins and Jane Fonda in a very happy, funny, sweet production. It was an enjoyable light-hearted film. Fun to see Fonda act such a beautiful doe-eyed love-struck clinger to the handsome basketball hero. Some risque innuendos and sexual references. Ray Walston stole some scenes acting as a professor.
4 people found this helpful
See all reviews
Back to top
Get to Know Us
Make Money with Us
Amazon Payment Products
Let Us Help You
EnglishChoose a language for shopping. United StatesChoose a country/region for shopping.
© 1996-2022, Amazon.com, Inc. or its affiliates