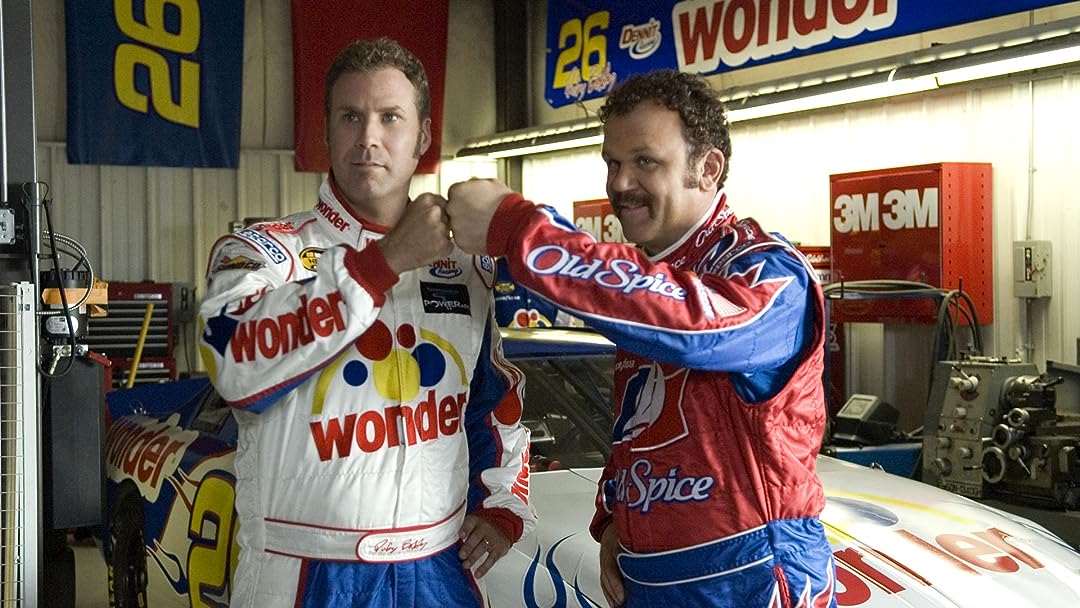 (21,004)
1 h 47 min2006X-RayUHDPG-13
NASCAR driver Ricky Bobby (Will Ferrell) stays on top thanks to a pact with his best friend, Cal Naughton, Jr. (John C. Reilly). But when a French Formula One driver makes his way up the ladder, Ricky Bobby's talent and devotion are put to the test.

influence peddlerReviewed in the United States on August 31, 2019
3.0 out of 5 stars
buy the regular version.
Verified purchase
I love this movie and have watched it tons of times and quote it randomly. I watched the unrated version for the first time this year with my girlfriend who had never seen the movie. It was a mistake, the added content of the unrated version throws off the comedic timing in tons of scenes with added fluff that isnt funny and separates the good jokes out weird. i own directors cut, extended versions, etc for most movies I own. This is not the movie to do that on. Buy the regular one, i promise the extended content hurts this movie rather than helps it.
43 people found this helpful

Elizabeth BReviewed in the United States on December 4, 2017
5.0 out of 5 stars
“Shake & Bake!!!”
Verified purchase
This is such s funny movie!! We have watched it at least 6 times and it still makes us laugh every time. My husband and his best friend can quote almost every line. Every time I order crepes, we end up joking about “very thin pancakes”. The cast is awesome. You can’t go wrong with Will Farrell and John C. Reilly (Stepbrothers is hysterical, too). The all-star cast includes Sacha Baron Cohen, Molly Shannon, Jane Lynch and even a cameo by a very well known nascar drive. Here’s a hint... his father was a very “Intimidating” nascar driver. Make sure you watch the credits. The sponsorship scenes are hilarious. Talladega Nights may not be an Oscar winning film but it is definitely worth watching if you want to laugh. (It did win a lot of the contemporary awards like MTV movie award, People’s Choice award, Teen Choice awards and more).
12 people found this helpful

DJReviewed in the United States on July 19, 2022
4.0 out of 5 stars
Funny as it gets, but....the regular version is better.
Verified purchase
**** UNRATED and UNCUT WIDESCREEN EDITION ****

This is a REALLY funny movie...& I've been watching it on Amazon Prime, many times over. The problem with this version is (the added scenes) REALLY takes away from just how hilarious this movie truly is. It throws the movie off; the comedy timing isn't the same here.

I've read many other reviews saying the same thing as I am. It is still very funny, but try to find the "regular version" instead of the UNCUT & UNRATED version. Adding on scenes such as referring to a fan as Larry Bird, & others like it...such as Ricky Bobby being on a bus, isn't in the Prime version. Sometimes less is more...& if it's not broken...don't fix it. Not sure why directors, editors, etc...do this.

** Update: I was able to return it & buy the regular version. Such a difference! Now, I have the version that made me like this movie so much.

joel wingReviewed in the United States on March 1, 2021
4.0 out of 5 stars
A perfect comedy
Verified purchase
Talladega Nights might be the greatest collaboration between director Adam McKay and Will Ferrell and John C. Reilly. This is a perfect comedy. It is ridiculous like when Reilly tells rival driver John Girard (Sacha Baron Cohen) “Shake and bake!” to his total confusion. There’s the rivalry between Bobby and Girard out on the racetrack that ends in a footrace. Let’s not forget Bobby’s two foul mouthed kids Walker (Houston Tumlin) and Texas Ranger (Grayson Russell). They literally steal every scene they’re in with their smart mouths. Plus Bobby’s drugged out dad played by Gary Cole who told him “If you’re not first your last” which became Bobby’s mantra throughout his life. You could tell they had fun making this movie and it comes across on the screen.
2 people found this helpful

LathropReviewed in the United States on October 29, 2018
1.0 out of 5 stars
“Free” Digital copy won’t redeem on VUDU
Verified purchase
SONY alleges that the DIGITAL COPY that you’ve paid for with this disc is “free.” If it’s “free,” then exactly why does Amazon charge us for it and the SONY casing says “BLU-RAY/DIGITAL HD.” Is the Blu-ray “free” too? Am I just paying for the packaging?!?

Regardless, this “free” Digital HD code doesn’t redeem on VUDU Ultraviolet as advertised, wasted an hour on the phone with Walmart/VUDU to finally come to that. You can spend another hour’s time gathering up pictures, receipts and DNA and wait for a few months for VUDU to consider if you have a valid case.... but this is a throwaway Will Ferrell movie and not Nazi gold.

Easier to return to Amazon. Maybe the more people simply reject purchase when their “free” digital movies don’t redeem rather than jump through infinite hoops for the studios and streaming services, they may get the hint and stop this BS.
7 people found this helpful

Michael Reviewed in the United States on July 2, 2019
1.0 out of 5 stars
Not even funny for Will Farrell
Verified purchase
Much the same as Jim Carey and Adam Sandler, Will Ferrell plays a variation of the same character in MOST (not not all as in the above mention actors have also done a few very good movies) films. This is no exception. The humor is low brow and predictable and the acting poor.
8 people found this helpful

Avid readerReviewed in the United States on July 7, 2022
3.0 out of 5 stars
Meh!
Verified purchase
I had more hopes from the trailer, but for the movie, it just didn’t seem to snap all that well. Too many of the jokes fell flat, or were simply offensive, such as the saying Grace at the table. And I didn’t feel the comedic talents meshed that well. It is an all right movie, just very forgettable. I feel Will Farrell has had better comedic hits. Maybe it was due to the Amazon version.
One person found this helpful

my morning reviewReviewed in the United States on August 19, 2022
5.0 out of 5 stars
And the Always delicious Taco Bell.
Verified purchase
this is a hillbilly. shaming romp through Nascar goofballs who are best friends forever and all the ridiculous characters we call our family.
Great lines from this comedy have become staples in our (me and folks who watch this movie over and over) lives. like... my friend recently wrote 'I am nine pounds eight oz. baby Jesus happy.'
This movie makes us laugh and laugh and I personally have some weird satisfaction when he goes home to mama. I wish i still had a mama to go home to. Reminds me of Olympia back in the day.
Shake and Bake y'all
See all reviews
Back to top
Get to Know Us
Make Money with Us
Amazon Payment Products
Let Us Help You
EnglishChoose a language for shopping. United StatesChoose a country/region for shopping.
© 1996-2022, Amazon.com, Inc. or its affiliates