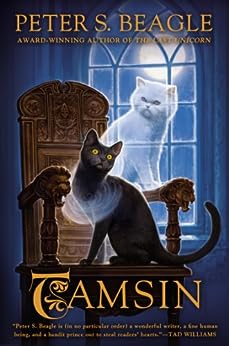 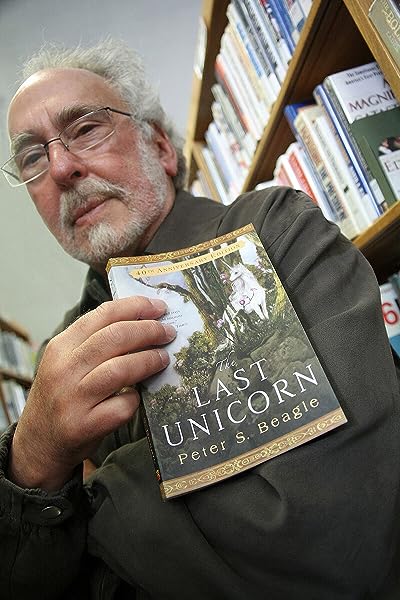 “Tamsin is a ghost story but, like anything else Beagle has written, transcends its genre. Beagle writes too sparingly for his fans, but he apparently cannot write a bad book.”—The Orlando Sentinel

“If you like ghost stories, if you like tales of boggles and boggarts and things that live just beyond our ken, then Tamsin will satisfy you completely. But be warned, Beagle's characters will stay in your heart forever, and he possesses the damnedest ability to make one cry by the end of the book. What reader can ask for more?”—Crescent Blues

“With…Peter S. Beagle novels, you know that what you're getting is something that has been lovingly and painstakingly crafted, and thus to be cherished. Tamsin…stands as another high-water mark in a career consisting of practically nothing but. Smashing storytelling…Electrifying entertainment in every way, Tamsin blends mystery, history, and the hope of love that blooms its strongest when you're very young, into a novel sure to become as dear to readers' hearts as The Last Unicorn.”—SF Reviews

“An appealing intermingling of history, folklore, and the supernatural.”—Kirkus Reviews

Peter S. Beagle was born in 1939 and raised in the Bronx, just a few blocks from Woodlawn Cemetery, the inspiration for his first novel, A Fine and Private Place. Today, thanks to classic works such as The Last Unicorn, Tamsin, and The Innkeeper’s Song, he is acknowledged as America’s greatest living fantasy author; and his dazzling abilities with language, characters, and magical storytelling have earned him many millions of fans around the world.

In addition to stories and novels Beagle has written numerous teleplays and screenplays, including the animated versions of The Lord of the Rings and The Last Unicorn, plus the fan-favorite “Sarek” episode of Star Trek: The Next Generation. His nonfiction book I See By My Outfit, which recounts a 1963 journey across America on motor scooter, is considered a classic of American travel writing; and he is also a gifted poet, lyricist, and singer/songwriter.

4.2 out of 5 stars
4.2 out of 5
92 global ratings
How are ratings calculated?
To calculate the overall star rating and percentage breakdown by star, we don’t use a simple average. Instead, our system considers things like how recent a review is and if the reviewer bought the item on Amazon. It also analyzes reviews to verify trustworthiness.

Gussie Fink Nottle
1.0 out of 5 stars Unreadable font
Reviewed in the United States on January 8, 2020
Verified Purchase
Is this a good book? Who knows? Not me, because the edition I got* is unreadable. It is printed in tiny, blurry font squeezed onto pages with abnormally wide margins. At least the outside margins are wide. The inner margins were bound too close to the spine so you have to break it to be able to see the words without tilting the book. Now I see what dyslexics mean when they talk about words swimming around on the page.

1.0 out of 5 stars Unreadable font
By Gussie Fink Nottle on January 8, 2020
Is this a good book? Who knows? Not me, because the edition I got* is unreadable. It is printed in tiny, blurry font squeezed onto pages with abnormally wide margins. At least the outside margins are wide. The inner margins were bound too close to the spine so you have to break it to be able to see the words without tilting the book. Now I see what dyslexics mean when they talk about words swimming around on the page.

Strafford11
4.0 out of 5 stars Recommended - one of my favorite authors
Reviewed in the United States on October 21, 2016
Verified Purchase
A Fine and Private Place is one of my favorite novels of all time, so I turned to Tamsin thinking that it might be a YA novel, but Beagle is always involving and imaginative. Where in fantasy are two cats this much fun? Mister Cat is the best character in the book. I think the development of the characters and the plot is excellent, and the celtic myths of the Pooka and the others are terrific; the land becomes a character in itself. My gripe is with the conclusion and the protagonist, who grumps her spoiled way through the novel, and in my mind is unlikely throughout. I recommend Tamsin as a successful Beagle creation; few in fantasy create imaginary and melancholy settings so well.
Read more
4 people found this helpful
Helpful
Report abuse

Paula Berman
5.0 out of 5 stars A lovable sort of book
Reviewed in the United States on October 8, 2017
Verified Purchase
It wasn’t the plot that sucked me in; the action only really gets going in the last third anyhow. It was the characters, and most of all the voice of the first-person MC, Jenny. Luckily she’s not too hard to describe; if you’ve read Dodie Smith’s I Capture the Castle or Jo Walton’s Among Others, and liked their narrators, that’s who she feels like to me. Though Tamsin, Meena, Julian and Mr Cat are worth the price of the ticket too, and it’s always pleasant to read YA where the parents are neither completely oblivious nor idiots, who step in when needed but give a teenager some space to be herself.
Read more
5 people found this helpful
Helpful
Report abuse

Joyce and James
1.0 out of 5 stars dissapointing
Reviewed in the United States on March 13, 2019
Verified Purchase
I got this book because I am absolutely in love with "The Last Unicorn" and wanted to read more by that author. it is written from the perspective of a teenage girl and it does not go over well. its painfully slow, the dialogue is unbearably cringy, its repetitive, and never really goes anywhere. I cant believe that its by the same author. the main character is even more whiny that Bella from "Twilight" and not as well developed. don't read this.
Read more
3 people found this helpful
Helpful
Report abuse

Carrie
5.0 out of 5 stars Now this is a book!
Reviewed in the United States on December 2, 2017
Verified Purchase
Ooo.... This is a good one. Ghosts and myths and romance, everything I could want now, and I can't wait to give this book to my teen daughter this Christmas, but this would suit most fantasy lovers, as well as fans of a good old fashioned ghost story. This book is timeless and modern all at once. I don't know what else to say, so just read it !
Read more
5 people found this helpful
Helpful
Report abuse

Ann L Black
5.0 out of 5 stars Fabulous story!
Reviewed in the United States on April 30, 2021
Verified Purchase
The book is great quality - but the real gem here is the story. You can't go wrong with Peter Beagle, author of The Last Unicorn - and he doesn't disappoint. The story is rich and riveting. Just get it - you won't be sorry! Everyone in my family has read this now - from 11 year old boy to 43 year old Dad and 2 others in between - and all have loved it.
Read more
Helpful
Report abuse

Jonathan Holmes
5.0 out of 5 stars Five Stars
Reviewed in the United States on February 16, 2018
Verified Purchase
A beautiful story by one of the greatest fantasy authors of the twentieth century.
Read more
4 people found this helpful
Helpful
Report abuse

Kindle Customer
4.0 out of 5 stars Enjoyable story
Reviewed in the United States on April 2, 2020
Verified Purchase
Held my attention well. A pretty light and easy read. I definitely could relate to Jenny as an angsty teenager and her future self looking back at how awful she could be. I think that helped make her a good protagonist in my eyes. I think after the halfway point the story felt a little dragged out. I wanted Beagle to get to the point a bit quicker (ie reveal more of the secrets quicker). I don't feel like some of what he had in there added much to the story. But not so much that I didn't want to finish the book. Overall it was enjoyable!
Read more
Helpful
Report abuse
See all reviews

Amazon Customer
5.0 out of 5 stars A Must Read!
Reviewed in the United Kingdom on July 15, 2017
Verified Purchase
One of the best books I've read in a long time! I only wish it was longer.
Read more
Report abuse

Amazon Customer
5.0 out of 5 stars Five Stars
Reviewed in the United Kingdom on April 7, 2017
Verified Purchase
Loved it as good as the other prayer beagle books I have.
Read more
Report abuse

V. Rose
5.0 out of 5 stars Boggarts and pookas, and ghosts, oh my!
Reviewed in Canada on February 27, 2015
Verified Purchase
Young New Yorker Jenny Gluckstein must move with her mother and her beloved pet Mister Cat to live with her new stepfather and stepbrothers in the English countryside. Once there, she is surprised to discover an exciting (and often frightening) shadowy spirit world that will forever change her.

Tamsin was such a lovely surprise. A book I almost didn't get, clumped in with bunch of other books I'd been dying to read; it wound up being my favourite of the lot. I'd been hesitant because, knowing it was a classic of the fantasy genre, and having read many rave reviews, I'd already read Peter S. Beagles The Last Unicorn; however, in spite of (or perhaps because of) this, ultimately, it hadn't quite lived up to my expectations. I thought the writing was wonderful, I just didn't really connect with any of the characters. Having said that, because Mr. Beagle is such a legend, I decided to give him another try, and boy am I happy I did! Tamsin wound up being completely and utterly gorgeous, and perhaps the thing I wound up loving most about it (besides Jenny's unique voice, which, in my opinion, is the best use of first-person narration since Dodie Smith's classic I Capture The Castle) was the setting. The modern time period, in combination with the authors flowing, classic writing style, was delightful. And because Jenny's voice felt so real, and her world was in many ways very similar to my own; I felt it made the fantastical elements that much stronger, and unnerving.. If, for example, while I had been reading it, a boggart had appeared in my kitchen, or a ghost had sat down on the end of my bed, I'm sure I wouldn't have been surprised at all...
All in all, I thought it was absolutely fantastic, and definitely worthy of five stars.
Read more
2 people found this helpful
Report abuse

law
5.0 out of 5 stars Five Stars
Reviewed in Canada on December 24, 2015
Verified Purchase
A fascinating ghost story and coming of age story. The side characters bring it to life.
Read more
One person found this helpful
Report abuse
See all reviews