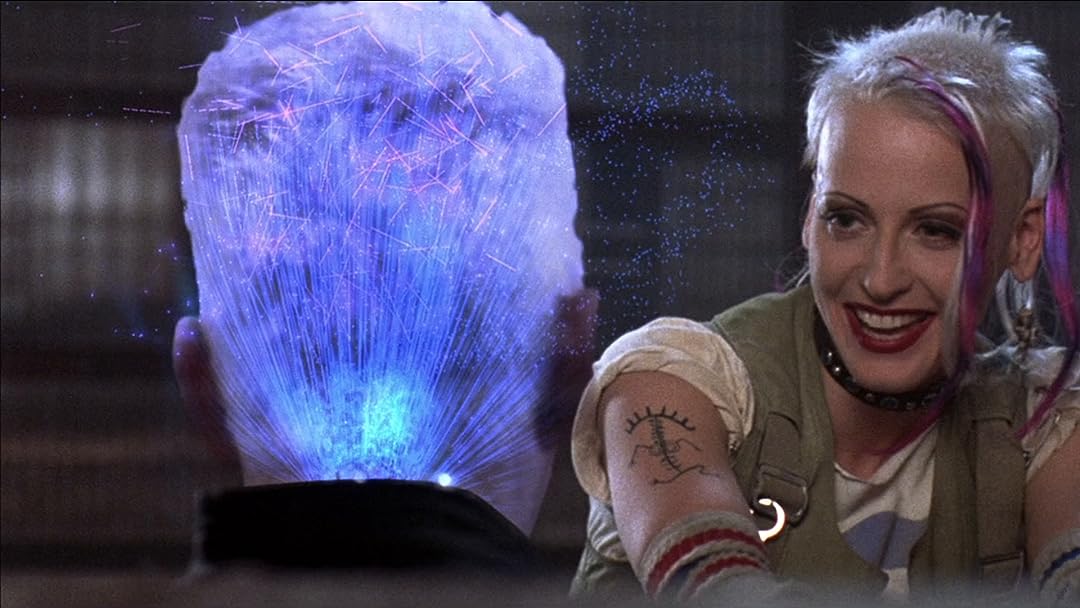 (2,262)
5.31 h 44 min1995R
In this laugh-a-minute, futuristic thriller, a mega-villain controls the world's water supply, and it's up to Tank Girl and her outrageous cohorts to end his greedy reign.

D. LarsonReviewed in the United States on July 24, 2019
3.0 out of 5 stars
Kind of wish I’d left it in the past
Verified purchase
Two comic book movies I remember from 1995: “Tank Girl” and “Judge Dredd”.

Despite the existence of Rob Schneider, “Judge Dredd” was fun because Sylvester Stallone looked exactly like the Judge himself. Uncannily so. Karl Urban never took off his helmet in the ugly and unnecessary 2012 remake, “Dredd” and otherwise did a fair impression of the Street Judge. Even so, the remake was a joyless, unpleasant tedious mess. Not a second of fun. Which brings us to “Tank Girl”.

Maybe the problem is that Lori Petty never looks like Tank Girl. Even in a scrappily drawn comic with minimal detail and sketchy backgrounding (at best), you have an idea what your character looks like, and Lori Petty wasn’t it. Which is pointed up by the frequent and jarring comic panels interposed rather too often into the live action. Lori Petty’s portrayal was way too glam to be Tank Girl. The comic had some of the scruffiest, most slap-dash stream of consciousness graphics of the era. Trying to translate that into live action just did not come off.

And yet, when this movie was new and MTV was a thing and I was much younger and probably influenced by substance ingestion, I remember thinking “Tank Girl” the movie was pretty cool. “Rad” as we used to say back then. When it cropped up on Amazon, I now thought “neato!”

Now that I’ve seen it with older and more judgmental eyes, I kind of wish I’d let it be a slightly pleasant memory. Because seeing it now, it’s pretty terrible. Malcom McDowell, almost always fun, isn’t. Talk about phoning it in. The great Stan Winston did the kangaroo guys, and despite a sizable budget, they look worse than the average Star Trek TNG alien of the week. Sorry, Stan, this one was a misfire. Those heads are not good at all.

And we’re halfway through the picture before we even see a tank, and when we do, it’s a sore disappointment. What is this, some Jeep tricked out with prosthetic treads? A bit of research shows that it’s mostly an ancient “Stuart” M5 (sourced from Peru, of all the places obsolete tanks get to) tricked out with some welded on Cadillac pieces. Let’s just say it ain’t no Abrams.

It’s tiny and utterly unconvincing. Tanks are like, big, y’know? And impressive? Can’t really say much about the jet, strictly an afterthought there. Jet Girl herself, Naomi Watts, does what she can with a superfluous part. She was really young!

Lori Petty hits her jokes way too hard, and the timing is sort of off, Mel Brooks style. And folks, if you want to throw in a Julien Temple style musical number, why not bring in Julien Temple? Because nobody can pull this stuff off like Temple did in, say, “Absolute Beginners”. Rachael Talalay did not display an aptitude for this inexplicable interlude.
Also, there is this creepy undercurrent of implied and not-so implied child abuse and sexual violence. In a comedy. Kind of jarring today. Unpleasant. Not funny.

Maybe I’m being too hard on this harmless girl power movie; its feminist heart was in the right place, I guess. It’s kind of amazing this comic was ever filmed to start with, and I find comic book purists tedious, the people who are forever complaining about any deviation from the printed canon and how the Submariner would never, ever do this or that. Speaking of which, Marvel, when do we get a Submariner movie? Aquaman as kind of a tiresome pill. But Namor, he had attitude! The Submariner could beat up Aquaman and make Aquaman’s girlfriend hold his jacket while he did it.

I digress. Iggy Pop has a momentary cameo and, as Rent Boy said, having to choose between taking his girlfriend out or going to the Iggy concert, “Well, yeah, but it’s Iggy Pop!” There are some nostalgic songs, Joan Jett sings “Let’s Fall in Love” accompanied by local hero Paul Westerberg (‘Mats Rule!), and there’s weird early stuff from Bjork. The whole thing is a throwback to when MTV existed and I was younger.

I’m going with a generous 3 stars, because “Tank Girl” did make me remember, however briefly, a bygone more optimistic time. And because it lost MGM 15 or 16 million dollars. Which was a big deal back then; now it’d be just a rounding error on a Marvel superhero movie.

AndriaReviewed in the United States on August 25, 2022
3.0 out of 5 stars
Fun for an early teen, Less so 25 years later.
Verified purchase
I watched this as a kid and it was one of those silly movies that you may watched several times on boring summer days while being stuck in the house if you were lucky enough to have HBO back then. I recall it being a fun movie and enjoying the silliness of it then but as an adult, just leave it in the past. It has plenty of action and that's about it. No real coherent story line except girl gets a tank and blows a lot of stuff up until she get to the main evil water guy. Oh, and Ice-T is in it as an angry kangaroo so there's that. The comic that it is based off is probably fun but I have no idea. And why did I think the main actress was Gwen Stefani as a kid?

Andrew SpiteriReviewed in the United States on July 14, 2022
5.0 out of 5 stars
Great
Verified purchase
Saw it before glad I bought it

joel wingReviewed in the United States on July 9, 2021
4.0 out of 5 stars
Arty surreal comedic postapocalyptic tale with a Punk Rock attitude
Verified purchase
If you like the weird and unique with a Punk Rock twist then you’ll like Tank Girl. It’s a post-apocalyptic story based upon a comic which is intersperse throughout the film. That along with the short cuts they make to highlight Tank Girl/Lori Petty give the movie a bit of an arty feel, and there are also surreal moments like the mutant kangaroos. Petty has the right Punk Rock attitude which is essential for the character. She also provides some laughs with her hijinks. Malcolm McDowell is a crazed villain, a very important element in movies like this. The first time he’s shown he kills one of his henchmen and then sucks the water out of his body as H2O is the most valued asset in the world. Tank Girl is different and goofy but it makes for a fun ride.

Paul WrightReviewed in the United States on July 26, 2021
4.0 out of 5 stars
Waay ahead of it's time!
Verified purchase
I saw this movie in the theater in 1995. Didn't make a big impression on me then. Watching it again 36 years later and it's a different movie to me in context of what's happened since then. This was based on a graphic novel that had a very punk "Gryll" power theme. I'm stunned at the societal changes that has been made since this came out.
A female director in 1995? That was unheard of then. Predicting a drought Apocalypse? Thye didn't see that it would not by comet but by industry climate change.
Predicting governmental/business fascism through control of "Water and Power"? That's very real right now in Texas and California.
Ice-T as a Ripper human/kangaroo hybrid? In 1995? WTF?
Malcolm McDowell excels as the quintessential bad guy.
Jet Girl is so Nerdy Hot!
Male dominated studio cutting edgy controversial scenes? Yep, that happened and sadly still a problem.
This movie could have been even better without studio interference.
Worth watching with an open mind!
Anybody that doesn't understand the director's core message of this unfortunately studio diluted movie is hopelessly clueless.
One person found this helpful

EKATAReviewed in the United States on March 10, 2021
5.0 out of 5 stars
LOVE. THIS. FILM. Great soundtrack, lots of FUN and actually ok for older kids.
Verified purchase
It’s so bad it’s AWESOME. One of my all time faves. Lori Petty makes a fun Tank Girl and Ice-T is the greatest, snarkiest mutant kangaroo ever! Naomi Watts as Jet Girl is adorable. Definitely having Malcolm McDowell as the supervillain was cute. Fun sets, fun costuming, GREAT & FUN soundtrack... it’s definitely a “cult” film and silly/campy.

If you’re a hardcore TG fan - this might not be the Rebecca you’re interested in. This Rebecca is a bit “bubblegum”. But I thought Lori Petty’s version was fun and adorable.

Actually, this is a fairly “kid-safe” movie. (Personally, I think more little girls need to know who TG is. ) If you’re a “cool parent”, this is a decent film for kids 12+. There IS a some violence but it’s mostly implied and/or *super* campy and one part where a “razor ball” cuts through a character’s hand (hint for refernence - Iggy Pop). Some really vague drug references - but kids won’t get it. I don’t recall any profanity or anything OVERTLY sexual (one of the mutant kangaroos IS perv but again, kids really won’t get it), they kept things fairly “clean”. If you take issue with firearms, I will warn you, there are a LOT of them. A good time fighting a bad guy and trying to get some water on a desert planet. My inner 12 year old had a blast. Fun animations too.

Son of SamhainReviewed in the United States on March 5, 2020
5.0 out of 5 stars
wildly energetic and fun
Verified purchase
That Lori, whatta showstopper! I watched this for the first time back in 97 or so and loved this girl! Shes also got great legs but Its her combative, pugnacious belligerence though thats so damned funny! This plot is cockamamie even among cockamamie comic book plots but thats okay, this a film that is best enjoyed with your brain on standby mode. Malcom is such a parody of villany you almost feel affection for his 'evil'...hes like Darth Vader :). When I first saw the scene with Iggy I swore he was Alice Cooper but that scene is funny regardless of who played the weirdo.
The scene where TG gets her ankles around the guys neck, breaks it then looks at his buddies with a look of innocence and says "what"?? ... THAT is FUNNY!!
The soundtrack is also pretty outstanding ( except for the piece done by Stomp , THAT , the soundtrack could have done without ).
I had this movie on vhs but I recently watched it again on Amazon prime . Its funny and wildly energetic , so much so that it goes into cartoon mode from time to time. I was very entertained by this film and , again , that Lori Petty was quite the showstopper , im sure shes been in other movies ect but im not really a movie/tv type but I may go nosing around to see what else she has done with her professional life. When I next get some downtime I may just watch this yet again. :)
3 people found this helpful

JupiterNadirReviewed in the United States on July 27, 2022
3.0 out of 5 stars
@first it was just toopid!
Verified purchase
It did evolve to fun to watch. But don't think,, just enjot the toopidity.
See all reviews
Back to top
Get to Know Us
Make Money with Us
Amazon Payment Products
Let Us Help You
EnglishChoose a language for shopping. United StatesChoose a country/region for shopping.
© 1996-2022, Amazon.com, Inc. or its affiliates