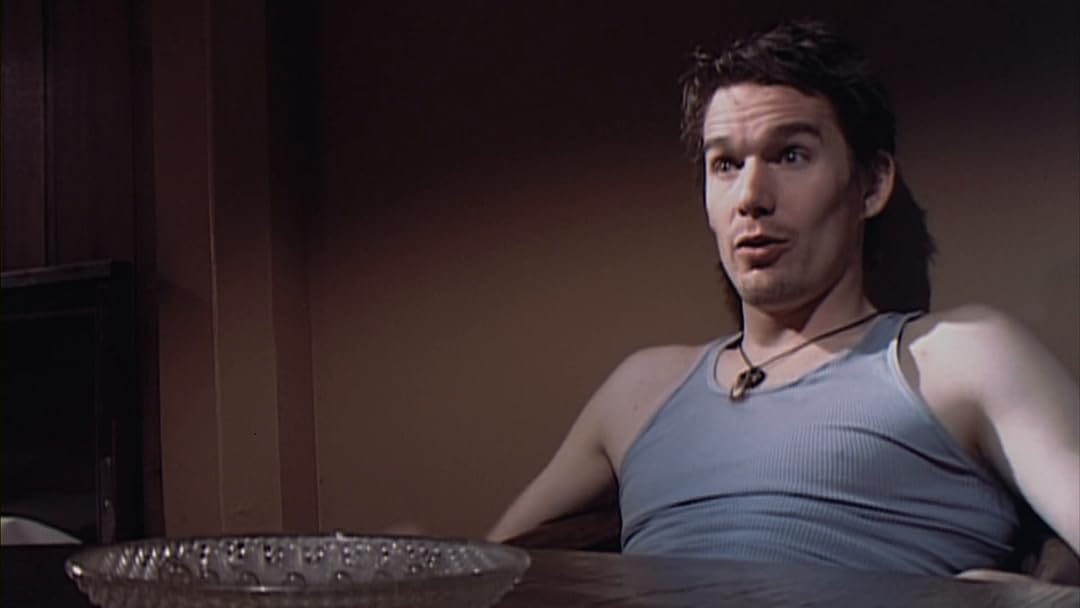 tpalmaReviewed in the United States on April 23, 2020
3.0 out of 5 stars
Actors Performance
Verified purchase
Performance very good by the actors but its all talk and I find it boring. No suspense at all. Regret buying it but I am a fan of Ethan Hawke so I will just keep the DVD for my collection for Ethan Hawke's movies.
One person found this helpful

Ms. ABCReviewed in the United States on September 14, 2021
5.0 out of 5 stars
Impressed
Verified purchase
I cannot believe how entertaining a movie that consists of 3 people talking in one motel room! Even more shocking -- after 1.5hrs of heated argument about a violet crime that happened 10 years ago, the movie actually ended in a uplifting 3-way-win for the characters! Wow.

Kindle CustomerReviewed in the United States on April 8, 2005
5.0 out of 5 stars
Another great Linklater film
Verified purchase
I started out to watch only the first five minutes and immediately became engrossed in the film. There was tremendous acting and energy in the film that made you almost forget the dinginess of the setting. When Uma Thurman blew in, it was like a breath of fresh air. Although the juxtapositioning of the actors was good when there were two in the room, three really brought out the film's artistry by the careful use of limited physical space. I also loved the projection of a drug user/seller with a brain--albeit, a slightly twisted one. Unfortunately, I thought the ending was too contrived and trivialized. I would have preferred an ending where the characters all learned something from the experience. It was such an opportunity to show how rape can really traumatize but Uma's flip and secure attitude about the experience projected an angry view that didn't scratch the surface. I hope Linklater brings these three back together for another similar type film--but fully tackles the issue next time.
4 people found this helpful

Christian GallardoReviewed in the United States on February 4, 2020
5.0 out of 5 stars
Great Movie
Verified purchase
Great actor, keep me entertained and everything just happens in a room and is just dialogs.

ZarathustraReviewed in the United States on August 6, 2010
5.0 out of 5 stars
A Worthy Successor to Before Sunrise and Before Sunset
Verified purchase
Richard Linklater's best films are mainly about intelligent conversations between interesting people. Tape is no exception. Ethan Hawke, Linklater's favorite protagonist, joins Robert Sean Leonard in a conversation which takes place entirely in a hotel room. The two males talk about their high school experiences. Their conversation seems to reach an impasse when Uma Thurman, playing a high school friend of both, knocks on the door. Then things really get interesting. Check it out.
3 people found this helpful

Karin LudewigReviewed in the United States on December 28, 2005
5.0 out of 5 stars
Highly Recommended and Highly Original:
Verified purchase
`Tape' is well written and well directed with first rate performances by Ethan Hawke, Robert Sean Leonard, and Uma Thurman, and like

Hitchcock's `Rope', `Tape' is also set in one room. But unlike Hitchcock's masterpiece, the room is a seedy motel in Lansing Michigan. Every inch of space is used - bathroom, beds -- the floor, in one instance during Vince's exaggeratedly athletic pushups, in another, as a fight breaks out just before Amy (Uma Thurman's) entrance; and finally when Vince, John, and Amy gather round a small table to rehash old times and old wounds.

Vince (Ethan Hawke) has come to Lansing either at the invitation of his old high school buddy, or out of curiosity, or simply to get even.

There is no violence and yet violence is at the core of the story.

As tension builds and agendas are revealed we see that there never was any friendship only rivalry, unrequited love, and youth.

`Tape' is a serious and thought provoking film satisfying and beautifully directed by Richard Linklater. The film's pace never lets up and though the dialogue covers the same ground over and over again it remains fresh coming always from a different point of view -- a credit to the excellent writing.

IG-thheonlyherReviewed in the United States on July 23, 2020
5.0 out of 5 stars
Worst movie I ever saw in my life
Verified purchase
Boring but disc great quality
One person found this helpful

kbReviewed in the United States on January 26, 2020
5.0 out of 5 stars
Riveting performances
Verified purchase
It felt like a play, which kept me riveted. Excellent performances.
See all reviews
Back to top
Get to Know Us
Make Money with Us
Amazon Payment Products
Let Us Help You
EnglishChoose a language for shopping. United StatesChoose a country/region for shopping.
© 1996-2021, Amazon.com, Inc. or its affiliates