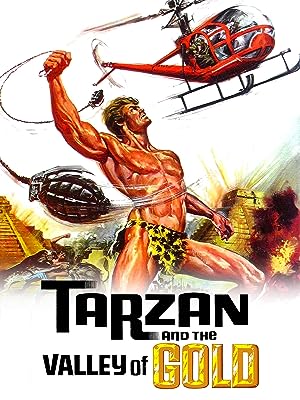 Tarzan and the Valley of Gold

(100)
6.01 h 40 min1966NR
Tarzan fights the evil Mr. Train, Vinaro's huge bodyguard, and rescues Vinaro's former mistress, who has been left to die with an explosive around her neck.

Michael A. BlackReviewed in the United States on October 28, 2020
4.0 out of 5 stars
Interesting Reboot of the Tarzan Character
Verified purchase
Edgar Rice Burrough's immortal character, Tarzan, was depicted in various ways in the movies. In the late 1950's Sy Weintraub was put in charge of the movie franchise and did a reboot of the character, moving away from the "Me Tarzan, you Jane" hero to one who was more of a literate adventurer. He dropped Jane and Boy in Gordon Scott's final two Tarzan movies, and went with Jock Mahoney for another trio before signing ex-football player, Mike Henry, for the role. Henry was arguably the most picturesque actor to portray the ape man, and proved to be a competent actor. in this one he starts out in a suit and tie and even dispatches a villain with an enormous Coke bottle display. He also picks up a gun and shoots at the bad guys. The intention was to make Tarzan into a James Bond type. While the movie is not without a few flaws, it is highly entertaining and worth watching. The screenplay was written by veteran screenplay writer Clair Huffaker, who was very talented. He wrote western novels and screenplays (The War Wagon with John Wayne and Kirk Douglas was one of his efforts based on his novel, Badman.) Henry's climactic fight with the villain's giant henchman could have been better, but it's well worth waiting for. The screenplay was also turned into a full fledged novel by fantasy author Fritz Leiber, and was authorized by the Burrough estate to be part of the Tarzan canon. The movie certainly rates as one of the best Tarzan movies. If you're a fan of the ape man, check it out.
One person found this helpful

Don GaddisReviewed in the United States on January 31, 2016
1.0 out of 5 stars
Amazon lists this as a DVD, but it is actually DVD-R
Verified purchase
This is a review of the product as manufactured and represented by Amazon, not the actual film itself. Other buyers be warned. Amazon lists this product incorrectly. It is not a DVD. It is a DVD-R. I wasn't able to tell until I actually received the item and opened it. The Amazon website lists it as a DVD, and the case itself says that it is a DVD, but the actual disc is a burned file (you can visually tell from the blue hue of the disc). What this means is that I'll be able to play the disc once or twice within the next year or so before the carbon begins to break down, causing the film to skip and be afflicted by digital square blips of missing information.

I was wary because other Tarzan films were listed as DVD-R. I specifically purchased this one because it was the only one of the lot to be listed as a DVD. The cost for this film is around $15 or $17 I believe (after shipment)–which, for a DVD that is fine, but because of the inferior quality of a DVD-R, this should've been no more than $9 or $10. Hopefully someone employed by Amazon will read this and correct the listing information.

I'm not sure whether to return it or not, as from what I can tell, the film is out of print, as are several other Tarzan films. If I keep the DVD-R, if I want to have the film last, I'll need to transfer it to a VHS tape. I'd have to do this because even if I don't watch it, the DVD-R breaks down over time/just sitting there, even without me playing it. Luckily I have a VCR and the means to do this/I don't mind VHS. At least the VHS will last. Because the film is stored on a DVD-R, the image is going to be VHS quality regardless. And as a lover of film, I want to be able to watch the film multiple times on a TV, not view it through a phone or computer as a stored file. Frustrated to say the least!

THX1138Reviewed in the United States on February 15, 2017
4.0 out of 5 stars
Suffers only of the time it was made.
Verified purchase
I watched this flick when a kid and enjoyed it, despite laughs about it from family members. I finally got to watch it again -- and enjoyed it again. I also came to understand the laughs. It wasn't the story, which is pretty good. It wasn't the acting, as that is good as well. It was the hipster theme and background music that just doesn't fit a Tarzan flick. If you can stand that, it is worth a watch.

Mike Henry will forever be a great and under rated Tarzan.
4 people found this helpful

SwinscowIslingtonReviewed in the United States on June 26, 2014
4.0 out of 5 stars
Slickest Tarzan of them All
Verified purchase
I always liked this movie. The 1959-61 Gordon Scott Tarzan films may have been the best produced and best scripted, but Mike Henry is a terrific Tarzan—especially since, in this film, he is a sophisticated world traveler who only "goes native" when the task at hand calls for it. Very cool!

There are many eye-popping scenes in this film, which make viewing worthwhile. However, the weak link is the script: it is generally superficial and un-involving. The aforementioned Scott films crackled thanks to finely tuned characters whose interactions and circumstances drew us in. In "Valley of Gold," neither Tarzan nor the supporting cast ever get a chance to say enough to make the viewer feel personally engaged.

Nevertheless, it's a fine looking film and refreshing to see people with combed hair and clothes that fit...among other delights.
3 people found this helpful

Wes Saylors Jr.Reviewed in the United States on February 24, 2011
4.0 out of 5 stars
Tarzan ... 007!
Verified purchase
Boy is this a movie. We are first introdued to Tarzan (the ape man) as he steps off a modern, 60s-era jet plane, suitcase in hand and tailored suit clinging to his Tarzan-y body. A man dressed as a chauffeur approaches him: "Are you the one they call Tarzan?" "Yes, I am," replies the one they call Tarzan. And we're off. -- This movie, one of three starring Mike Henry, tries (and mostly succeeds) in marrying the popular James Bond movies with the Tarzan world. In this Tarzan, the Lord of the Jungle sips martinis and adjusts his tie and accepts rides from strangers. But when the Cheetah pooh hits the fan, he dons his loin cloth, grabs the biggest knife available and tracks villains in the jungle, using only his keen Tarzan senses. Is it fun? Oh, yeah. Is it silly? Oh, yeah.--This curiosity is actually a very fun ride. Tarzan ends up in a vast city of gold, helping the natives there thwart bad guys who would have the city for themselves. -- Mike Henry makes a suitably James Bond-looking Tarzan, and the opening credits along (which recall Dr No and Goldfinger) are almost (but not quite) worth the price of admission alone. To say they don't make them like this anymore is an understatement. I don't think they ever made them like this, except this one time. It's as fun as any Tarzan-James Bond hybrid can be. And if you really want to know what's worth the price of admission: When Tarzan takes out a would-be assassain with a huge mock-up of a bottle of Coca Cola. Now THAT'S worth the price of admission.
8 people found this helpful

Russell SReviewed in the United States on November 13, 2017
4.0 out of 5 stars
I was entertained and that was all I expected.
Verified purchase
So from 1965, please keep that in mind, we have a different (at the time) concept of Tarzan. This is a thinking Tarzan and not just muscle. This Tarzan appears to travel to where the trouble is, here he travels to South America. He wears a suit and he considers the problem before acting. Lets understand there is not a ton of Best Actor or a single Best Actress award that will be given out for this. Mike Henry is the Ape man in this one and even though his acting skills and not great, he does a fine job. nancy Kovak is the gal of the piece and well, she was always and terrible actress. This is an okay movie for a chilly winter day when you have to stay in. Keep in mind, 1965....Tarzan....it is what it was.

Cliente AmazonReviewed in the United States on July 5, 2021
5.0 out of 5 stars
El moderno Tarzan.
Verified purchase
A modern version of Tarzan. Very dynamic and entertaining. Excellent color image quality.
I am satisfied with this DVD.

King ReviewerReviewed in the United States on March 3, 2015
3.0 out of 5 stars
One of the few better renditions of the True Tarzan
Verified purchase
One of the BESt looking Tarzan's in film. One of the BEST portrayed Tarzan movies.

Because Tarzan in the books used guns and had an uncanny sense of smell. Tarzan hung out with his pet lion, Jad-bal-ja, along with Manu the monkey. Tarzan spoke eloquently in several languages. Tarzan dressed to the 9's at times, but then reverted back to the savage.

At least in this book, which starts out much like a 007 movie, does ALL of what we mentioned the Burroughs Tarzan does in the books.

At LEAST the producers and writer and director utilized those aspects. We wished it had today's much better fighting sequences.
2 people found this helpful
See all reviews
Back to top
Get to Know Us
Make Money with Us
Amazon Payment Products
Let Us Help You
EnglishChoose a language for shopping. United StatesChoose a country/region for shopping.
© 1996-2022, Amazon.com, Inc. or its affiliates