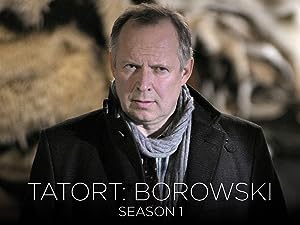 (10)2007TV-14
Detective Klaus Borowski solves crimes in the port city of Kiel with a unique mix of intuition and social awkwardness.

Pastor VReviewed in the United States on February 4, 2017
5.0 out of 5 starsA great guided tour of Kiel with Inspector B.
Verified purchase
One of my faves. Another armchair visit to Germany! I learned that license plates in Kiel all start with KI. After all, if you're going to be a good eyewitness, you've got to notice these things! Plots and characters are intriguing and views into local life and customs keep me watching.
5 people found this helpful
Report abuse

prisrobReviewed in the United States on August 5, 2018
5.0 out of 5 starsCrime Scene
As an aficionado of Mystery/Police procedural, I have seen almost every one, I thought. Then Amazon started offering Amazon Prime TV channels for a monthly fee. One of my favorites is MHz, This Network has international mysteries, dramas & comedies. It is chock full of mysteries/Police procedurally, and my new favorite is Tatort Borowski.

Tatort means Crime Scene, and that is where this show starts and ends. It is a 90 minute show, and there are 10 in each year. Borowski is an investigator for the Kiel, Germany. This is a review of year one. First of all, this series has been ongoing since 1970, with new stars joining now and then. This series stars Axel Milberg as Klaus Borowski. He is a gruff, no nonsense man who follows the book. He has a side kick, and my favorite is Dr. Frida Jung, played by Maren Eggert, a psychotherapist.

Borowski is a lone wolf who works for KK7 in Kiel. Before that he had worked in Hanover, but moved to Schleswig-Holstein after his wife had left him. He is driving an old VW Passat B2 wagon. This car is always breaking down, but he loves the old thing. He has a daughter, and their loving relationship is evident, but he is so busy with his job, he rarely has time for her.

Series one concentrates on some amazing mysteries, and Borowski is up to the job. He has a supervisor who likes and respects him, and has great faith in his abilities. Borowski is very intelligent and intuitive, and solves every crime.

L. GaabReviewed in the United States on February 9, 2018
5.0 out of 5 starsAxel Milberg, who portrays Borowski, is a wonderful
Absolutely top notch story writing, acting, with nice understatement and atmospheres. Top of the list for crime thrillers,
Axel Milberg, who portrays Borowski, is a wonderful actor; charm without chewing the scenery, wide range of mood
impeccably expressed in nonverbal manners. He creates a mysterious, yet honest persona. Wonderful to watch
in the strong storied episodes of both seasons and a third one coming soon to Mhz (2018)!
3 people found this helpful
Report abuse

UnwitReviewed in the United States on December 13, 2020
5.0 out of 5 starsBest tv ever made
The writing is smart and the acting is amazing. Love these.
2 people found this helpful
Report abuse

ShirleyReviewed in the United States on December 5, 2018
5.0 out of 5 starsBinge watching alert
I like the twists and turns of the plots. I like the characters and the German culture.
Report abuse
See all reviews
Back to top
Get to Know Us
Make Money with Us
Amazon Payment Products
Let Us Help You
EnglishChoose a language for shopping. United StatesChoose a country/region for shopping.
© 1996-2021, Amazon.com, Inc. or its affiliates