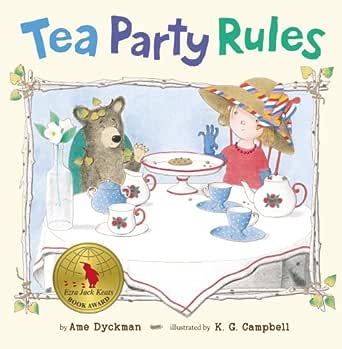 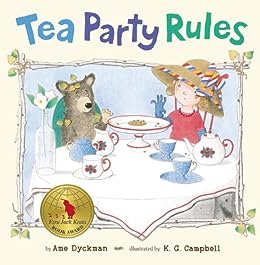 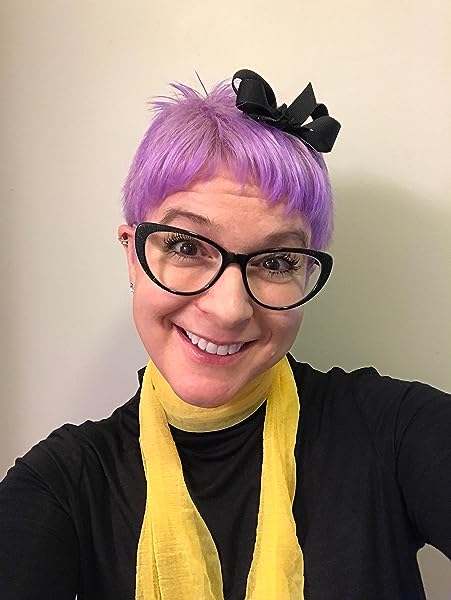 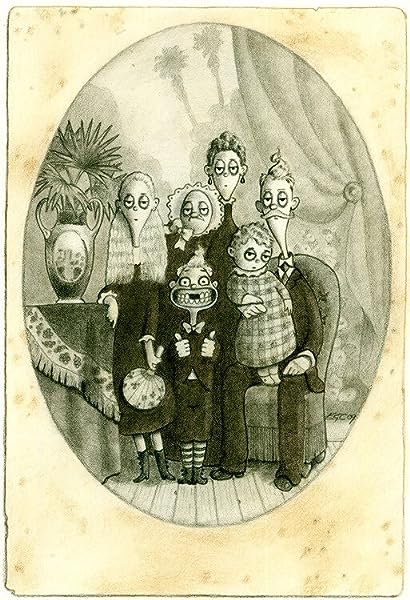 *Starred Review* Ooh, how frustrating. A young bear cub stumbles upon a little girl’s tea party and really, really just wants a cookie, but tea party rules get in the way. The cub, who, unbeknownst to the girl, has knocked her stuffed bear off a chair and taken his identity, gets carted away as soon as the girl peers closely at him. “You’re too grubby,” she says. Cub does not want a bath. However, he is groomed and then put in a dress and bonnet (“Tea Party Rule: you must be neat”). Soon Cub is seated at the table, and it’s finally cookie time, but the rule to “eat daintily” is out the window. (He has his dignity, after all.) The tables are turned, perfectly so, when the little girl changes the game, and therefore the rules. Dyckman (Boy and Bot, 2012) and Campbell (Flora and Ulysses, 2013) are a winning pair, using their comedic chops to pace the story beautifully. Seeing Cub masquerading as stuffed, with feet sticking stiffly out and eyeballs wide, is laugh-out-loud funny. Campbell’s soft sepia-marker-and-colored-pencil illustrations appear on creamy backgrounds, alternating humorous spots and detailed full-page spreads; the depictions of an unhappy bear ensure little ones are in on the joke. This battle of wills between two charmers hits just the right note. Preschool-Grade 3. --Ann Kelley --This text refers to the hardcover edition.

Ame Dyckman writes picture books, hula hoops, and puts coins in people's parking meters. She lives in New Jersey with her family and pets: black cats, hermit crabs, fish, and a demanding-but-adorable squirrel named Willie. She is the author of Boy and Bot, about which The New York Times wrote, "It's simply impossible to imagine . . . not wanting to be friends with this book," as well as Tea Party Rules, winner of the Ezra Jack Keats New Writer Award.  Follow Ame on Twitter @AmeDyckman. --This text refers to the hardcover edition.

* "Dyckman’s (Boy and Bot) and Campbell’s (Flora and Ulysses) story is like a pretty petit four with an unexpectedly zingy filling."--Publishers Weekly, starred review

* "Dyckman (Boy and Bot, 2012) and Campbell (Flora and Ulysses, 2013) are a winning pair, using their comedic chops to pace the story beautifully. . . . This battle of wills between two charmers hits just the right note."--Booklist, starred review,

4.7 out of 5 stars
4.7 out of 5
142 global ratings
How are ratings calculated?
To calculate the overall star rating and percentage breakdown by star, we don’t use a simple average. Instead, our system considers things like how recent a review is and if the reviewer bought the item on Amazon. It also analyzes reviews to verify trustworthiness.
Top reviews

Chris P
5.0 out of 5 stars Loved this book
Reviewed in the United States on September 27, 2020
Verified Purchase
This was an adorable, fun book that I found charming as an adult, and my kids wanted to read over and over. The little girl in the story is so much like my girls, who are very serious about tea time rules! The little bear is hilarious, and the illustrations are wonderful. A highly recommended read for kids.
Read more
3 people found this helpful
Helpful
Report abuse

J.C.Phillipps
5.0 out of 5 stars Rules to Live By
Reviewed in the United States on March 21, 2014
Verified Purchase
This book is super cute! It's about a bear in the woods who smells delicious cookies and stumbles upon a small tea party outside a house. Just when he's about to go for the cookies, a little girl comes outside and the bear has to pretend to be a stuffed animal guest and suffer all of the girl's tea party rules before he's able to get a cookie.

If you have a princess at home, she will love the tea party and the dress-up aspects of the story. If you have a child that is more "bear"ish, they will empathize with the bear and his desire to chow down.

The gorgeous illustrations and soft and gentle, yet hysterical. (Love the cat!)

Pour yourself some milk, get a plate of cookies, and enjoy TEA PARTY RULES.

working girl
4.0 out of 5 stars Cute book for little kids
Reviewed in the United States on April 17, 2019
Verified Purchase
One of the few "tea party" books for little kids I could find. The story on this one is engaging, and a good starting point for a whole host of ideas from the needs of wild animals to the fun of planning a tea party with pretend toys.
Read more
3 people found this helpful
Helpful
Report abuse

ELIZA B.
5.0 out of 5 stars Sweet Story
Reviewed in the United States on December 6, 2020
Verified Purchase
Pretty illustrations and a captivating sweet story for a 5 yr old girl.
Read more
Helpful
Report abuse

Lucy P
4.0 out of 5 stars Fun book for Toddlers
Reviewed in the United States on June 22, 2019
Verified Purchase
My daughter brought this to school for her British day along with all the trimmings for a tea party. All the children enjoyed it
Read more
Helpful
Report abuse

Amazon Customer
5.0 out of 5 stars Great gift idea!
Reviewed in the United States on November 28, 2019
Verified Purchase
This is THE cutest book! My friend and her daughter loved it. I gave her a tea set along with book. Best gift ever.
Read more
Helpful
Report abuse

maryk
4.0 out of 5 stars Cute little cookie finding bear.
Reviewed in the United States on April 15, 2019
Verified Purchase
Both story and illustrations were well thought from beginning to end. Little bear walking thru the woods was very pretty.
Read more
Helpful
Report abuse
See all reviews

Jenn
5.0 out of 5 stars A delightful book!
Reviewed in Canada on April 29, 2016
Verified Purchase
I was looking for a book to introduce my daughter to what a tea party is all about, many other books that I bought and looked into fell short in some way or the other (illustrations, story line), but this one was just perfect. A delightful book from beginning to end!
Read more
One person found this helpful
Report abuse
See all reviews