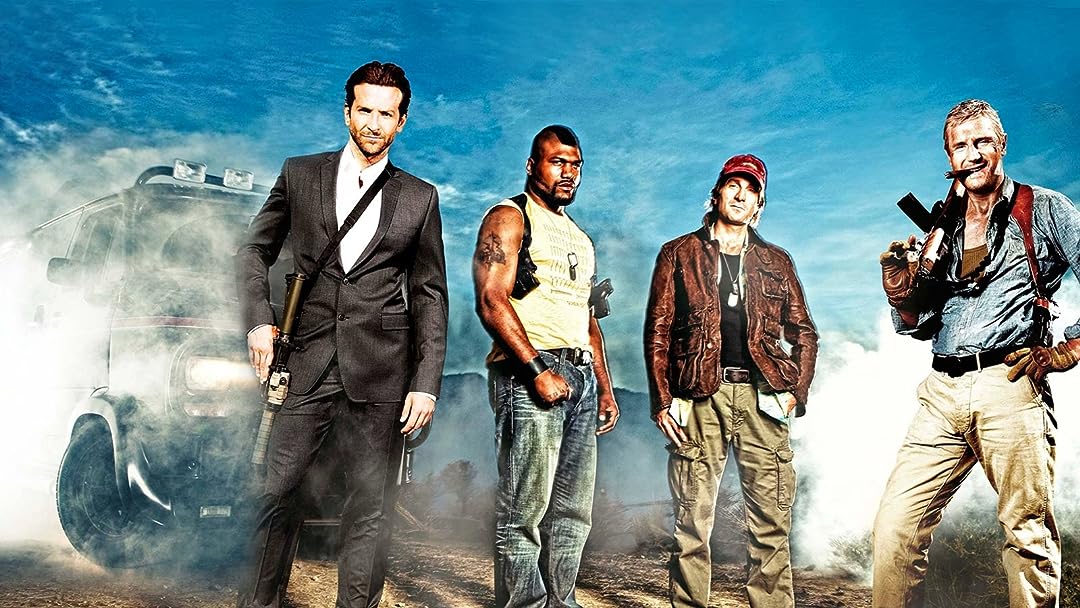 (5,712)
6.71 h 58 min2010X-RayPG-13
Convicted by a military court for a crime they didn't commit, a daring team of former Special Forces soldiers must utilize their unique talents to break out of prison and tackle their toughest mission yet.

Thoughtful ConsumerReviewed in the United States on March 21, 2021
1.0 out of 5 stars
Not Worth Your Time - DO NOT WATCH
Verified purchase
I loved the A-team on TV. It was funny, it had guns (but no one ever got killed), and they had likable characters. This movie by Joe Carnahan, is an abomination. I hope George Peppard was dead before this movie came out.

First, while there are many fine actors in this movie, their talents are wasted. They play characters you hope get killed, and the bad guys win. These are very very unlikable people.

Second, this movie wants to be an action-comedy. What it is a three day warmed over barf from a microwave. There is not many funny parts to this show, and all the gags are signaled well ahead of it happening. Might was well re-watch the Fast and the Furious for the 10th time. That's how telegraphed this show is.

I would avoid this movie if at all possible. If you do want to watch the A-team, find a couple of episodes of the old TV show. That was entertaining.

BabsReviewed in the United States on April 6, 2021
5.0 out of 5 stars
SORRY NEGATIVE REVIEWERS BUT THIS MOVIE ROCKS!!!!
Verified purchase
I get it that many reviewers have negative comments about this movie, but I LOVED IT SO MUCH!!! It was over the top in spots with the effects but the acting was great and the HUMOR WAS OFF THE CHARTS! So HILARIOUS!!! So if you want a comical adventure and don't take it too seriously, as some did, you'll enjoy the heck out of this movie! I loved all the actors in this, the plot twists, and mostly the funny/dry writing.
12 people found this helpful

W5HNReviewed in the United States on March 16, 2021
5.0 out of 5 stars
I have always given this show a top 10 point rating!!!!! When it was on TV
Verified purchase
The movie though??? Out of this world awesome!!! What is not to love about four falsely accused GI's running around America playing Robin Hood and righting every wrong they can? My only regret is THAT THEY DO NOT HAVE A FEMALE VERSION (LETS SAY IT'S CALLED ) THE VZ TEAM!!!! Why no one has written a female version of this TV Show/Movie is beyond me!!!! There are GI JANES that are every bit as rough and crude as these guys can be but add to that feminine moxie? Well know, I am sure that many more military GI's would watch it as well as every women who loves seeing wrongs made right. But ya got to do it right!!! With panache and style is the only way to go!!!That could be the second movie with Liam Neeson and crew as military advisors. And then the 3rd movie brings them together to save the old U S of A!!!
7 people found this helpful

joel wingReviewed in the United States on March 7, 2021
3.0 out of 5 stars
Was a lot of fun and didn't take itself seriously
Verified purchase
This was a good take on the 80s TV show. It captured the planning and action of the original plus didn’t take itself that seriously which made it better than usual. I especially liked casting Sharito Copley as Howling Mad Murdock. I’ve always enjoyed his acting and his character was certifiably crazy which added to the fun of the movie. He also steals a lot of the scenes that he’s in. All together that’s what made this better than your usual action flick.
3 people found this helpful

NoceRoseReviewed in the United States on April 28, 2017
5.0 out of 5 stars
amazon movie service ponzi as hell
Verified purchase
good movie, full of action, and yet after a few times seeing-- its one of those movies you can wait about a year before you want t o see it again... I think there was another charge for this one-- I pay amazon for movies that are box office hits,.. only to find out that the movies that are included in the service without another form of payment are not box office hits........ and they know what we like-- making us pay again and again or using our interests to format service re-routing us to another subscription of service to pay for something we already payed for.... hey but that's sneaky. Kahootz to making money in the most Ponzi of fashion... Cheers amazon- you're only pissing people off who have the ability to update their method of payment status and make sure the cards have little no balance. wink wink
16 people found this helpful

ETNReviewed in the United States on November 23, 2021
2.0 out of 5 stars
"D" effort for the A team movie
Verified purchase
This movie has so much nonsense going on that it would take all day for me to describe it.

For starters, The A-Team van is featured only once and is immediately destroyed.

We see a sports car being chased and think "ah that must be face man" but no, it's BA - who doesn't have any gold chains or famous hairstyle.

We see BA get shot but doesn't seem to be really hurt. Really?

There are a number of ridiculous special effects scenes like the flying tank or the giant pile of shipping containers. They are so stupid that only a 5 year old could be entertained.

The end of the movie is a complete mess with characters appearing all over the place for no reason.

On the plus side, there are some funny sequences where we learn how BA got scared of flying. Also Liam Neeson did a great job trying to save this awful movie.

I hope the next A-team movie is able to do better.

Obi WanReviewed in the United States on July 9, 2014
5.0 out of 5 stars
If you have a problem. If no one else can help. And if you can find them...maybe you can hire...The A Team
Verified purchase
If you liked the TV show in the 80's, you will like A Team movie! It's as simple as that.

The movie captures all the fun of the TV show without sacrificing the characters to the dreaded 'modernization' that you get with most movies made from 80's TV shows.

They do update the plot for the modern ear. Instead of the A Team being Vietnam vets wrongly accused of robbing a Vietnamese bank, they are Iraqi war vets accused of stealing US money printing plates stolen by the Iraqis. The other update is that they hit their targets when they shoot (in the TV show thousands of rounds would be fired but no one would ever get hit)

All in all you will love this remake of a classic show.

Carl D. BradleyReviewed in the United States on March 11, 2021
5.0 out of 5 stars
Just magical silly action fun and great homage to the series!
Verified purchase
I love every ounce of this film. Pure awesome. Action is terrific, every joke lands, and the plot is more than enough to carry the story end to end. Casting was spectacular across the board.
The only complaint I have isn't with the movie at all. It's with the editors in charge of trimming for AMX Prime use. Snipped at least 4 scenes that actually mattered to the story and with NO excuse, cut out a fantastic 20 seconds of cameo by the great origin of Face on screen, Mr. Dirk Benedict. Really wish they'd add that back in.
In general - loved it.
One person found this helpful
See all reviews
Back to top
Get to Know Us
Make Money with Us
Amazon Payment Products
Let Us Help You
EnglishChoose a language for shopping. United StatesChoose a country/region for shopping.
© 1996-2021, Amazon.com, Inc. or its affiliates