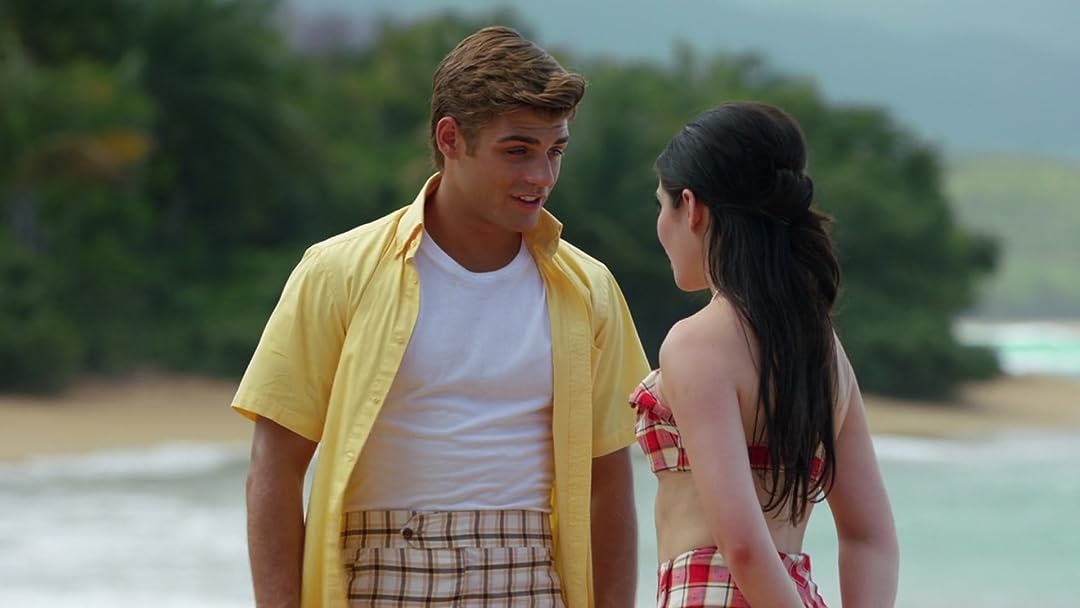 Ronald allenReviewed in the United States on May 15, 2021
4.0 out of 5 stars
Disney's teen beach DVD
Verified purchase
Megan from Maryland I recommend this Disney Teen Beach original musical DVD I give it 5 stars in two thumbs up if you like musicals you like Disney and you like beach movies this movie is for you I actually own this one and the second one it's fun funny and you can sing along to the song and its family friendly it's great as a gift or for yourself it's the best I would recommend it and review it again and give it the same review and I would buy it again I guarantee it in the people that are so cute and the guys are hot it's a blast so much fun to watch time and time again
One person found this helpful

Amanda DReviewed in the United States on July 19, 2016
5.0 out of 5 stars
A GREAT movie for kids and adults alike! Especially if you can appreciate the songs and 1960s beach movie parody!
Verified purchase
I LOVE the Teen Beach Movie! I'm an adult female and I think that this movie has some amazing lessons in it for childeren and adults alike. Not only does it teach children that girls can do anything boys can do, but it does so through some very catchy songs and dance that parody the cheesy beach movies of Frankie Avalon and Annette Funicello of the 1960s, while also showing how they had some sexist tendancies because of the time, and correcting those flaws and showing that it's important to stand up for what's right and not just give in to peer pressure.
This movie also has a heartwarming message about being yourself and following your heart. It's message is that you shouldn't simply do things that people tell you because they say you should do it, but you should do what makes you happy and never try to be something that you're not.
All in all, I love this movie, and my 2 and 4 year old cousins absolutely LOVE this movie. I hope that children everywhere can learn something from this powerful movie hidden behind catchy songs and 1960s parody comedy.

FillisReviewed in the United States on July 23, 2014
3.0 out of 5 stars
It's Not Annette and Frankie, but its sweet.
Verified purchase
This movie is sweet as sugar. It doesn't have the great dance routines that High School Musical had, in fact they are at times a bit lame, and the main characters do not have the same draw. You don't feel invested in them; also end, up-in-the air. But, there is something about this Movie that draws you back to the old beach movies(which I think was the direction the director wanted to go). It does that(though you'd actually have to get the original beach movies to enjoy the qualities of them) . The storyline and some of the characters are cartoonish. But, if you're looking for a clean, light story; this is the movie to see. Get it at the lowest price you can though. It's not worth a lot of money, but its enjoyable and it is the type of movie you might want to watch again. The messages are also good: Acceptance, Look for YOUR path, not someone elses, etc...
3 people found this helpful

Steve JohnsonReviewed in the United States on March 21, 2017
5.0 out of 5 stars
Entertaining, Fun movie with a great cast
Verified purchase
I grew up watching all the beach movies with Frankie A. and Annett F. I have all these movies now on DVD to watch whenever. I was not sure at first about this Teen Beach Movie, because I really didn't know any of the actors and thought it might be a rip off or making fun of the older beach movies. I was very pleasantly surprised and enjoyed the movie, the singing, dancing and the cast. If you enjoy the older beach movies, you might enjoy seeing this movie and it brings back memories of the older beach goers and their antics. I am sure they will have more of these Teen Beach Movies as they did with the older beach movies,
2 people found this helpful

Kyle RenickReviewed in the United States on August 30, 2013
5.0 out of 5 stars
Disney Channel Hit of Summer 2013
Verified purchase
"Teen Beach Movie" is a brilliant deconstruction of 1960s teenage titles such as "Beach Blanket Bingo" and "Ride the Wild Surf" with the influence of the stage and screen tributes of "Grease" and the time travel antics of "Back to the Future." It is also the second highest ranking cable television movie ever, right behind Disney's own "High School Musical 2." The trumpeting of the huge number of viewers in the demographic of children age 2 to 11 ignores the fact of how pleasurable the movie is for adults as well, especially those engaged by its self-referential enthusiasm and its film-within-a-film structure, enlivened by a soupçon of post-feminist self actualization. This movie truly is fun for the entire family, and reveals additional charms in repeat viewings. The choreography, cinematography, editing and performing of musical numbers such as "Surf's Up" and "Cruisin' for a Bruisin'" and "Like Me" are infectiously entertaining. Particularly noteworthy are the charm and charisma of lead performer Ross Lynch as Brady, a regular on the Disney Channel's "Austin & Ally" show, who knows all about those old movie musicals such as "Wet Side Story" and figures out how to get back to the future with girlfriend Mack. To fellow surfer Tanner, Brady says: "So, all you guys do around here is hang, eat and surf?" and Tanner replies, "Is there any other way?" Brady agrees: "Sounds perfect!" Totally!
3 people found this helpful

beatlegeekReviewed in the United States on May 24, 2015
5.0 out of 5 stars
Surf's Up!
Verified purchase
This was a really really enjoyable film :) I grew up watching those old surf/beach movies from the 60s when I was a kid so watching this was definitely a lot nostalgia. The plot was interesting and weird, but it works. I actually wish the movie had been a bit longer but I understand they need to keep it at 90 minutes. The only weak point was the whole plot with the weather machine because they kind of glossed over the villains and the climatic scene just happened out of nowhere without much exposition. The music and dance numbers were pretty cool, though. Great for kids and non cynical adults to watch. Can't wait for Teen Beach 2!
2 people found this helpful

capnbReviewed in the United States on July 6, 2021
1.0 out of 5 stars
impossible to contact amazon.
Verified purchase
Movie was blurry half way through. Its impossible to contact amazon. They are good at taking your money but forget about getting in touch with them. seriously thinking of cancelling prime. Prime was supposed to have FREE movies but Ive yet to find any new ones that are free, event he old old ones are costly.

Janice T. TempleReviewed in the United States on August 22, 2013
5.0 out of 5 stars
Cowabunga!
Verified purchase
This movie is a fun in the sun, exciting, full of surprises and budding romance. Life is a beach for surfers Brady and McKenzie. But a rogue wave takes them to the 60s beach party, "Wet Side Story." A rivalry between bikers and surfers begins. But in a sea of surfing, singing and dancing, Brady and Mack accidentally change the story line. The film's dreamy hero and heroine fall for them instead of each other. You have to see this movie to see if our heroes can get the plot back on track or if they will be trapped there forever. This Disney Channel movie is funny and has high energy musical numbers. Teen Beach Movie makes Summer last all year. I recommend it to preteen and teen child.
See all reviews
Back to top
Get to Know Us
Make Money with Us
Amazon Payment Products
Let Us Help You
EnglishChoose a language for shopping. United StatesChoose a country/region for shopping.
© 1996-2022, Amazon.com, Inc. or its affiliates