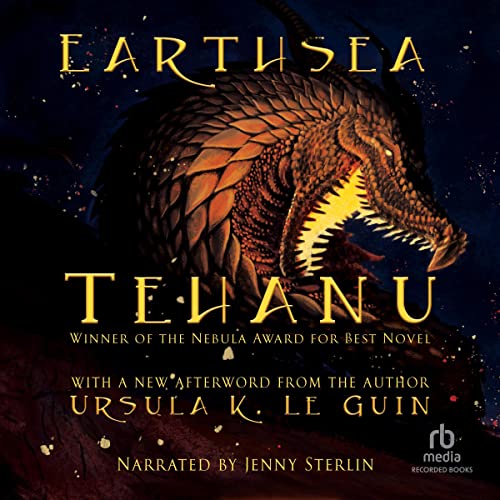 Years before, they had escaped together from the sinister Tombs of Atuan - she an isolated young priestess, he a powerful wizard. Now she is a farmer's widow, having chosen for herself the simple pleasures of an ordinary life. And he is a broken old man, mourning the powers lost to him not by choice.

A lifetime ago they helped each other at a time of darkness and danger. Now they must join forces again to help another - the physically and emotionally scarred child whose own destiny remains to be revealed.

2 free audiobooks are waiting
Learn more about membership
List Price: $24.49
You Save: $3.54 (14%)
By completing your purchase, you agree to Audible’s Conditions Of Use
Sold and delivered by Audible, an Amazon company
Share

Amazon Customer
5.0 out of 5 stars Great new perspective on Earthsea
Reviewed in the United States 🇺🇸 on August 29, 2022
Verified Purchase
The story brings a new context to the world and shows the change that is occurring to magic in a personal way. Really represents the dawn of a new age to come and leaves hints of that future.
Read more
Helpful
Report abuse

Elmyr
5.0 out of 5 stars Paths of the powerless (some spoilers if you have not read through book 3)
Reviewed in the United States 🇺🇸 on February 17, 2019
Verified Purchase
I read the Earthsea trilogy when I was a teen in the 90's. I heard rumors then of a 4th book, Tehanu, and wanted badly to read it, but never saw it in stores. The internet didn't exist yet, so I did not pursue it further, believing I would read it someday. I finished reading it today, as a woman in my mid-30's. It's a book I am glad I didn't try to grasp when I was younger. Like Le Guin mentions in the afterword, she said she needed nearly 18 years to gain the experience to write the book, and I think I needed my 20 years to read it and be ready to hear what it had to say. I understand the book has been criticized by some for being overly 'feminist', and she addressed that in the afterword deftly, and without shrinking or apologizing for what she wrote, and I love her all the more for it.

I don't want to spoil anything, but I feel the heart of this book is in Tenar's character development through maiden and then mother, and her relationship to crones as she looks forward to the next stage of her life. Her relationships to power are explored--both the power she possesses innately, and the powers that have influenced her externally. She cares for a girl who has been disfigured and disused beyond the point of healing, such that only a transformation would allow her to thrive. Ged spent the last of his power at the end of 'The Farthest Shore', and must find a renewed purpose to continue living, as his power is no longer the core of his identity, and he is no longer effectual in the ways in which he has been accustomed his whole life. This book explores further the role of death in the life cycle, and the pressures of pain and injustice that push each of these lives deep into the earth, from which they must all burst forth and transform renewed as seedlings must reach for the sunlight.

Reading a high fantasy book with a woman past her flower (invisible as they often are) as the main protagonist has affected me profoundly. I wish desperately that I could still thank Ursula K. Le Guin for what her writing and vision have mean to to my life, but I am too late to catch her before her final departure. I felt as though, reading this, that in the telling she had whispered a piece of her true name in my ear, and left behind a home in Earthsea, and her books and sage insight, and the cycle continues unbroken.
Read more
34 people found this helpful
Helpful
Report abuse

Patrick Shepherd
4.0 out of 5 stars Ladies to the Forefront
Reviewed in the United States 🇺🇸 on June 24, 2002
Verified Purchase
As book four in the Earthsea saga, this book is a radical departure from the tone and feel of the first three. There is very little magic in this book; rather what we have is a very fine delineation of everyday living in a world where things do not always go right, where the rape, burning, and near murder of a child, while not an ordinary occurrence, is part of the way things are.
Tenar, who we first met in book two, The Tombs of Atuan, is the point of view character of this book, a now middle-aged woman who has settled down to an ordinary life as a farmer’s wife, whose days have become a matter of routine, where magic, mages, and kings are merely fond memories. But her husband is now dead, she has ‘adopted’ the poor abused child Therra mentioned above, and change comes in the form of a message that Origon, Ged’s teacher and master mage of Gont island, is dying. From here we follow Tenar’s attempts to forge just what her place in life is, accompanied by a now magic-less Ged, in terms of both everyday living and the place of women within the power structure of mages and kings.
There is a very definite turning in this book towards feminist themes, at times almost stridently so, in sharp contrast to the male-dominated earlier books. Tenar comes to question the right of any man to order her life, while at the same time recognizing that there is an incompleteness to her life without a complementary man to live it with. Issues of home, hearth, and children’s education (embodied by the physically and emotionally scarred Therra) are of prime importance here. All this makes for a very gritty, real-world feel to this book, certainly far away from fairy-tale land. Those who loved the earlier books may find this too much of a change, but I found that for myself, this book makes a great counter-point to those books, providing the whole with a balance that is perfectly in key with the general philosophy of Earthsea, that all things must be kept in balance. At the same time, this is not a book for younger children, as the themes and events are too dark, violent, and rife with heavy emotional freighting. Older teens can probably derive much from this book, with Tenar as a strong female role model and coping with loss and tragedy are so well presented.
Le Guin’s prose style is still the simple, minimalist structure that we have grown so used to over the years, a fine vehicle for presenting difficult concepts in easily digestible thought flavors. Things are never over-described, but rather left with a certain amount of incompleteness that allows the reader to add his own mental picture.
Very different from the first three books, but with its own power to capture your imagination, and with much to say about the everyday world where bad things must be met, handled, and then continue on with your life.
Read more
12 people found this helpful
Helpful
Report abuse
See all reviews

Denis Bridoux
4.0 out of 5 stars A great series and a classic
Reviewed in the United Kingdom 🇬🇧 on February 6, 2018
Verified Purchase
Good to get the whole series in Kindle format.
However, the missing star is due to the fact that the map at the beginning of each volume are VERY POORLY reproduced.
Their low definition makes it virtually impossible to decipher the names of the islands.
In addition, the missing middle map section deletes some of the islands, or parts of them, which makes it all but unusable.
A reader who doesn't have a hard copy to refer to, or who wouldn't make the effort to download a high quality map from the author's website, would be hard put to follow the travel of the protagonists.
The map sections should be resampled as a matter of urgency, as they are essential to the understanding of the story.
Read more

4.0 out of 5 stars A great series and a classic
Reviewed in the United Kingdom 🇬🇧 on February 6, 2018
Good to get the whole series in Kindle format.
However, the missing star is due to the fact that the map at the beginning of each volume are VERY POORLY reproduced.
Their low definition makes it virtually impossible to decipher the names of the islands.
In addition, the missing middle map section deletes some of the islands, or parts of them, which makes it all but unusable.
A reader who doesn't have a hard copy to refer to, or who wouldn't make the effort to download a high quality map from the author's website, would be hard put to follow the travel of the protagonists.
The map sections should be resampled as a matter of urgency, as they are essential to the understanding of the story.

mistersaxon
5.0 out of 5 stars Still a classic - and as classic as they come, too
Reviewed in the United Kingdom 🇬🇧 on May 12, 2020
Verified Purchase
This being the 4th volume of the Tales of Earthsea, there is little point in my saying much of the adventures of Ged, Tenar, dragons or of the King - but they are all there and the book winds them together and ties off the knot with precision and skill. Don’t fail to read this if you’ve read the other books, and if you’ve only read A Wizard Of Earthsea then go read the others and rest assured that this book is waiting for you at the end of it all, and you can, in the end, live there :)
Read more
Report abuse

Max Speed
5.0 out of 5 stars An enjoyable conclusion to the Earthsea trilogy
Reviewed in the United Kingdom 🇬🇧 on April 20, 2020
Verified Purchase
Having greatly enjoyed the original trilogy when it was first published, I was delighted to discover this fourth book - a real page turner and a fitting addition to the series. It also resolves the question I had about the “Tombs of Athuan”: who is Tenar really? We finally learn a lot more about her character and life after the second novel. Highly recommended, if you’ve read the previous books.
Read more
Report abuse

Kate
4.0 out of 5 stars Appealing
Reviewed in the United Kingdom 🇬🇧 on May 5, 2021
Verified Purchase
Like many other reviewers I don't find this as appealing as the initial trilogy. However it is very evocatively written , is warm in tone and had a good twist at the end. I have ordered the 5th book too.
Read more
Report abuse

SKJ
5.0 out of 5 stars Brilliant
Reviewed in the United Kingdom 🇬🇧 on February 26, 2021
Verified Purchase
Another fantastic addition to the series. What a marvellous writer indeed. And the rarity of a book that does not shy away from the destruction humans can cause and the consequences but without too much horror. A very good teade.
Read more
Report abuse
See all reviews