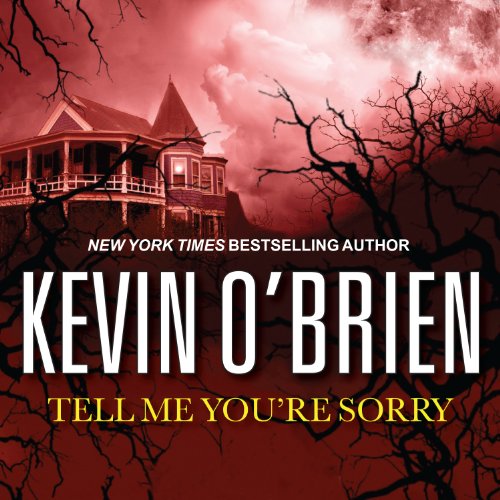 Tell Me You're Sorry

A family is wiped out after a burglary gone wrong. An executive accused of embezzling kills himself and his loved ones. A house fire claims the lives of all its inhabitants. Separate incidents with two common threads - a first wife who took her own life, and a secret the victims took to their graves.

Stephanie Coburn has barely recovered from her sister's mysterious suicide before her brother-in-law and his new wife are murdered, her face disfigured beyond recognition. Stephanie never met the bride, has never even seen a clear photograph. But she knew her sister, and she knows something is desperately wrong. The police won't listen. Her only ally is another victim's son. Step by step, they're uncovering a trail of brutal vengeance and a killer who will never relent-and whose forgiveness can only be earned in death.

Special invitation from Audible!
Learn more about Membership
List Price: $31.49
You Save: $4.54 (14%)
By completing your purchase, you agree to Audible’s Conditions Of Use
Sold and delivered by Audible, an Amazon company
Share

4.7 out of 5 stars
4.7 out of 5
317 global ratings
How are ratings calculated?
To calculate the overall star rating and percentage breakdown by star, we don’t use a simple average. Instead, our system considers things like how recent a review is and if the reviewer bought the item on Amazon. It also analyzes reviews to verify trustworthiness.
Top reviews

D. R. Johnson
4.0 out of 5 stars Four stars - A good read
Reviewed in the United States on February 2, 2020
Verified Purchase
This is the first novel I’ve read by this author, and I don’t read a lot of this genre: psychological thrillers. That said, it was still an enjoyable read and kept my attention. The characters were interesting, and the plot was very complex, which is both a positive and a negative. I found it very difficult to keep up with all of the dates and locations in the first dozen chapters. Also, I don’t know if it was a kindle formatting issue, but what should have been new chapters, for clarity sake, would appear as just the next paragraph in an ongoing chapter. So at times, it was very confusing as to where people were physically and even sometimes hard to tell who was speaking the dialogue. On many occasions, I had to go back and reread portions to understand what was going on currently. Whether it is a formatting issue or the result of very poor editing, this problem needs to be resolved through additional editing and an updated version released. Correcting this problem might be the difference between someone, who chose this as their first novel to read by this author, reading a second novel by this author. Or not!
Read more
Helpful
Report abuse

Paulette p
5.0 out of 5 stars This book would be a great movie!!!!!!!!
Reviewed in the United States on October 29, 2020
Verified Purchase
I have read quite a few books by Kevin O'Brien , this plot was so great. Hard to believe one night on the beach, drinking and having fun, could turn into a nightmare, for four of the men, later in life. Took awhile to figure out who was doing the killing, but it was so worth it. Just when you think the book was great the ending really came out of left field, did not see this one coming.Do take the time to read this one , you will not be disappointed . This book is so unlike so many others. DO READ THIS ONE!!!!!!!!!!!!!!!!
Read more
Helpful
Report abuse

Kindle Customer
4.0 out of 5 stars Good mystery
Reviewed in the United States on March 22, 2017
Verified Purchase
There is no question that it is a well-written and complex plot line, as opposed to many mysteries which are overly simplified. My only problem (and it really is my own unique quirk) is I don't like stories where the person is struggling to be believed throughout the entire story line and that I figured it out what was going on about a third of the way through and I also got frustrated that the main character didn't make the connection with the obvious clue at the beginning with reference to identities.
I enjoyed his other books a bit more because of this.
Read more
One person found this helpful
Helpful
Report abuse

Dwain Plaster
4.0 out of 5 stars Great book, as always
Reviewed in the United States on August 27, 2019
Verified Purchase
I always enjoy O'Brien's mysteries and this one did not disappoint. Very intricate plot and tied up nicely at the end. One caveat -- the kindle version was a bit hard to read because there was no spacing between scene changes. Very disconcerting in the beginning, but not so bad after I figured that out. The Kindle people need to get their arms around this problem!
Read more
Helpful
Report abuse

Josie
5.0 out of 5 stars On My Gosh!!
Reviewed in the United States on March 10, 2021
Verified Purchase
I literally could not put this down; I read it in one day. It was a lot of going back and forth and trying to keep track of characters, but had me guessing until the very end.You will not want to miss reading this book!!!
Read more
Helpful
Report abuse

Carol Pierson Holding
5.0 out of 5 stars Don't start this book in the sauna...
Reviewed in the United States on September 3, 2014
Verified Purchase
I stopped reading only twice - once to get out of the sauna before I did serious harm to myself, and later to ask my spouse to cancel our dinner reservations. The plot is described above but doesn't do it justice - so many killings and yet every character, victims and killers alike, stays with you. Can't wait for the next one, and this time, I will start when I've got an empty day - and promise my spouse, no sauna!!
Read more
One person found this helpful
Helpful
Report abuse

Blanche Devereaux
5.0 out of 5 stars Could not put it down!
Reviewed in the United States on June 1, 2014
Verified Purchase
Like most of Kevin O'Brien's books this one had me hooked from the beginning. This book keeps you guessing until the end. Why are these killings happening? What is the common thread? There is of course a common thread but trying to figure it out is so entertaining I found myself thinking about the story even when not reading it. If you're a fan of Kevin O'Brien this latest book won't disappoint you. If you don't know him and enjoy a good thriller pick-up this book, you'll become a fan for life.
Read more
One person found this helpful
Helpful
Report abuse

Angela d'Estelle-Roe
5.0 out of 5 stars A page turner
Reviewed in the United Kingdom on August 23, 2018
Verified Purchase
The intrigue is brilliant
Read more
Report abuse

Joyce Hurd
5.0 out of 5 stars Kevin O'Brien is the best!
Reviewed in Canada on October 8, 2016
Verified Purchase
Kevin O'Brien is one of my favorite crime and mystery writers. All his books are awesome. I have read them all and every one is an experience in itself. I would recommend any of this writers books for you to devour.Amazon shipped promptly.
Read more
One person found this helpful
Report abuse

Checomick
5.0 out of 5 stars Scary and good
Reviewed in Canada on October 24, 2014
Verified Purchase
His style of writing keep you on your toes the whole time you are reading, and well past as well. Fabulous author if you like twists and turns throughout the story. The ending is always a surprise.
Read more
2 people found this helpful
Report abuse

Jenifer Mohammed, Author of Resurrecting Cybele
5.0 out of 5 stars Great story!
Reviewed in Canada on April 29, 2014
Verified Purchase
This story had everything necessary to be a great thriller: hidden secrets of the past, dangerous villains, and well-written, likeable heroes. A great story!
Read more
2 people found this helpful
Report abuse
See all reviews
Back to top
Get to Know Us
Make Money with Us
Amazon Payment Products
Let Us Help You
EnglishChoose a language for shopping. United StatesChoose a country/region for shopping.
© 1996-2021, Amazon.com, Inc. or its affiliates