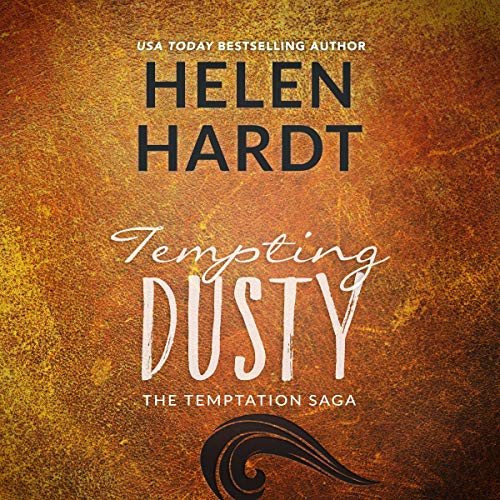 List Price: $41.99
You Save: $18.00 (43%)
By completing your purchase, you agree to Audible’s Conditions Of Use
Sold and delivered by Audible, an Amazon company
Share

4.7 out of 5 stars
4.7 out of 5
806 global ratings
How are ratings calculated?
To calculate the overall star rating and percentage breakdown by star, we don’t use a simple average. Instead, our system considers things like how recent a review is and if the reviewer bought the item on Amazon. It also analyzes reviews to verify trustworthiness.

c33m
5.0 out of 5 stars This book is definitely tempting!
Reviewed in the United States on April 7, 2017
Verified Purchase
If you love an amazing cowboy story, Tempting Dusty will surely satisfy you. This book has a great storyline and I was certainly hooked from the beginning. I definitely loved the characters and the many emotions that this book had evoked.
Read more
11 people found this helpful
Helpful
Report abuse

Fantasydreamalicous blog
5.0 out of 5 stars Cowboys an lovely ladies
Reviewed in the United States on November 8, 2015
Verified Purchase
Let me start by saying I love this book it's two awesome stories in one awesome book. I love cowboys I'm a country girl, some of you might not be but if you read these stories I'm sure you will fall in love with them. Miss. Hardt just brings to life the characters in her book. When I started this book I couldn't put it down. It pulls you in from the start. I laughed, cried, even got mad at times. There is good times an sad times.
I enjoyed volume 1. Ivy League Cowboy
Dusty an Zach
Dusty an Zach grew up together she moved with her family away from Zach an his family. Her mom passed away an later so did her daddy.
Dusty is a bull rider an people call her bull whisper call she talks to bulls.
Zach is a wealthy cowboy rancher.Handsome, sexy all the women who know him wants him. He smart an fun.
Dusty is sweet, beautiful, an has a secret she is afraid to tell Zach.
Dusty an her brother come back yrs later to their home town an enter the rodeo. She is al so a barrel racer an she wants to ride Diablo the bull that the owner is putting half million dollars on if anyone can stay on him for 8 seconds. No one has been able to an Dusty has to find out that the owner is non other than her friend Zach.
He tells her she can't ride him she determined to ride the bull.
Zach falls for Dusty hard an fast. Dusty realizes she has fallen for him to but she can't love him she doesn't know how long she has an she doesn't want to put him thru that.
Zach is hurt that she leaves he's mad an doesn't know what to do. His brother's take it upon themselves to find out what's going on with Dusty they know that they love each other.
Zach shows up at her ranch telling her he loves her an she tells him her secert. She knows it's not only her decision but his to make also. Their love is strong an powerful an they are together thru it all.

Volume 2 Cowboy an a Gentleman
Annie an Dallas, what can I say about these to, they both have been lied to hurt during their marriages. Annie was abused in her marriage over an over she stayed with him till she couldn't take it any longer. He beat her so bad an hurt her. She had him locked up in jail, a restraining order out on him. She moves away from NJ an comes to the little town in Co.to start over with her vet business. She meets Dallas an falls for him in a NY minute.
Dallas has just gone thru a divorce his ex Chelsea got what she wanted from him. He found out that she lied to him he didn't want no part of her anymore,
As soon as he sets eyes on Annie he wants her he falls for her hard.
You want to cry with her, laugh with them both an yes kick him where the sun don't shine.
He just want make the same mistake twice, that's his motto. He tries to get her off his mind but he can't do it. He want listen to her as she tries to explain why she lied bout the pill with her ex husband. He loves her but can't be with her.
She leaves broken hearted goes hone feeling dejected no reason to stay an decides to leave town.
She walks into her house to find her ex husband there, he beats her she doesn't fight back since she has nothing to fight for. Her love wants her but doesn't want her...
His sister in law puts him in his place an admits some of what Annie told her. From all the information he hears he knows she was beat. He tries her phone no answer he knows something is wrong she always answers her phone. He knows he has lost Annie but will do anything to find her an get her back an win her love again.
Not to tell it all but to say Dallas has a lot of making up to do an prove he loves Annie, before he pays the ultimatum price . Love the stories can wait to read her other books in the series. I was given this book for an honest review an it's absolutely worth every star
Read more
19 people found this helpful
Helpful
Report abuse

dsjones
5.0 out of 5 stars TEMPTING DUSTY (Temptation Sagas Book #1) By Helen Hardt
Reviewed in the United States on June 30, 2020
Verified Purchase
TEMPTING DUSTY (Temptation Sagas Book #1) By Helen Hardt
Dusty O’Donovan is a special woman, a bull rider that can also whisper to bulls. Zach McCray is the wealthy rancher that is entering his bull into the rodeo with a huge $500,000 purse as winnings. Dusty wants the money that could help her and her brother keep from losing their ranch if she can stay on the mean bull that cannot be ridden the full time of 8 seconds. Zach is determined to not let Dusty do this and she is determined to try. The sparks are flying between these two. Read to see what happens now! This is another of the addictive stories that Helen Hardt consistently produces. Her work is always well written with solid story lines, great characters, drama, mystery, angst and passionate burning hot chemistry. This is another example of why she is such a talent. Definitely a 5 star read.
Read more
Helpful
Report abuse

Amazon Customer
5.0 out of 5 stars Amazing!!!!
Reviewed in the United States on March 4, 2017
Verified Purchase
I love, love, love reading Helen Hardt books, especially The Temptation Saga series. Once I started reading Tempting Dusty, that's it, I was hooked and can't get enough. Helen Hardt is amazing and her books leave you with a craving and wanting more. I love her series, it's obvious why Hardt is an Award Winning Author. I hope she continues her creative and mind blowing writing because I will keep reading. Her books are worth every bit of the costly purchases.
Read more
5 people found this helpful
Helpful
Report abuse

Donna feibusch
5.0 out of 5 stars An Awesome Book!
Reviewed in the United States on June 21, 2017
Verified Purchase
I loved reading Tempting Dusty(Temptation Saga Book 1), all about Dusty O'Donovan a twenty-three year old girl who is a bull whisperer & Zach McCray a thirty year old cowboy/rancher who knew Dusty's family when she was six years old & her dad worked for the McCrays! The O'Donovan's left Denver because their mother Mollie was dying from Leukemia, and her family wanted her to come home and die in Montana! The author wrote an amazing story about a young stubborn girl and the cowboy who literally fell in love the moment he laid eyes on her after seventeen years! This book kept my attention from page one until the last and I haven't been able to put it down! I can't wait to read book two!
Read more
2 people found this helpful
Helpful
Report abuse

Shelley Peters
5.0 out of 5 stars Will Dusty and Zach Ride Off into the Sunset Together?
Reviewed in the United States on March 9, 2019
Verified Purchase
Tempting Dusty is the first in the Temptation Saga and can be read as a standalone book.

Dusty and her brother, Sam, are trying to win rodeo prize money to bail out their small Montana ranch and some bills. They run into Zach, whose father their father once worked for, on their ranch as a ranch hand. Sam and Zach's brother, Cody, we're inseparable as kids.

Zach is really attracted to Dusty. She really wants to ride a bull named Diablo that no one has ever been on for longer than 3 seconds. There is a $500,000 purse to ride him for 8 seconds or longer. Zach, the bull owner, refused to allow Dusty to try, for her own safety. Dusty is also a barrel racer. Will they give in to their mutual attraction? What will Zach do when he discovers Dusty's secrets?
Read more
Helpful
Report abuse
See all reviews

Julie Fletcher
5.0 out of 5 stars Tempting Dusty
Reviewed in the United Kingdom on July 19, 2016
Verified Purchase
Life is a rollercoaster just gotta ride it yeeeee haaaaa, loved this, what emotional story, bull whisper hmmmm never heard of that before but loved Dusty, she's a spitfire heart of gold, her love for Zach, her illness etc.. She was willing to sacrifice her health for Zach. Zach loved her since she was ye high but the highlight of the story is Dusty been pregnant, she's a mom now, happily married momma with an absolutely gorgeous hubby.. roll on the next book
Read more
3 people found this helpful
Report abuse

patricia
5.0 out of 5 stars Easy reading
Reviewed in the United Kingdom on November 8, 2019
Verified Purchase
If you like country western type book it is brilliant, I enjoyed reading it.
Read more
Report abuse

Amazon Customer
5.0 out of 5 stars Tempting Dusty 5+*
Reviewed in the United Kingdom on March 23, 2018
Verified Purchase
Fantastic Cowboy story with Dusty and Zach...loved it! Can't wait to read book 2 if the first one is anything to go by. Definitely recommend Helen Hardt books.
Read more
Report abuse

Mandy
5.0 out of 5 stars A must read for the romantic
Reviewed in the United Kingdom on July 6, 2018
Verified Purchase
If you enjoy the emotional ups and downs that love so often does, this is the book for you. You won't be disappointed. Helen Hardt has expertly selected vocabulary that conjures the emotion of suspense, fear, lust and loss in her characters, which radiate from the pages, making it very hard to put down.
Read more
Report abuse

kumari
4.0 out of 5 stars Good read for passing time.
Reviewed in the United Kingdom on September 15, 2016
Verified Purchase
It was an enjoyable book to read. Definitely recommend it. Sweet and cute relationship. On to the next book now. Don't expect this to be anything like 50 shades of grey. Zachary however is very sweet and the perfect man.
Read more
One person found this helpful
Report abuse
See all reviews
Back to top
Get to Know Us
Make Money with Us
Amazon Payment Products
Let Us Help You
EnglishChoose a language for shopping. United StatesChoose a country/region for shopping.
© 1996-2021, Amazon.com, Inc. or its affiliates