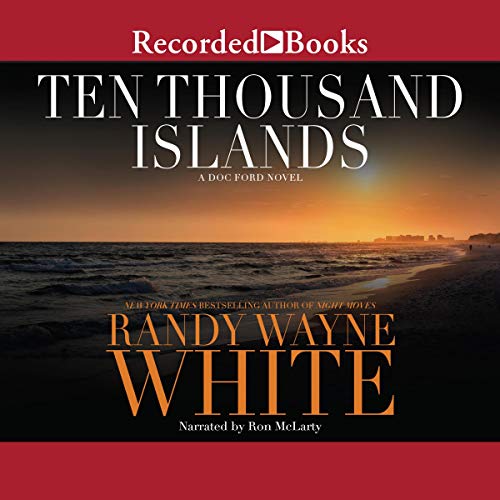 Randy Wayne White (Author), Ron McLarty (Narrator), Recorded Books (Publisher) & 0 more
4.6 out of 5 stars 479 ratings
See all formats and editions
Sorry, there was a problem loading this page. Try again.
Author of best-selling mysteries including Mangrove Coast, Randy Wayne White sets his novels in the Florida waters he knows so well - he is a veteran fishing guide and contributor to Outside magazine. Ten Thousand Islands is the seventh in the Doc Ford series.

Fifteen years ago, a teenage girl found an ancient gold medallion on a small island off the Florida gulf coast. Soon she was having nightmares and later was found hanging from a tree. Although the death was ruled a suicide, the girl's mother, Della, is now sure there was foul play. Her trailer has been vandalized, and her daughter's coffin raided. When Della comes to Doc for help, the mysterious gold medallion plunges the Florida marine biologist into a perilous search for answers.

Special invitation from Audible!
Learn more about Membership
List Price: $27.97
You Save: $4.02 (14%)
By completing your purchase, you agree to Audible’s Conditions Of Use
Sold and delivered by Audible, an Amazon company
Share

4.6 out of 5 stars
4.6 out of 5
479 global ratings
How are ratings calculated?
To calculate the overall star rating and percentage breakdown by star, we don’t use a simple average. Instead, our system considers things like how recent a review is and if the reviewer bought the item on Amazon. It also analyzes reviews to verify trustworthiness.
Top reviews

Tom G
5.0 out of 5 stars Ten Thousand Islands Scores a Ten!
Reviewed in the United States on August 9, 2014
Verified Purchase
White takes the reader out of their comfort zone and pushes the boundaries in this novel driving the reader to cringe and gasp at the details of the heinous acts that sick minds are able to put into play. The gore and shock are neither unnecessary chrome plating nor page fillers and at no time do they diminish the storyline. Unpredictable, well-thought out and woven into a fine fabric of suspense describes this effort and it is what I have come to expect from a Randy Wayne White tome. In Ten Thousand Islands he delivers yet another powerful reading experience worthy of your time.

What I like most is White doesn’t artificially protect his cast of characters; instead he opts to make them work to maintain their lives and their sanity. The villains take many forms and catch you off guard no matter how well you know this writer. Through it all White manages to work in just enough about the Florida ecosystem to make it educational and just enough Tomlinson to keep your karmic energy charged. If you have not yet tried a Randy Wayne White novel this is a good place to start.
Read more
5 people found this helpful
Helpful
Report abuse

Kindle Customer
5.0 out of 5 stars Great Book
Reviewed in the United States on June 16, 2015
Verified Purchase
This is the second Doc Ford novel I've read, and the author tells a good, interesting, and compelling story (as he did in the other one I read).
Doc Ford is a marine biologist with a background in spying or covert activities for the Feds during the Viet Nam war, an activity at which he apparently excelled, although the author doesn't spend much time on the background stuff.
Now Doc lives in a house on stilts near a marina in Florida, which marina is filled with people who are like family to him. He gets drawn into investigating sticky or mysterious situations, usually due to his association with his marina friends. Doc is a good guy with high morals, but one who is not afraid to dirty his hands if he thinks the situation/adversary deserves it.
This book is about a little girl who commits suicide, but who had a power to find Indian relics, some of which turned out to be quite valuable. Years after her daughter's death, her mother is being harassed and asks a friend of Doc's for help, and the friend, of course, enlists Doc. Lots of excitement ensues.
Read more
3 people found this helpful
Helpful
Report abuse

lemcbee
5.0 out of 5 stars RRW novels are being devoured by my husband
Reviewed in the United States on December 14, 2013
Verified Purchase
I bought my husband a couple of Randy Wayne White novels because we were going on a mini vacation to Sanibel Island, FL and had plans to eat at Doc Fords while there. He didn't read them before the trip because he was in the middle of another large book. But upon his return, he read the 1st 2 I got him at lightning speed, and then went out of town. When he returned, he found a stack of ten or so, and proceeded to go through them rather quickly too. Then he went out of ton again so I got him another stack. He has slowed a little bit, but still glued to them. He says their is a little bit of repetitive set-up in each one because it has returning characters, and this is to be expected in serial novels. Over all though, the more he reads, the more he seems to be enjoying them. I don't guess it really matters which one you start with and which order you go in. Anyway, he loves fishing and the water, so I figured these would be his cup of tea. A few years back I got him Linda Greenlaw's books and he love those so much, he reread them several times. She writes a different kind of novel, but the fishing and sea thread is there and tha's all it takes to get him "hooked".
Read more
2 people found this helpful
Helpful
Report abuse

Remlie
3.0 out of 5 stars Good plot and story line.
Reviewed in the United States on March 20, 2014
Verified Purchase
Some folks like lengthy, detailed explanations of stuff that does not affect a story line. I guess they are in favor of education at any cost. This book provides an abundance of explanation, some very intriguing plot twists and turns, some perspiration inducing moments of stark fright for the hero, Doc Ford, and a quick and painless end. It almost seems like White realized there was too much bumph in the book, and his page allotment was running low, so the story abruptly ended.

To my distress, the prior comments regarding Randy Wayne White as the "new" John D. MacDonald are far from the mark. It just isn't the same genre. Doc Ford is large, visually dependent on spectacles, strong as an ox, and about as cunningly crafty as the same animal. It's not John D. MacDonald revisited, by a land mass and a few backwaters. I do suggest you read White's books, but don't do so expecting less than a classroom study of ichthyology, and a cause for several naps during the reading.
Read more
3 people found this helpful
Helpful
Report abuse

Georgianna M. Bergeron
5.0 out of 5 stars Creepy . . . Dark . . . Haunting
Reviewed in the United States on November 20, 2013
Verified Purchase
This book is all of the above. I suggest reading some of the other reviews for excellent synopses of the story. The mood is dark, with the dug-up remains of a long-dead child, Ford's unusual reaction, and the powers the artifacts seem to have. Nothing overtly supernatural, but the weird feeling is there.

Augmented, of course, by some REALLY, REALLY nasty mean guys. When you see the power these men have, because of their wealth and total lack of scruples, you get the creeps all over again.

Of course we have the lovely boat rides over clear waters, the feel of being in the mangroves, with the bay, the fishes, the old Calusa haunts. We have Doc and Tomlinson interacting. Some decently interesting women. Oh, and a major hurricane.

Dawn M.
5.0 out of 5 stars Doc Ford - great series
Reviewed in the United States on December 25, 2019
Verified Purchase
Thank you for the quick delivery. I was out of reading material.

This my 7th book by Randy Wayne White & the Doc Ford novels. A bit different from my regards read & that why I like them.
Read more
Helpful
Report abuse

Martin Kilgore
2.0 out of 5 stars Failure to proofread earns this book only two stars because the publisher is an offhand, nonchalant, greedy chisler
Reviewed in the United States on December 8, 2014
Verified Purchase
For what I paid for this e-book I do not (NOT) want to see a typo sitting in the middle of it like a giant cow flop.

What? You want to tell me that with all the pencil pushers at that publisher's office nobody has the time to proofread the book before they put it out? You want me to believe that Penguin is too broke to hire a proofreader? Yeah right.

FYI a boat doesn't "plain". A boat planes. I know they know that because they get it right later on in the book.

So this fairly entertaining read gets marked down for its sloppy production. Sic simper schmuck
Read more
Helpful
Report abuse
See all reviews

A. Gill
5.0 out of 5 stars captiva-ting! 😉
Reviewed in the United Kingdom on March 14, 2020
Verified Purchase
Love Doc Ford novels having holidayed on Sanibel and Captiva a few times. Nice to know the places mentioned in the book. The novels are always a nice holiday read.... good plot and an easy read. Usually find something factual out that you didn’t know too! (Oh and this was a very light paperback which was good for the suitcase!)
Read more
Report abuse

David M
5.0 out of 5 stars Great read while down in Florida!
Reviewed in Canada on April 17, 2014
Verified Purchase
I always look for thrillers in the places I'm visiting - this one was perfect! Couldn't put it down - finished it on the last day of vacationing in Cape Canaveral.
Read more
Report abuse

J. Baxter
4.0 out of 5 stars R double W knows how to write.
Reviewed in Canada on June 18, 2016
Verified Purchase
White never disappoints, always a good read.
Read more
Report abuse
See all reviews
Back to top
Get to Know Us
Make Money with Us
Amazon Payment Products
Let Us Help You
EnglishChoose a language for shopping. United StatesChoose a country/region for shopping.
© 1996-2021, Amazon.com, Inc. or its affiliates