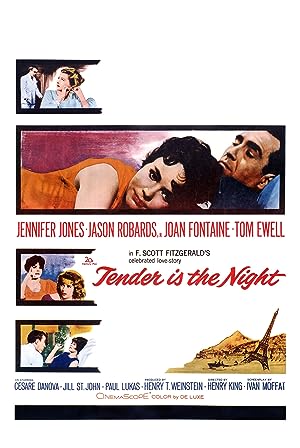 Tender Is The Night

Roger HowertonReviewed in the United States on July 16, 2021
1.0 out of 5 stars
Ho Hum
Verified purchase
This review is for the Fox Cinema Archives MOD-DVD.

I'm sorry, folks. I purchased this mainly because I was loving every film with Jennifer Jones that I saw, going from one to the next like a hummingbird going from bloom to bloom, until I hit this brick wall.

Was there even a plot to hold together this nearly two-and-a-half-hour bore fest? I must have missed it, because virtually nothing happens. A psychiatrist falls in love with his patient and marries her against the advice of his older, wiser, close friend and mentor. Ho hum. Yawn. We don't even get a psycho murderer to liven things up.

I can't believe 20th Century Fox ever thought this would turn a nickel. Pitiful.

After seeing Jennifer Jones in The Song pf Bernadette, Portrait of Jennie,  Since You Went Away, Love Letters, Madame Bovary, Good Morning Miss Dove, Man in the Gray Flannel Suit, Gone to Earth, and even Duel in the Sun, I suppose I was a little overconfident that she couldn't make a bad film.

But I guess all of the greats had their pitfalls (such as Cary Grant in The Amazing Adventure, or even Jimmy Stewart in No Time for Comedy), so Jennifer is forgiven, but you still gotta wonder why anyone who worked on this film thought they had something that anyone would want to see.

And this film was released in 1962, long after the studio system had collapsed, so no one can say they were made to do it.

And the worst part is that Fox Cinema Archives took a widescreen picture and did that "formatted to fit this screen" thing to it, reducing it to a 4:3 pan-and-scan that ruins any scenery of the French Riviera.

LuzmarinaReviewed in the United States on June 30, 2018
5.0 out of 5 stars
FASCINATING INSIGHTS INTO THE LIVES OF A POWERFUL HIGH-SOCIETY COUPLE, PLAGUED BY THEIR INNER DEMONS!
Verified purchase
CANDID LOOK AT THE PRIVATE LIFE OF THE RICH AND FAMOUS AND THE PRICE THEY HAVE TO PAY! JENNIFER JONES IS RAVISHING AND OUTSTANDING IN HER ROLE AS THE TROPHY WIFE OF HER EMOTIONALLY WOUNDED DOCTOR/HUSBAND, THE COVETED ACTOR JASON ROBARDS,.IN A FLAWLESS TOUR DE FORCE PERFORMANCE. THE LOCATIONS AND SUPPORTING CAST COMPLETE THE PICTURE, LITERALLY. RIVETING STORY FROM BEGINNING TO END! DON'T MISS IT!
5 people found this helpful

Luana ZentnerReviewed in the United States on May 2, 2021
5.0 out of 5 stars
Who doesn't enjoy John F Fitzgerald
Verified purchase
John F. Fitzgerald screen 0lys are always a good feature. The cast was outstanding!

Lady in the Pink HouseReviewed in the United States on February 18, 2020
5.0 out of 5 stars
Good movie
Verified purchase
Thoroughly enjoyed watching an old favorite again.

murrie redmanReviewed in the United States on June 3, 2014
2.0 out of 5 stars
Casting Is All
Verified purchase
The book can be somewhat confusing and the movie duly clears that up, but the casting of Robards is unfortunate. Our first sight of him is in a bathing suit. The director did try to cover the actor's weak shoulders somewhat with a robe, but at first glance, too late, gone was our seeing him as a romantic hero. His shortcomings are somewhat overcome in the latter part of the story when his character becomes the fading, "kept" older husband in an affair with the same woman who is now a worldly and wealthy actress. Jennifer Jones was marvellous as the dusky, mad beauty whose eyes reveal everything that roils in her dark mind. The costumes and setting were true enough, but other casting was a little weak, too. Robard's lover at the start, did not have that delicate ingénue actress quality. On the other hand, the drunken pal who played the haunting title song on the piano, was perfectly done. It bothered me, however, that someone doing the set, would think to place a wrecked upright piano on the view patio of an elegant pink villa in the Rivera. And what about rain? It must rain sometime. After seeing, and buying to treasure, the perfect "Great Gatsby" film of old with Mia Farrow et al, this Fitzgerald one was a bit of a disappointment.
4 people found this helpful

NickLReviewed in the United States on March 6, 2013
1.0 out of 5 stars
Don't Buy This DVD-R
Verified purchase
This wonderful film has an old transfer - it is Panned and Scanned with a 4:3 aspect ratio.
It is outrageous for Fox Archives to publish this movie without a good widescreen transfer.
Contrast this release with Warner Bros. Archives: I have dozens of their titles, all correctly
transferred.
52 people found this helpful

sistajenReviewed in the United States on October 31, 2017
5.0 out of 5 stars
Good golden age movie
Verified purchase
Loved this old movie from the passed.Great to see some good acting from some great actors.
See all reviews
Back to top
Get to Know Us
Make Money with Us
Amazon Payment Products
Let Us Help You
EnglishChoose a language for shopping. United StatesChoose a country/region for shopping.
© 1996-2022, Amazon.com, Inc. or its affiliates