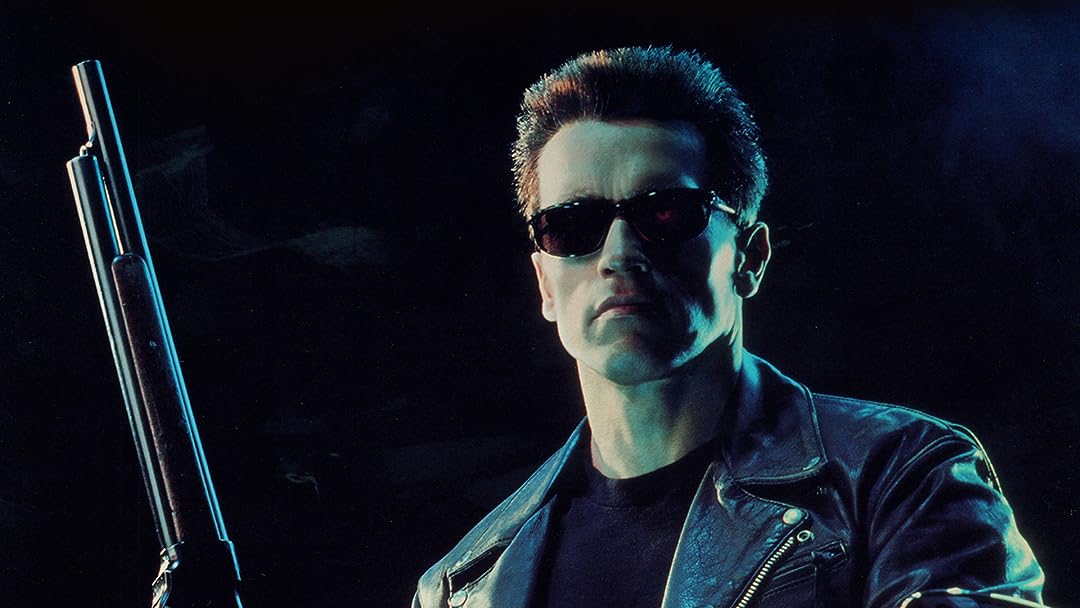 (25,921)
8.62 h 17 min1991X-RayR
The non-human machine ruling elite of the nuclear war-torn future has dispatched a cyborg assassin into the past to kill a young boy because he soon will be the resistance leader against the machines.

A. M.Reviewed in the United States on December 27, 2017
1.0 out of 5 stars
Buyer beware!
Verified purchase
The movie is awesome but the 4K version leaves a lot to be desired... Where do I start? First off, the 4K version is ONLY the theatrical cut and DOES NOT have 3 versions of the film. Second, The transfer is garbage.. absolute garbage! DNR makes Arnold look waxy and gives the motion a “smeary” quality where it’s used. There is NO EXCUSE for this with 4K and this is by far the worst looking 4K transfer. There are moments where this does shine but the DNR usage totally takes you out of the movie. The second Blu-Ray release (the one that came out after the Skynet edition) is better over all because it was remastered without DNR. If it’s true that James Cameron approved the 4K remastering, he’s clearly lost his mind!
488 people found this helpful

Jesse D.Reviewed in the United States on December 27, 2017
1.0 out of 5 stars
To clear up confusion: SPECIAL EDITIONS ARE NOT AVAILABLE IN 4K, ONLY THEATRICAL
Verified purchase
Safe to say that I am extremely disappointed if not outright angry at this release. T2 is one of my favorite movies and I was very excited about the 4k release. After being delayed many months I finally have my copy only to find that only the Theatrical release is available in 4k. None of the special editions are available in 4k which is mind boggling. To add insult to injury, the 4k transfer does not look good at all. Way too much DNR.

I would highly recommend that you avoid this version until they come out with a proper release.

Jimmy BlackReviewed in the United States on July 18, 2018
5.0 out of 5 stars
The arm is awesome, but the US market got screwed out of the 3D disc and the soundtrack...
Verified purchase
This review is for the Terminator Endoarm Collectors edition only. I don't understand why Amazon REFUSES to stop grouping everything together. The arm itself is awesome. Its lightweight plastic and comes complete with plastic "glass" display tube. The plastic is chromed and detailed and looks just like the Terminator arm from the movie. The bottom of the display includes an edition number of ?/6000 and includes a replica of James Cameron's signature. The movie itself is great, however the version we get is a letdown. This was converted to 3D for the theater, but the 3D version is only available in Europe because 4K is being pushed hard here. Even though it would have cost less than a few dollars to press the 3D version and include it here, the company decided against it. The 4K version we get is just the 137 minute version. They couldn't be bothered to include and remaster the remaining footage, even though this movie has been released in at least 30 different variations, formats and versions. The set itself could have been better and the movie version as well. The arm however is worth it. I paid 135.00 for it.
76 people found this helpful

PakmanReviewed in the United States on January 6, 2018
1.0 out of 5 stars
4K Ultra HD: Not the T2 You are Looking For
Verified purchase
Concerning the 4K Ultra HD Version: Unmarked German release; opens to German menus - mentions it is about to open in 3D (?). German soundtrack in 7.1 sound, English version is only in 5.1.

Cody RussellReviewed in the United States on July 22, 2018
4.0 out of 5 stars
the quality of the 4K is great in my opinion
Verified purchase
This review is for the 4K Endo Arm version of T2. I gave four stars, but wish i could go 4.5.

First off, the quality of the 4K is great in my opinion. I've heard some people complain that Arnold's terminator makeup looks waxy in the new print, but for a 27 year old movie, We watched this on a 135 inch screen and a 4K projector. It looked fantastic and I don't think you can scoff at it. there have been some edits and effects cleaned up (stunt men faces replaced, the trucks windshield continuity fixed in the flood tunnels, etc) but they look good. However, though the picture looks great, but my only complaint is it's ONLY the theatrical print that's in 4K. With the directors cut available for so long now, I can't imagine anyone choosing the theatrical cut for viewing. This is my only reason for not jumping to five stars on the review. I have a great Blu-ray of the director cut, so I guess I'll live.

Now for the Endo Arm. I do love the arm. I had ordered this previously for $119.99 and my order was cancelled last fall/winter when production was put on hold. With the Amazon pre-price guarantee, I got it for $134.99 and I think its worth every penny. It's not made out of metal as some have said, but for $135, you should expect that. It's light and some have said that they feel like it's cheap when they pick it up, but I plan for it to just sit on the shelf. Some molding lines are visible, but the other details are great. The James Cameron autograph is not real as was previously promised, but that would have driven the price up i'm sure. I collect autographs and the only ones i enjoy are the ones i've gotten in person anyways.

I think it looks awesome on my shelf. Honestly, my only complaint is that the acrylic dome is flat on top. I thought it should have been more rounded like in the film, but I can't complain too much. If you're on the fence, I'd say get one while you can. Though it has issues, I feel its one of those items you'll regret passing up. If you don't like it, you can always sell it later I'm sure.

TerminatorReviewed in the United States on July 22, 2018
5.0 out of 5 stars
T2 4k Arnold has noticeable chest hairs
Verified purchase
I have been waiting for this. Ever since the Collectors edition was announced I knew there was no way I could pass it up. I had to have that Endo arm.

I was heartbroken when it was canceled due to production issues. Once it was announced that it was coming out again I counted down the minutes to release.

With that said I have to say when I received mine I was excited that I finally have it after waiting so long for it. After reading some reviews I am not sure how I feel about it now. Yes it looks nice. The paint app is excellent and really does look like real metal. There are metal made Endo arms out there but cost much more than this. Would I consider this a real true collectors item? Yes and no. It is limited to 6k but I think it would have made it more of a collectors if James actually signed each of the stickers. I've bought other collectors items that featured a real signature and cost about the same as this. Plus at $174 I don't think it is worth it and that is coming from a Terminator fan like myself. Luckily I got for the pre order price but even that I think is a little too much. Not to mention the UK version got extras such as 3D blu ray and the soundtrack.

Now the 4k remastered version of T2 is absolutely amazing! The deep blacks and poping colors. Some people are upset over the removal of the film grain but me personally I don't like film grain that much that just makes this film even more crisp. Some people say it lost detail and the actors look like plastic due to film grain removal. They must be on something or have their system set up wrong. I've noticed detail that I haven't seen before even though I've seen this movie 1,768 times. Very first thing I notcied is that Arnold has chest hairs when he walked into the bar. Freakin chest hairs!! Never noticed that with the standard version. Not to mention they also cleaned up the stunt doubles face so that it actually looks like Arnold and not Zack Efferon.

Overall I am not sure how I feel about the Endo arm yet but it does look cool in my collection. The five stars is for the 4k version of T2.
26 people found this helpful

DavidReviewed in the United States on July 25, 2018
5.0 out of 5 stars
Come with me if you want to live. (And get an awesome replica Endoarm!)
Verified purchase
The Endoarm is highly detailed, great dark chrome appearance, and an awesome display piece for the price. Even though it's light weight plastic, it looks like authentic metal. The display base and plastic tube are a nice touch, even though it's not quite exactly like in the movie. The arm itself seems to be slightly larger than 1:1 scale, but it is supposed to be Arnold's arm. So glad they finally released this after it was canceled last year. The price went up, but thanks to Amazon's low price guarantee, at some point between my pre-order and delivery, the price dropped near what it was last year. As for the 4K disc, I don't yet have a 4K player or TV, but I'm shopping for one now. Originally, they were supposed to include the 3D Bluray, but then it was only released in the UK. I was pretty excited about that, but since 3D TVs are pretty much over, hopefully VR takes off as a medium for watching 3D movies in the future. The 3D version in the theater was so much better than I anticipated. The 4K transfer includes some of the new enhancements made for the 3D theatrical release, which I guess is cool, except we need the proper T2 Extended Edition in 4K. Overall, my 5 stars are for the Endoarm and how awesome it is to finally have one that looks great and is affordable!
15 people found this helpful

BzReviewed in the United States on November 21, 2021
1.0 out of 5 stars
Lazy and misleading 4k release.
Verified purchase
When looking for a T2 UHD, I specifically wanted to make sure it included the Special Edition versions with additional footage. I was satisfied when I saw the text, "view 3 different versions of the film," but neglected to check the comments which point out how misleading this is: the included 1080p blu-ray includes the other versions of the film, but only the theatrical version is available in 4k.

Not ending there, the 4k video is very lazily mastered, with excessive digital noise removal over-smoothing the image and removing detail. As an example of just how little they paid attention to this release before shipping it, they have apparently worked from the same source files they used to create the 3d conversion of the movie...but forgot to remove or change the screen at the beginning that credits StudioCanal for the 3d conversion. It's almost like no one even bothered to watch the final product before sending it out to be pressed.
7 people found this helpful
See all reviews
Back to top
Get to Know Us
Make Money with Us
Amazon Payment Products
Let Us Help You
EnglishChoose a language for shopping. United StatesChoose a country/region for shopping.
© 1996-2022, Amazon.com, Inc. or its affiliates