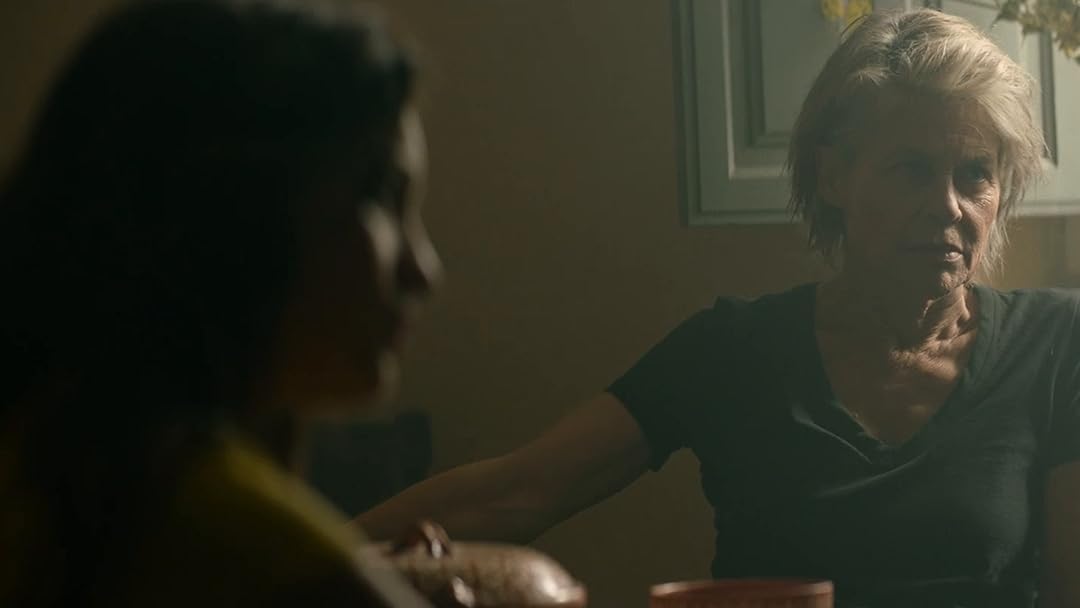 (51,054)
6.22 h 8 min2019X-RayR
More than two decades after the events of Terminator 2: Judgment Day, Sarah Connor sets out to protect a young woman named Dani Ramos and her friends, as a liquid metal Terminator, sent from the future, attempts to terminate them.

Manny Fresh Reviewed in the United States on November 6, 2019
1.0 out of 5 stars
Garbage.
By now, you've probably heard from many people that this movie is terrible. Unfortunately, they had to learn this the hard way. If you haven't seen it, you get the benefit of saving your time and money, maybe even your sanity.

From the beginning, this movie completely disrespects T1 and T2. For example, in the first five minutes, you see a young Sarah and John Connor relaxing together. Then a terminator abruptly comes and shoots John Connor in the chest, killing him. Already, they made all the efforts of T1 and T2 useless. Then the terminator feels bad about it, retires to the woods and starts a family. According to Kyle Reese in T1, the terminators don't feel pity or remorse. Therefore, this aspect of Dark Fate sounds like one big joke. Some people walked out of the theater after watching John Connor get killed in the first five minutes. However, this movie was so awful that if people saw it on a plane, they would still walk out.

MacJunegrandReviewed in the United States on November 2, 2019
2.0 out of 5 stars
Terminate it
I was very forgiving of Terminator: Genisys, perhaps because it plays up with one of my favorite time travel tropes: the return to established scenes with a new twist. Back to the Future 2 did this masterfully, and I think Genisys did a nice job too. Looking back, it's easy to understand why people could think it's an insult to the franchise, but I think that, for all its issues, it was made with love for it.

What I don't understand is how people can be mad at that film and praise this one, when it seems entirely dedicated to insult all previous existent movies in the series. Dark Fate negates the existence of every sequel after T2: Judgement Day, it craps all over that film's ending in the very first scene and it then proceeds to ignore, poorly reinterpret or outright contradict all messages the first two films gave us.

Ever since the first film, these movies have been stagnated in the same basic plot. Save for Salvation, which took a completely different approach and setting, all other movies, including Dark Fate, have had the same structure with minimal differences. If you've seen any Terminator film other than Salvation, you've seen this one. There's nothing new here. Terminator 2 is an excellent action film, but it's basically a better version of the first one. It's not the Aliens to Alien, it's the Home Alone 2 to Home Alone. Meanwhile, all the other non-Salvation Terminator films, this one included, have taken the same formula but done little new or interesting with it. It was understandable for T2 because it played with expectations and built on the established lore. But for a film like this one, that makes a point of trying to distance itself from the characters and lore of the first one, it's unforgivable.

Lack of care in the writing is not this film's only problem. Acting is all over the place. Arnie is the best part of the film, as he's always been. He plays his role fantastically, and he has the best lines in the film, but he seems to be the only one that tries. Linda Hamilton as Sarah Connor feels like she's playing an entirely different character rather than a developed version of her. She has two modes: not caring and overly angry. Mackenzie Davis plays the "augmented" human Grace, but she seems to think she's playing a robot due to her "expressions". Meanwhile, the girl who plays Dani, whose name I don't have the motivation to look up, is one of the worst actresses I've seen in a long time. Tommy Wisseau could teach her a thing or two about acting. The guy who plays the new Terminator does an OK job, but he completely fails to be intimidating. Whether that's his fault or the writing's, I can't say.

On the positives, the action is alright. Nothing new or out of the ordinary, but it's competent and mostly well shot. Special effects are OK for the most part, though there are some impressive deaging effects at the beginning. You'll swear they used actual time travel to bring young Linda Hamilton to film a scene, and I'd be more willing to give praise if that scene hadn't irritated me so much for aforementioned reasons.

I really have no reason to recommend this movie. Any other Terminator film (again, save for Salvation) has the same story and structure and surpasses this film in writing and acting. Plus, if you're a fan of the first two films, you're likely to be at least annoyed if not outright angry at this one. If you just want to see some action, watch one of the old films instead.

Nina DiSantisReviewed in the United States on November 1, 2019
5.0 out of 5 stars
Best terminator since T2
I don’t care what anyone says, this was the terminator we needed! Shoutout to 80s kids!
540 people found this helpful

jwwReviewed in the United States on November 2, 2019
4.0 out of 5 stars
Fun blockbuster
Terminator: Dark Fate is just a very entertaining blockbuster. The action is really good. The locales look nice. There's a nice violence-to-story ratio. Decent dialogue with a string of some very funny lines.

I noticed that a lot of reviews have criticized this movie for having the same basic structure of the original films. I suppose this is true, but I found the movie did a good enough job that it didn't bother me. However, there was one moment of synchronicity with the first film that I could've done without.

I can't go into details but this movie does one thing that some of recent action/adventure films set decades after the original or originals do that is kind of annoying and a bit jaded.

Linda Hamilton makes this film. She is now tough, doesn't give-a-frick old lady and steals whatever scene she is in. Some of the best parts is her interaction with Mackenzie Davis' Grace, who is an augmented soldier from the future. They both have the same goal but different attitudes and their verbal sparring is fun.

The new antagonist the Rev-9 is a combination of the original Terminator and Terminator 2's the T-1000. Despite the retreading, he actually feels fresh. He's got a pretty neat ability and his Terminator form may be the creepiest of them. The mannerisms of his human form (Gabriel Luna who was Ghost Rider on Agents of Shield) may be too similar to Robert Patrick's T-1000 for some, but Luna does a great job in the role, switching from emotionless machine to someone charismatic who can blend in.

Definitely liked this better than T3 and Salvation, and I was one of those people who liked the latter. (Haven't seen Genesys, yet.) But, I admit this doesn't quite have the specific James Cameron feel of the first two films. As I said, this is a blockbuster and in terms of just being entertaining and not being innovative it does what I was looking for.
313 people found this helpful

JJ JohnsonReviewed in the United States on November 2, 2019
1.0 out of 5 stars
1 Dimensional Characters ... uninteresting movie
Both the "good" and "bad" terminators were killing cops/guards. Both terminators were "psycho tough and nasty" with no character development which led them to that point. Walked out of movie after 25 min. Wanted to wait to at least see Arnold … couldn't wait.

Thought going into this movie that there was no way they could screw this up … and they figured it out. Too bad.

Sarah Connors looked totally CGI … her character was 1 dimensional with no sense of hope … she was as psycho and uninteresting as the terminators. Maybe Sarah was a terminator, that would of been interesting to find out at the end of the movie … maybe I left too soon?
344 people found this helpful

P. RiddReviewed in the United States on January 24, 2020
1.0 out of 5 stars
Terminator 2: Feminism Edition
Since Amazon deleted my first 1-star review for no reason, here it is again. This movie is nothing but a bad remake of Terminator 2 with a race/gender swap for Jon Conner and the bodyguard Terminator. Not surprising considering what is coming out of Hollywood, a town that looks the other way when it comes to pedophiles but loves to lecture us on "social injustice". Another franchise ruined by Hollywood politics.
248 people found this helpful

JpReviewed in the United States on November 6, 2019
1.0 out of 5 stars
Rather have watched paint dry
1 film that should have never been made..
145 people found this helpful
See all reviews
Back to top
Get to Know Us
Make Money with Us
Amazon Payment Products
Let Us Help You
EnglishChoose a language for shopping. United StatesChoose a country/region for shopping.
© 1996-2021, Amazon.com, Inc. or its affiliates