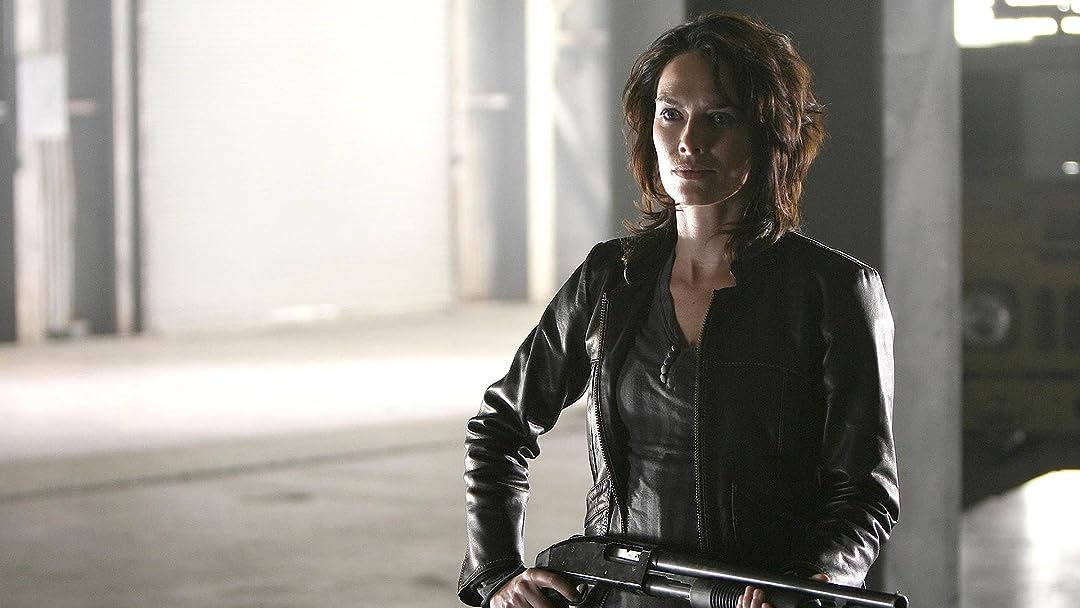 (2,285)
7.62008X-RayTV-14
At the end of "Terminator 2: Judgment Day," Sarah Connor vanquished the Terminator sent from the future to kill her 15-year-old son, John. Sarah and John now find themselves alone in a very dangerous, complicated world. Fugitives from the law, they are confronted with the reality that still more enemies from the future and the present could attack at any moment.

John CoxReviewed in the United States on February 25, 2019
5.0 out of 5 stars
Excellent series that blows away all the movies that followed T2
Verified purchase
This series is excellent and completely blows away all the movies that followed T2. The series picks up about 5 years after T2 and shows John Connor, his mother, and a terminator fighting to prevent judgement day. It seems that even though they blew up a lot of stuff in T2, Skynet isn't going to go away that easily. This series is outstanding in many ways and adds new characters that give it depth and multiple great storylines. Honestly, they should have skipping making additional movies after T2 and simply thrown all their backing into this series. It should have easily run for at least 4 or 5 seasons instead of being cancelled after season 2 due to the studios making Terminator 3. Like Firefly, this is a greatly underappreciated series that the studio mogules killed off never realizing they had an underground runaway hit on their hands.
23 people found this helpful

Greg B. GallagherReviewed in the United States on October 2, 2016
5.0 out of 5 stars
Phenomenally under-appreciated series!
Verified purchase
One of the best sci-fi series there was.. until Fox terminated it for no reason. We'll never see season three, and should I ever build a time machine I might be tempted to go back in time and take out the Fox exec's mother who was responsible for it's cancellation. Seriously.

Summer Glau was quite believable as the complicated, "more going on than she's letting on" terminator Cameron. Brian Austin Green plays a soldier from the future, and surprisingly does a strong job, especially in Season 2's Episode 5 "Goodbye to All of That". Lena Headly does a solid job at Sarah Connor, and Thomas Dekker as a teenage John Connor was completely under-rated. It was a solid cast, a superb plot and story arc and premise. The show was just getting off the ground, and had there been a Season 3 would have gone in an awesome direction.

Ah, forgot to mention two others in the cast. Shirley Manson (from "Garbage") plays a seriously cool bad/good terminator. She has acting chops that I wasn't expecting. Garret Dillahunt is one great actor, who plays Cromartie/John Henry. He brought a bit of personality to the whole stone-cold emotionless terminator character. "Thank you for your time." (fake smile). Leven Rambin plays John Connor's girlfriend and was quite a good actress. Last but not least, Stephany Jacobsen is just dan good in anything she is in.

So thank you, Josh Friedman, for this show. It was one of the truly best and in my mind, trumped any Terminator movie that came after T2. We saw what you were doing with the show, where you were taking it, and it was killed off in it's near prime. A tragedy, but none-the-less I'd rather have had two seasons with a cliffhanger we'll never know the conclusion on, than never having seen this show to begin with. It was great!

Chris HansenReviewed in the United States on October 27, 2019
5.0 out of 5 stars
Best Sci-Fi Show I've Ever Seen!
Verified purchase
Like most fans, I became interested in Terminator: The Sarah Connor Chronicles because I liked the movies. The pilot episode was similar, but the show is so much more than that. Which is good, because doing chases every episode would be boring. It's really a family drama that's set in the Terminator universe. There's some surprises and plot twists, especially the season 2 finale. Season 1 has more action, but season 2 really shows the character development and family dynamics. Each character has so many layers and mysteries that I found myself wanting to know more about them and how it affects their present-day decisions, especially Derek and Cameron who are from the future. As a result, it's the first show that I ever watched the DVD commentaries for. And Lena Headey is excellent - smart and tough but vulnerable and compassionate also. I can't recommend it enough. It's my favorite show, and I really hope that season 3 will be made at some point. Especially as the movies haven't really been that good since Terminator 2.
10 people found this helpful

PatriceReviewed in the United States on November 23, 2022
5.0 out of 5 stars
Absolutley Brilliant!
Verified purchase
These stories are just plain enjoyable. It gives an in-depth look at the lives of Sarah and John Conner. I really enjoyed the addition of "Cameron", John's terminator protector. The inclusion of John's uncle is a very enjoyable surprise to the plot as well. I enjoy everything Terminator. All of the actors in this series seemed to really play well off of each other. I will say that this series is a slight departure from the theme of the movies, but I feel that this is why the stories are so enjoyable. My only regret is that there were not more of them made. I am a life long die hard science fiction fanatic. I rank these in my top 5 of my all time favorites. My husband agrees as well.

ABCReviewed in the United States on August 8, 2022
5.0 out of 5 stars
Great Show!
Verified purchase
Wonder why it was cancelled after 1 season. Probably because not too many people knew about it. I 1st saw it via mailed DVD from Netflix back in 2008 or around there. Back when I had a PS3 and had to use a Netflix disc in it to watch Netflix but those you couldn't stream you'd order physical DVD discs to watch. This show was one that I did that with. Think the full 1st season was like 4-5 discs. Don't remember. Anyway this purchase is half the price than Vudu's!.. though they offer UHD, but UHD isn't worth $7 plus tax to me! Lol

WayneB63Reviewed in the United States on February 4, 2017
5.0 out of 5 stars
Great series, well worth watching
Verified purchase
Was well directed and follow close to the storyline of the movies (close enough to fit in). Lena Headey, Summer Glau and Thomas Dekker, deliver top notch performances all the way through the series, and as someone has mentioned , what guy wouldn't want a smoking hot teen terminator watching over him day to day? Especially Summer.
I could go on about the rest of the cast as well..solid performances' by each and every one of them.
I will say that if you have a weekend off and want to veg out on something in front of the TV. This is a great series to do it we.
14 people found this helpful

Theodore CerameReviewed in the United States on April 28, 2016
4.0 out of 5 stars
First to Last
Verified purchase
First season impecable, five star. Regarding the second season; if Sargent Bilko was not quite so aggressively nasty, and the young John Connor (well schooled in subterfuge), showed more sense about associating with an obviously insincere damaged-goods person, and they kept the amazing Summer Glau more in the foreground, I may have rated season Two with five stars. Also there is too much that goes on without closure such as Ms. Weaver; What is it? Who's side is it on? Why does it murder indiscriniately? And how did Riley reemerge from the future after it was established that she had been completely in the dark about what was really going on while she was attempting to infiltrate into John's life to distract him from the beautiful Cameron, who, though a machine, wouldn't be the first to develop, evolve to quality human emotions: "I love you John. And I know that you love me."
Yea I feel sorry for Summer in that had the writers employed better literary balance the show would have went on indefinitely; a boom she deserved.
9 people found this helpful

Kevin Sivils - KCS Basketballl EnterprisesReviewed in the United States on November 20, 2015
4.0 out of 5 stars
Should have been the Cameron Phillips Chronicles
Verified purchase
The series suffers from one critical flaw. Cameron Phillips should have been the focal point of the series. The creator and writes of the TV version of the Terminator franchise did not get it - the TERMINATOR is the central character!

Summer Glau was magnificent as Cameron Phillips, the beautiful teenage female Terminator sent back in time to protect the teenage John Connor. Glau created a mysterious Cameron. Does she love John or want to kill him? Can Cameron really feel emotions or is she simply the best infiltrator Skynet ever created?

It's a shame the series only ran for two seasons. Worth watching if you are a fan of the Terminator franchise - simply because Summer Glau is worth watching as Cameron.
12 people found this helpful
See all reviews
Back to top
Get to Know Us
Make Money with Us
Amazon Payment Products
Let Us Help You
EnglishChoose a language for shopping. United StatesChoose a country/region for shopping.
© 1996-2022, Amazon.com, Inc. or its affiliates