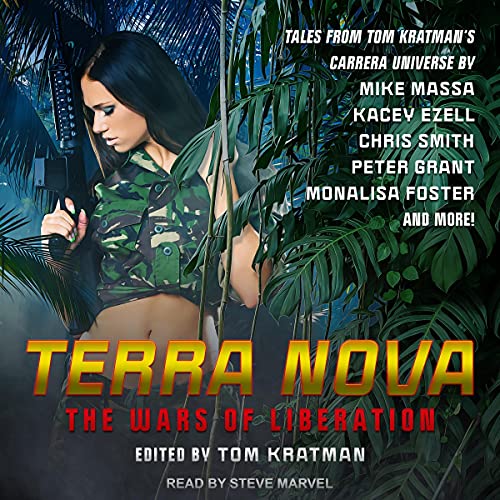 Terra Nova: The Wars of Liberation

"Send us your tired, your poor", says the inscription at the base of the great statue, "your huddled masses yearning to be free".

But the future of the colony planet, Terra Nova, and its relations with Old Earth is far more a case of boot out your tired, your poor, your dissidents, and troublemakers. Use us for a dumping ground for all your problems. Go ahead and abandon these here. This may have been fine, too, but for the UN and its corrupt bureaucracy insisting on maintaining control and milking the new world and its settlers, willing and unwilling both, bone dry.

Contained herein are tales of the history of mankind's future first colony, from the first failed attempt at colonization, to the rise in crime, to the rise in terrorism, to its descent into widespread civil war and rebellion...and ultimately, liberation. As with most of human history, this history is messy, with good men and women turning bad, bad men and women inadvertently doing good, and blood flowing in the streets.

Nillspace
5.0 out of 5 stars All the mortar for the bricks to build a Carrera. House
Reviewed in the United States 🇺🇸 on January 8, 2023
Verified Purchase
I read these fast with relish. I can recommend all the authors for their two feet in the muck of a projected ultimate end point of a tranzy evolved social order. Will this penetrate any thick skulls? Who knows!
Read more
Helpful
Report abuse

SDM
VINE VOICE
4.0 out of 5 stars Fair installment of the series
Reviewed in the United States 🇺🇸 on October 11, 2019
Verified Purchase
This set of linked short stories are a good but not great contribution to the author's main series of novels. I would highly recommend you read the series starting at the beginning or you really won't understand the context for some of these stories. Part of the fun of these series is being immersed in a complex alternate world with all of it's personal drama, politics and conflict. You will miss a lot by just dropping in on this small slice of that universe. The book is edited decently for the most part.
Read more
3 people found this helpful
Helpful
Report abuse

Phantom Cruiser
4.0 out of 5 stars Back to Terra Nova
Reviewed in the United States 🇺🇸 on October 8, 2019
Verified Purchase
This is a collection of short stories all dealing with the new planet and her newly established colonies. Many of the places are very familiar to those readers of the "Carreraverse" and some long back stories are fleshed out here. Leading to some new questions (of course).
Good reading all around.
Read more
Helpful
Report abuse

A. Yoshida
4.0 out of 5 stars Worth the Read
Reviewed in the United States 🇺🇸 on October 26, 2019
Verified Purchase
This is worth the read overall. Some of the stories are only ok, but at least three of them - the one set in alt-Vietnam, the one in alt-Mexico, and the one regarding the UN are excellent and more than enough to encourage me to pick up the next volume.
Read more
Helpful
Report abuse

G. S. A. Estus
5.0 out of 5 stars A must read for Kratman fans
Reviewed in the United States 🇺🇸 on December 11, 2019
Verified Purchase
The Col has put together a top notch group of authors to write stories set in his universe. well written individual stories separate yet adding to the whole. I literally had a hard time putting it down. Each small story is a part of the big picture. Like frames from a movie.
Read more
Helpful
Report abuse

Duffy
5.0 out of 5 stars A very good read
Reviewed in the United States 🇺🇸 on September 8, 2019
Verified Purchase
Provides some in depth detail on the background of the Geopolitical situation in Tom Kratman's Carreraverse.

Several of the stories are worthy of the screen, big or small.

The Long, Dark Goodnight would make a fantastic story on screen.

All in all, a good set of reads for any Fan of Heinlein, Pournelle, Ringo or Kratman.
Read more
2 people found this helpful
Helpful
Report abuse

Chandler
5.0 out of 5 stars Solid exploration and history in the Carreraverse
Reviewed in the United States 🇺🇸 on August 19, 2019
Verified Purchase
The authors all did an excellent job of delineating the history of Terra Nova, from the ill-fated Cheng Ho mission up to Col. Kratman's story, which finished the anthology. Eagerly awaiting further books in the series, as well as the culmination of the Carrera arc. Well worth reading.
Read more
Helpful
Report abuse

William Byrd
5.0 out of 5 stars Tons of Intensity
Reviewed in the United States 🇺🇸 on October 9, 2019
Verified Purchase
Great Great book. Explains the history of Terra Nova in a series of mini stories.. The first ship. The abuses of the privileged in society. Great action. You will not be disappointed. I cannot what for the next book
Read more
Helpful
Report abuse
See all reviews

CYMRO
4.0 out of 5 stars Curate's Trixie Eggs Short Story Collection.
Reviewed in the United Kingdom 🇬🇧 on January 16, 2020
Verified Purchase
Most of these short stories are good,I enjoyed some more than others,as is inevitable in any Multi-Author Collection. Adds a LITTLE to the "CarreraVerse" as to what happened on Terra Nova before the Worlds turned. I had hoped that there would have been a Collection on the Wars between the Terra Nova States prior to the MAIN story line,but that it seems is unlikely. As ever,we must await the next episode in the Main story line as regards the change of status of the Tauran Union,etc.Can but hope the next and last[hopefully not!]volume will come out faster than the last one!
Read more
Report abuse

Ian Hannant
5.0 out of 5 stars Good read.
Reviewed in the United Kingdom 🇬🇧 on November 20, 2019
Verified Purchase
Great introduction to the Carrera series, fleshing out the back story, hinted at in the Krattman books. The stories are well written and mesh well together. Damn good read TBH. Can't wait for the second in the series.
Read more
Report abuse

Scott Osmond
5.0 out of 5 stars Great Lineup
Reviewed in Australia 🇦🇺 on August 25, 2019
Verified Purchase
Kratman has assembled a great team for this collection. Terra Nova is the canvas on which the messy future of humanity is painted. All the vertues and vices of the powerful and powerless are on display. It's hard to tell which was the best but the first entry deserves an honourable mention. Modern policeing from what I've read in the media and have been told by recently retired officers is a mess of sensitivity training, insane levels of paperwork and identity politics. Shoehorn this concept of policeing on a multi-ethnic and national colony ship to the stars. Oh, and try not to cry as things inevitably unravel. I can't say I enjoyed it as it's only to possible given modern politics and international governance. The other stories cover the budding resistance to the UN's polocies. Lest a reader think some of the activities described are over the top read how UN peacekeepers treat locals where they operate. I'll be eager to read the next collection of stories in this setting.
Read more
Report abuse
See all reviews