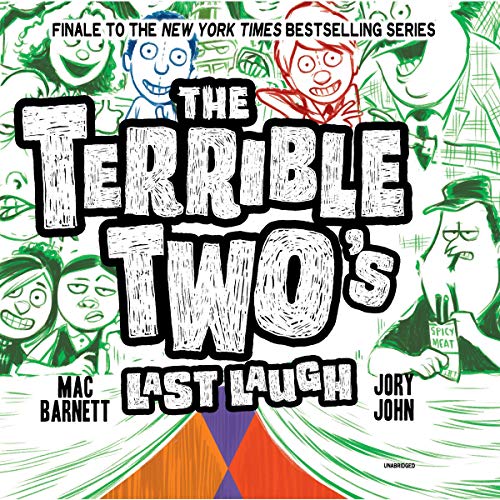 It's Miles' and Niles' final year at Yawnee Valley Science and Letters Academy, and the Terrible Two have one goal: an epic prank. Something big, something brilliant, something that will leave a lasting legacy at their school. It should be easy-peasy for these experts, especially now that their principal has gone from archnemesis to pranking protege.

But their smooth sailing gets downright bumpy when they find out that the new superintendent is none other than Bertrand Barkin, their principal's father...and their sworn enemy. Now that Former Principal Barkin is Acting Superintendent Barkin, he has a first order of business: his long-promised revenge on the Terrible Two.

This rollicking finale to the best-selling series by Mac Barnett and Jory John will settle once and for all who - between quick wits and powerful fists - will have the last laugh.

Enjoy this audiobook free + more
Learn more about Membership
List Price: $17.47
You Save: $2.18 (12%)
By completing your purchase, you agree to Audible’s Conditions Of Use
Sold and delivered by Audible, an Amazon company
Share

4.8 out of 5 stars
4.8 out of 5
420 global ratings
How are ratings calculated?
To calculate the overall star rating and percentage breakdown by star, we don’t use a simple average. Instead, our system considers things like how recent a review is and if the reviewer bought the item on Amazon. It also analyzes reviews to verify trustworthiness.
Top reviews

NanaBecky
5.0 out of 5 stars THE BEST!
Reviewed in the United States on March 12, 2019
Verified Purchase
For several years I've read this series to my grandsons who LOVED them! As I pause and we all MOO together, we enjoy the life lessons Miles and Niles teach us! Because of the pranks, it's ideal if you can read them just before April Fools each year. We have always come up with pranks to do each year as well. From making fake puke to putting vanilla yogurt in a clean glue bottle, we've had a lot of fun without hurting anyone or anything in the process. Just the way pranks should be played. You will LOVE this series!
Read more
2 people found this helpful
Helpful
Report abuse

Mabel
5.0 out of 5 stars Sweet Book
Reviewed in the United States on January 17, 2020
Verified Purchase
This book made me cry a lot. I won’t spoil anything for the people that haven’t read it, so I’ll just say, it’s a very sweet book, and I’m a very sentimental person. I just wish that Mac Barnett and Jory John would write another book please. A fifth addition to the series. Something to give them a happier ending. I don’t know how, because they graduated, but keep both of them in Yawnee Valley. Please. I LOVE these books SO much, and I love the characters, too. (Niles is my favorite.) totally read this book, and totally read the whole series, but just know, you may cry.
Read more
One person found this helpful
Helpful
Report abuse

EH
5.0 out of 5 stars Super funny!
Reviewed in the United States on September 14, 2020
Verified Purchase
The whole family loved reading this series. Not only were the pranks funny and clever, the friendship between Miles and Niles was really tender and wonderful to see portrayed throughout the series.
Read more
Helpful
Report abuse

Jane K.
5.0 out of 5 stars My kid loves this series
Reviewed in the United States on December 20, 2019
Verified Purchase
My 9yo son loves this series. Funny and well written. Hes read all the books.
Read more
Helpful
Report abuse

C
5.0 out of 5 stars the best ever!!!!!!!
Reviewed in the United States on January 22, 2019
Verified Purchase
the only disappointment is that it ends the series. This is the best, most hilarious, most touching book series ever.
Read more
Helpful
Report abuse

Kamal
4.0 out of 5 stars Don't miss the final fun!
Reviewed in India on December 5, 2020
Verified Purchase
Finally, here we have the last book of the series.
I don't think that there is any need to promote or suggest this book to anyone coz if you have already read the previous ones, you must be aware of all the fun and giggles.
Read more
Report abuse

Lidia Nita
5.0 out of 5 stars Great book
Reviewed in Germany on August 5, 2020
Verified Purchase
Excellent book, my son loved the entire series.
Read more
Report abuse
See all reviews
Back to top
Get to Know Us
Make Money with Us
Amazon Payment Products
Let Us Help You
EnglishChoose a language for shopping. United StatesChoose a country/region for shopping.
© 1996-2022, Amazon.com, Inc. or its affiliates