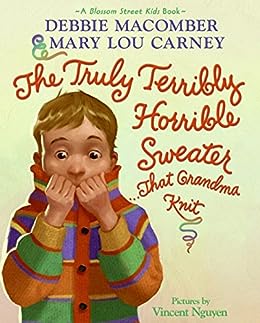 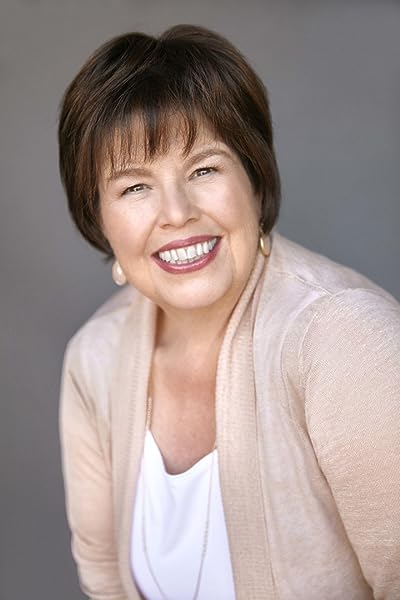 There’s probably not a knitter alive who hasn’t presented a handmade gift and wondered whether the recipient would use it or throw it in the closet. Cameron’s sweater from Grandma Susan gets the closet treatment—and worse. Although he loves his grandmother, her birthday present, a handmade striped sweater, is a huge disappointment. His goal is to get the sweater out of his life via the dog, a rummage sale, and smears of ketchup and mustard. His plans fail though, and he finds himself wearing the sweater when Grandma arrives for a visit. After she tells Cameron why she chose each special color, he begins to understand how much it means to both of them. While, it’s pretty to think so; in real life the sweater would probably go back in the closet. This does, however, make a strong case for “it’s the thought that counts.” Nguyen’s sturdy artwork has some very nice scenes; he cleverly makes the sweater attractive albeit perfectly unacceptable. For those who want to knit the horrible sweater, a pattern is included. Preschool-Grade 1. --Ilene Cooper --This text refers to the hardcover edition.

Debbie Macomber has more than 100 million copies of her books in print, and her stories about home and family have a worldwide audience and have been translated into twenty-three languages. In addition to being a #1 New York Times bestseller in fiction many times over, she also has an enormous following among knitters as the author of dozens of pattern and craft books. In 2008, she launched a branded line of knitting products through Leisure Arts, the company that publishes her knitting guides. Debbie and her husband, Wayne, have four children and nine grandchildren, and split their time between Washington State and Florida. This is Debbie’s second picture book co-authored with Mary Lou Carney; their first, The Truly Terribly Horrible Sweaer . . . That Grandma Knit, was published in 2009.

Mary Lou Carney is the editor of two magazines for young people—Guideposts for Teens and Guideposts for Kids. She is the author of several picture books for the Christian and educational markets, including Bubble Gum & Chalk Dust: Prayers and Poems for Teachers, and Absolutely Angels: Poems for Children and Other Believers (Boyds Mills Press). This is Mary Lou’s second picture book coauthored with Debbie; their first, The Truly Terribly Horrible Sweaer . . . That Grandma Knit, was published in 2009.

Vincent Nguyen is not a knitter, but he is a painter, an illustrator, and an artist for feature films large and small. Originally from Houston, Texas, he moved to New York to attend the School of Visual Arts. He currently lives in New York City, where he works as a concept artist for Blue Sky Studios. He has illustrated several books, but this is his first for HarperCollins.

4.7 out of 5 stars
4.7 out of 5
61 global ratings
How are ratings calculated?
To calculate the overall star rating and percentage breakdown by star, we don’t use a simple average. Instead, our system considers things like how recent a review is and if the reviewer bought the item on Amazon. It also analyzes reviews to verify trustworthiness.
Top reviews

Love the Lake
5.0 out of 5 stars wonderful book for children
Reviewed in the United States on October 13, 2017
Verified Purchase
A touching book about a grandson who didn't want to wear the sweater his grandma knitted for him. However, when his mom made him wear it when his grandma came to visit, and the grandma told him why she chose the colors that she did, the boy realized how much his grandma loved him and how much time and love she put into the sweater. he wore it proudly after that. as a knitter, who knits for my grand children...it was a particularly moving book for me. i read it to my grandsons...ages 6 and 4. they loved it and the 6 year old actually started to fill up with tears, as did i. a beautiful book.
Read more
2 people found this helpful
Helpful
Report abuse

Debb Van Der Upwich
5.0 out of 5 stars The Truly Terribly Horribly Sweater That Grandma Made
Reviewed in the United States on June 4, 2010
Verified Purchase
I originally bought this book as a prize gift for an Ugly Sweater Party I was having for my knitting group. When it arrived I had to read it and fell in love with the book. Although, I have not ordered another one for myself it is on my wish list. I thought it was a cute and funny story for anyone to read that loves to knit and wants to have a good laugh.

Debbie Macomber is one of my favorite authors and I was pleased to see her write a children's book with Ms. Carney. The story is really funny and sets off with Cameron trying to get rid of the sweater that his grandmother had knit him for his birthday. His disappointment in the sweater and the lengths that he goes through to try and hide this "awful" present are hilarious.

I just loved the illustrations and the facial expressions just make you want to laugh out loud! A joyful book for any knitter to share with their grandchildren!

This story will bring a smile to your face and I very much enjoyed it, but I also liked that the actual sweater pattern, and directions of how to knit the sweater, were included in this book, which made it the perfect prize for my party.

It's a story that can be enjoyed by all whether you're a reader or a knitter looking for a chuckle. I am looking forward to more books like this by Debbie Macomber!
Read more
4 people found this helpful
Helpful
Report abuse

Amazon Customer
5.0 out of 5 stars Happy with purchase.
Reviewed in the United States on August 6, 2020
Verified Purchase
Loved this children’s story and look forward to reading it with my grandchildren.
Read more
One person found this helpful
Helpful
Report abuse

Lin Lee
5.0 out of 5 stars The Special Gift
Reviewed in the United States on May 20, 2019
Verified Purchase
Cameron's grandmother knit a sweater for his birthday. He did not like it. When his grandmother came to visit he wears the sweater. A simple story about a special gift.
Read more
One person found this helpful
Helpful
Report abuse

Marjorie. Kaspar
5.0 out of 5 stars So What Happens to the Sweater?
Reviewed in the United States on January 22, 2019
Verified Purchase
Wonderful illustration and great author, Debbie Macomber! Even non readers are pulled into the book.
Read more
One person found this helpful
Helpful
Report abuse

M. Terah Davis
5.0 out of 5 stars Great Book
Reviewed in the United States on August 10, 2010
Verified Purchase
I read this story to my grandbabies and then gave them the sweaters I had knit for them. My granddaughter (age 5) was first to receive her pink sweater, and when I turned to my grandson (age 3) his only remark was to ask "where's mine?". I think the story opened their minds and hearts to the value of a hand knit sweater. Thank you Debbie Macomber!
Read more
3 people found this helpful
Helpful
Report abuse

Paula Baird
5.0 out of 5 stars Horrible Sweater
Reviewed in the United States on March 16, 2016
Verified Purchase
I love Debbie Macomber books and got this for my granddaughters
Read more
Helpful
Report abuse

CHRIS HENNINGS
5.0 out of 5 stars Love it
Reviewed in the United Kingdom on December 18, 2019
Verified Purchase
Love it, my grandsons will enjoy them.
Read more
Report abuse

KnitWit
5.0 out of 5 stars Out of Control Collector
Reviewed in Canada on August 7, 2013
Verified Purchase
I love Debbie Macomber and this book made a great addition to my never ending collection of knitting patterns and knitting stories.
Read more
Report abuse
See all reviews
Back to top
Get to Know Us
Make Money with Us
Amazon Payment Products
Let Us Help You
EnglishChoose a language for shopping. United StatesChoose a country/region for shopping.
© 1996-2021, Amazon.com, Inc. or its affiliates