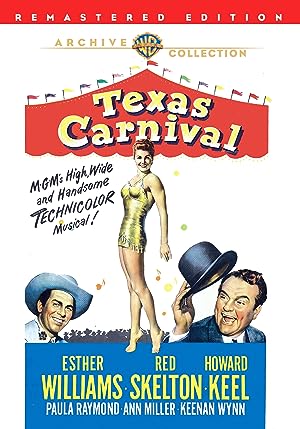 (110)
5.71 h 16 min1951X-Ray7+
Esther Williams dazzles the eye and Red Skelton tickles the funny bone while playing a down-and-out carnival sideshow team mistaken for a pair of multimillionaires at a Texas resort.

George HardyReviewed in the United States on March 27, 2020
5.0 out of 5 stars
A Great Fun Time!
Verified purchase
This is a beautiful color print with great picture and sound starring Esther Williams, Red Skelton, Ann Miller and Howard Keel with a nice supporting cast. It's a musical set in Texas, following on the heels of Annie, Get Your Gun! that also starred Howard Keel the year before. There are quite a few cute and clever jokes about Texas - so get out your notebooks, pardner!

This film features Red Skelton doing a great many well-crafted comic bits throughout. Naturally, Esther Williams is featured swimming, but this time the big number takes place inside the hotel as a dream sequence instead of outside in the pool! It's really remarkable! Ann Miller dances in some rousing tap numbers, choreographed by the great Hermes Pan. Then there's Howard Keel singing throughout with that great voice!

The finale, which involves a race, is quite a bit of fun! I plan on watching it again in the near future.

steve_manassasReviewed in the United States on August 24, 2013
4.0 out of 5 stars
Ann Miller is great, but it's mainly Red Skelton's movie
Verified purchase
I wasn't familiar with this 1951 MGM musical, which stars the late great Esther Williams, Howard Keel, Red Skelton, Keenan Wynn, and the great Ann Miller, who does two tap routines, one (partially) on top of a xylophone with the Red Norvo Trio, and the other in red cowboy boots. As good as Annie is, this is Red Skelton's film. He plays a down-and-out carnival operator who is mistaken for a millionaire. His routines are quite amusing. While I grew up with Red's TV series, I did not know until recently just how prolific his movie career was. Overall, while not an A-list film like [[ASIN:B00006DEF9 Singin' in the Rain (Two-Disc Special Edition)]], this is a solid Western-themed musical, and very entertaining. Songs are written by the odd-couple team of Harry Warren and Dorothy Fields, both of whom usually collaborated with other writers.

Like most Warner Archives releases, the only extra is the trailer.
3 people found this helpful

Kassie J.Reviewed in the United States on November 10, 2019
5.0 out of 5 stars
Adorably corny! A must-buy if you’re a fan of classic comedy...
Verified purchase
I loved this movie! Classic movies are my favorite genre, and this movie didn’t disappoint. It was a cute tale of misunderstandings and goofball screwups. Red Skelton, Esther Williams, Howard Keel, Keenan Wynn...how could it get any better than this??

Nancy R. MiddendorfReviewed in the United States on May 15, 2014
5.0 out of 5 stars
A gem of a movie!
Verified purchase
Red Skelton is so delightfully funny in this movie, especially when he's been drinking with Keenan Wynn. Esther Williams is lovely, and there is a sweet chemistry between her character and Red's. The movie is packed with great lines, a hilarious chuckwagon race, fun songs, and tons of laughs. The only problem we had occurred when the movie was first purchased. At that time my Dad only had a regular DVD player, and it refused to play the DVD-R. I could play it on my computer, but the screen was too small for Dad. We tried the movie at a friends on their Blu-Ray player, and it played just fine. So we'll need a Blu-Ray ourselves, but then we probably needed to update anyway!
2 people found this helpful

Amazon CustomerReviewed in the United States on April 12, 2013
5.0 out of 5 stars
Great Fun! Great Entertainment!
Verified purchase
This movie won't disappoint you. Lots of laughs with the superb Red Skelton, the music is great with Howard Keel's tremendous voice, and Ann Miller dances up a storm. Not to mention the beautiful Esther Williams who was really a fine actress as well. This is a gem for the whole family.
3 people found this helpful

bookieReviewed in the United States on February 6, 2013
4.0 out of 5 stars
Finally out on DVD
Verified purchase
This movie had a good story line and a great cast. I loved when Red Skelton kept getting his spurs stuck together. The songs were great and Ann Miller can certainly dance. My only disappointment was not getting to see Howard Keel as much as I would have liked. The product arrived on time and in perfect condition.
2 people found this helpful

Robert M. BarteckiReviewed in the United States on September 20, 2018
5.0 out of 5 stars
These remastered movies look almost like they were just produced.
Verified purchase
I loved everything about this movie. They just don't make them like this any more.
See all reviews
Back to top
Get to Know Us
Make Money with Us
Amazon Payment Products
Let Us Help You
EnglishChoose a language for shopping. United StatesChoose a country/region for shopping.
© 1996-2021, Amazon.com, Inc. or its affiliates