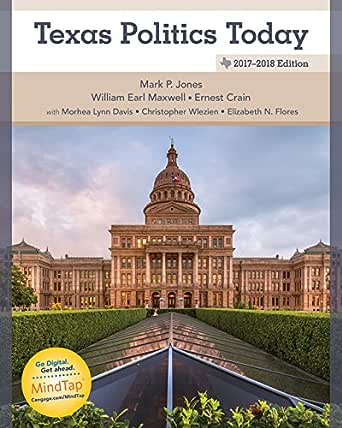 Flip to back Flip to front
Audible Sample Playing... Paused   You are listening to a sample of the Audible narration for this Kindle book.
Learn more
ISBN-13: 978-1305952188
ISBN-10: 1305952189
Why is ISBN important?
ISBN
This bar-code number lets you verify that you're getting exactly the right version or edition of a book. The 13-digit and 10-digit formats both work.

This product is included in a Cengage Unlimited subscription

"I'm surprised at how much I liked it. It seemed to be a little bit more 'in your face' about Texas in the real world than I anticipated. The essays are terrific."

"Very nicely done. This book does a better job of the above than most other texts I have looked at."

"I like the approach of this book and the MindTap!" --This text refers to an out of print or unavailable edition of this title.

Mark P. Jones is the James A. Baker III Institute for Public Policy's Fellow in Political Science, the Joseph D. Jamail Chair in Latin American Studies and a professor in the political science department at Rice University as well as a senior research fellow at the University of Houston's Hobby School of Public Affairs. His articles have appeared in publications such as the AMERICAN JOURNAL OF POLITICAL SCIENCE, the JOURNAL OF POLITICS, LEGISLATIVE STUDIES QUARTERLY, TEXAS MONTHLY, THE HILL and the TEXAS TRIBUNE. Jones is among the most quoted commentators on Texas politics in state and national media, and his research on the Texas Legislature and on public opinion and elections in Texas is widely cited by media outlets and political campaigns. He received his B.A. from Tulane University and his Ph.D. from the University of Michigan.

William Earl Maxwell is a professor emeritus at San Antonio College, where he has taught courses in U.S. and Texas government since 1971. Throughout his career Maxwell has focused on innovative teaching techniques and improving the teaching and learning environments for students. As part of that effort, in 1975 Maxwell co-authored UNDERSTANDING TEXAS POLITICS, his first text on Texas government. He also co-authored such texts as POLITICS IN TEXAS and THE CHALLENGE OF TEXAS POLITICS: TEXT WITH READINGS. He completed his undergraduate and graduate work at Sam Houston State University.

Ernest Crain did his graduate work at the University of Texas at Austin, spent 35 years teaching Texas government at San Antonio College and now lives in Montgomery County, Texas. He has co-authored UNDERSTANDING TEXAS POLITICS, POLITICS IN TEXAS: AN INTRODUCTION TO TEXAS POLITICS, THE CHALLENGE OF TEXAS POLITICS: TEXT WITH READINGS and AMERICAN GOVERNMENT AND POLITICS TODAY: TEXAS EDITION. His special areas of interest include party competition, comparative state politics and Texas public policy.

M. Lynn Davis is a professor of government at El Paso Community College, where she has served as Blackboard trainer and mentor, faculty senator, government discipline coordinator and on numerous faculty committees. A grant writer and a very active community volunteer, she has consulted for and participated in many political campaigns. Her published articles range in topics from the current political environment to the viability of primaries and caucuses in today's election processes. Davis has a Master of Arts from the University of Texas at El Paso, majoring in both organizational behavior and political science.

Christopher Wlezien is Hogg Professor of Government at the University of Texas at Austin. He previously taught at Oxford University, the University of Houston and Temple University, after receiving his Ph.D. from the University of Iowa in 1989. Over the years, Wlezien has published widely on elections, public opinion and public policy. His books include DEGREES OF DEMOCRACY, WHO GETS REPRESENTED? and THE TIMELINE OF PRESIDENTIAL ELECTIONS. In addition to founding a journal, he has served on numerous editorial boards, established different institutes, advised governments and other organizations, held visiting positions at many universities around the world, received various research grants and won a number of awards for his research and teaching. --This text refers to an out of print or unavailable edition of this title.

4.4 out of 5 stars
4.4 out of 5
109 global ratings
How are ratings calculated?
To calculate the overall star rating and percentage breakdown by star, we don’t use a simple average. Instead, our system considers things like how recent a review is and if the reviewer bought the item on Amazon. It also analyzes reviews to verify trustworthiness.
Top reviews

Frostwoman
2.0 out of 5 stars Heavy dark purple highlighters should never be used
Reviewed in the United States on March 26, 2019
Verified Purchase
Most of the book is HEAVILY highlighted and every other chapter in the beginning seems to have heavy dark purple marker used in the book. I seriously need to pass this class but the dark purple marker is making reading really tough.
Read more
Helpful
Report abuse

Maris
4.0 out of 5 stars Expensive
Reviewed in the United States on May 20, 2019
Verified Purchase
This pdf book was a lot of money for just being a rental, but it was the cheapest I could find and it did the job to help me out in school. I used this book in the MacBook pro with the kindle app and never had a problem with it other than the price haha. (So if you need it for school get it, but please make sure you actually need it so you don't just spend your money)
Read more
Helpful
Report abuse

Paul Griffiths
3.0 out of 5 stars Ok
Reviewed in the United States on August 22, 2020
Verified Purchase
Got me through my class
Read more
Helpful
Report abuse

Hisporean
5.0 out of 5 stars Brand new not used
Reviewed in the United States on January 2, 2019
Verified Purchase
Rented and it was brand new
Read more
Helpful
Report abuse