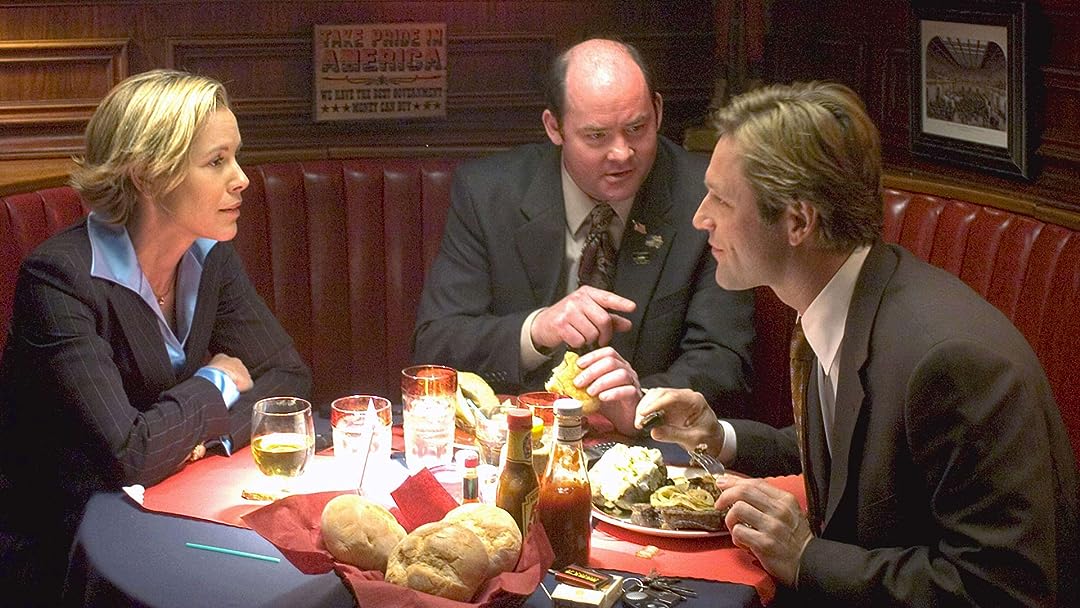 Thank You For Smoking

(1,627)
7.41 h 32 min2014X-RayR
Politically incorrect Nick Naylor is a tobacco lobbyist responsible for marketing smoking to the public - while also trying to be a role model for his 12-year-old son.

joel wingReviewed in the United States on August 11, 2020
4.0 out of 5 stars
Lesson in PR & lobbying as much as how the cigarette industry tried to stay out of trouble
Verified purchase
Thank You For Smoking is about how the cigarette industry tried to deny that it was responsible for cancer. It focuses upon one of its main spokesmen Nick Naylor (Aaron Eckhart) who works for the Academy of Tobacco Studies. He specialized in spin. For instance in the opening he claimed that the cancer researchers were profiting from the deaths of people, while the cigarette industry was most interested in the health of America’s children and was starting a multi-million campaign to convince people not to smoke. He could walk into any situation and twist things around and turn the tables on them. It’s obviously an ironic black comedy.

An example of the cynicism and comedy of the film is when Naylor gets in an argument with two of his best friends who are lobbyists for the alcohol and gun industry. He tells them that cigarettes are way worse than they are given how many people die from smoking a year compared to their products. Another time he gets kidnapped and covered in nicotine patches to get back at his work.

The movie focuses upon how far Naylor can push the industry given his gift for gab. Will it ever catch up to him? Does he feel any guilt?

It turns out to be a lesson in public relations and lobbying as much as about the lengths to which the cigarette industry tried to stay out of trouble.
C

CReviewed in the United States on January 12, 2021
5.0 out of 5 stars
Underrated Gem
Verified purchase
Political comedies often fall flat in the years after their release, and especially since the Trump era the genre has been a wasteland, but this one is a rare gem. The first time I saw this, I was a bit young. Just getting into politics, it wasn't the kind of movie I'd typically have bothered with. Ended up checking it out off a glowing review, and upon revisiting it years later it's fascinating how much it formed my political outlook at the time. Rewatching as a proper adult, so much more of the humor shines through. None of it is particularly groundbreaking insight, but it's solid comedy just based on the irony of what is there right in front of us. At once it lets you feel nostalgic for the way politics used to be, the almost-simplicity of it's corruption and amorality, and reminds you that politics was never good. Especially with how open the joke is of American politics these days, it's almost like a knowing nudge at the future in retrospect.

Meta-appreciation aside, the movie itself is a lot of fun. The gags are all pretty highbrow, the political jabs are at the system, not partisanship, so it holds up well even as the nicotine industry has moved onto brighter pastures with vaping. For antiheroes, they even do a decent job of representing some of the genuine issues from the side of the lobbyists, if a bit tongue in cheek with the delivery. The story is compelling, but it never loses the levity of the concept. It's a strange movie to be what it is and still be watchable all these years later, but it works. Perfectly cast, fun, but not stupid. Movies like it are few and far between.
4 people found this helpful

Shusaku EndoReviewed in the United States on February 21, 2016
5.0 out of 5 stars
More like reality TV, recommend watching but read my review first!
Verified purchase
If you've ever wondered about a "day in the life" of a lobbyist and what they do for a living - great movie. I'm in government affairs, and this pretty much has been my career trajectory, down to the starting my own consulting firm. My friends ask me if this is tongue-in-cheek, and my response is its more close to reality than absurdity. One of the characters in the movie was fashioned after a woman I replaced - so hits very close to home.

I've compared notes with my colleagues in the business, and we've all seen it and laugh.

Is it right for you? Depends on your sense of humor and what you like in movies. If you like watching the Colbert Report and the Daily Show with Jon Stewart, there is a high probability that you will enjoy this movie.
24 people found this helpful

Joan JansenReviewed in the United States on October 15, 2019
3.0 out of 5 stars
Funny, but dishonest.
Verified purchase
Time and time again, they avoid and deceive about the addictive nature of cigarette smoking and concentrate on the only chemical element that isn't generally harmful to health unless it is used in very large doses, nicotine. There are well over 4000 chemicals in cigarettes and it is primarily the combustion that is harmful. The fact that tobacco is a MAOI compound which is an anti depressant is never mentioned anywhere. Big pharma and the AMA and all the states and agencies that get funding from the 1998 tobacco settlement would make big tobacco look like absolute saints.
6 people found this helpful

AJWReviewed in the United States on December 23, 2017
5.0 out of 5 stars
Relax and have a smoke!
Verified purchase
This movie is one of my favorite comedies. That's what kind of movie I consider it - straight-forward logic mixed with great humor and dialogue. Excellent cast as well. This movie is drenched with sarcasm from front to finish and I love it. As an on and off smoker for many years I have to give credit where credit is due and facts are facts about big tobacco. One thing that amuses me most is that nobody smokes in the entire film (besides the colonel holding a cigar), I find this very clever ;-)
12 people found this helpful

Torin McFarlandReviewed in the United States on October 3, 2021
3.0 out of 5 stars
Funny, Uncomfortable, Aging eh
Verified purchase
Aaron Eckhardt is charming and funny in his role as lead public relations for the tobacco industry. In 2006, this was probably reasonably funny, and today it can still get a few laughs. The plot shows how smooth talking can get you far, but still lose you many of the things you love (family, friends, your life). Further, as smoking continues to kill, and the tobacco industry evolves into the vaping / smokeless / e-cig realms, finding new ways to kill people, the film loses most the lightheartedness it once may have had. Irreverence can be funny, but here...I'm not sure it really works anymore.

Annie Van AukenReviewed in the United States on June 25, 2010
4.0 out of 5 stars
Nick Naylor: "Michael Jordan plays ball. Charles Manson kills people. I talk."
Verified purchase
When he's not publicly advocating for the tobacco industry (a seemingly daunting task), lobbyist Nick Naylor (Eckhart) hangs at a D.C. tavern booth with two fellow "merchants of death," a firearms tout (Koechner) and alcohol spokeswoman (Bello). Friendly but competitive chats of this "M.O.D. Squad" often entail how many die annually from products they espouse, the point being: the more dangerous the product, the more lofty its spokesman's mission.

Nick is fearless in his defense of Big Tobacco. On panel shows, he runs smoke rings around cancer patients, scientific studies and experts who declare that cigarettes are deadly. When tasked with increasing movie product placement to supplement his employers' new "smoking is cool" campaign, Nick takes his adoring 12-year-old son (Bright) along so he can watch daddy in action.

Eventually, Big T's front man grows a conscience, albeit not a fully developed one. He grudgingly admits to the hazards of smoking but hedges by falling back on the right of ADULTS to choose and the personal responsibility this entails. The correct message is sent when a horrified Nick instinctively knocks a lit ciggie from his boy's mouth during an impromptu press conference.

Of special note are Robert Duvall's amusing caricature of a tobacco company CEO, William H. Macy's virulently anti-smoking senator from Vermont, Rob Lowe as a kimono-clad Hollywood producer and Sam Elliott's cancer-stricken yet mercenary Marlboro Man. Snickering laughs and intelligent dialogue are plentiful in this well-paced film. It's a satire that skillfully walks a fine line, ultimately providing satisfaction to those on both sides of this hot button issue.

AndrewReviewed in the United States on April 9, 2006
5.0 out of 5 stars
Thank You For Making This Movie
Verified purchase
Lobbyists; it is their job to defend the "defenseless" big corporations that people hate. Tobacco companies, gun manufacturers, alcohol producers and distributors, fast food chains. All of these businesses are enormous and often villified (often times for good reason). The lobbyists' job is to spin the facts into positive arguments for their employers or to make the opposition look bad. Nick Naylor (Aaron Eckhart) is one such lobbyist, and he sure is good at it.

Thank You For Smoking is narrated by Naylor, who refers to himself as a coked-up version of "that guy who could pick up any girl at a party". Talking is what he's good at, and it seems to be the greatest job imaginable. He didn't need an advanced degree to get his job, and yet he makes a considerable amount of money defending Big Tobacco from health organizations and the US government. Naylor's boss is known simply as B.R. (J.K. Simmons), a tough-as-nails Vietnam veteran who gets results from his constant insults to his employees. Nick is divorced from his wife (Kim Dickens) who is sick and tired of him always sweet-talking her, and, in a bit of irony, is now seeing a doctor. Nick's son Joey (Cameron Bright), an impressionable young boy, begins to take an interest in his father's work, and shows that he may have inhereted his father's flair for persuasion. Every week, Nick meets up with his two friends who are also lobbyists. Polly Bailey (Maria Bello) and Bobby Jay Bliss (David Koechner) work for the alcohol and gun lobbies, respectively. Their conversations tend to focus on whose product kills the most people and the best ways to get around negative press. The thing about Nick is that he knows that he's BSing people, but he needs to pay the mortgage somehow.

The great thing about this movie is its shameless satire. No one is safe; yeah, the tobacco company has a lot of shots taken at it, but it also skewers the government, Hollywood, and reporters. Vermont Senator Ortolan Finistirre (William H. Macy) is made a fool of numerous times, and Naylor's "cheese defense" is priceless. What's even more amazing about the film is that, due to the way he spins things, many of Nick's arguments for cigarettes really work (the car/airplane one he uses right before the cheese one don't work in my opinion though, but most of the others actually do, which is pretty scary).

It's a shame that this movie is only getting a fairly limited release, which means that not a lot of people will see it. I think that this is a movie that everyone should see at least once. Don't get me wrong, it isn't so that people can learn from it, because it definitely does not preach, but because it's such a great satire.
2 people found this helpful
See all reviews
Back to top
Get to Know Us
Make Money with Us
Amazon Payment Products
Let Us Help You
EnglishChoose a language for shopping. United StatesChoose a country/region for shopping.
© 1996-2022, Amazon.com, Inc. or its affiliates