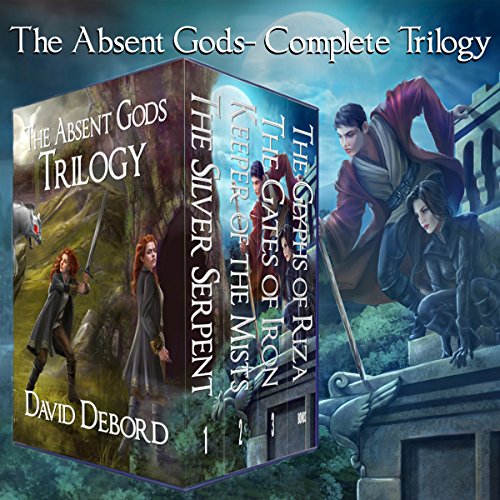 Centuries ago, the land of Gameryah was saved from the forces of the Ice King by the Silver Serpent. Now the frost marches again and three young villagers set off on a perilous quest to recover the legendary weapon. Join Shanis Malan, a rebellious young woman, Oskar Klehn, a bookish misfit, and Hierm Van Derin, an outcast second son, in a classic fantasy in the tradition of David Eddings and Robert Jordan, filled with magic, intrigue, and adventure!

The frost creeps again. Taught the sword from childhood, Shanis Malan's only dream is to be a soldier, but a woman cannot join the Galdoran army. She thinks her dream has come true when Prince Lerryn hosts a tournament in her town, but tragedy drives her and her friends from their home and sends them on a quest for a legendary artifact that can save the world from the minions of the Ice King. Join Shanis and her friends on a perilous search for the Silver Serpent.

Keeper of the Mists

Evil rises. Destiny, or perhaps mere chance, has chosen Shanis Malan to be the bearer of the Silver Serpent, the one prophesied to bring an end to years of clan war. But as Shanis seeks to fulfill her destiny, a pretender rises in the east and enemies invade her homeland. Will she choose the path that leads her back to the place she loves, or will she accept her fate and face the Keeper of the Mists? David Debord's memorable series continues in book two of The Absent Gods!

The Gates of Iron

The Frostmarch has come! Shanis Malan must unite her broken nation and unlock the secret of the Silver Serpent. With Galdora at war, Larris must unravel a conspiracy that threatens his nation from the inside. Oskar enters the order of saikurs, but does the secret to victory over the Ice King lie hidden behind the Gates of Iron? Powerful forces collide and secrets are revealed in the thrilling conclusion to The Absent Gods!

Your audiobook is waiting!
Learn more about membership
List Price: $26.05
You Save: $0.10 (0%)
By completing your purchase, you agree to Audible’s Conditions Of Use
Sold and delivered by Audible, an Amazon company

Mr Pretty
4.0 out of 5 stars Solid...fans of Rothfuss or Robin Hobb may find this a decent read between books.
Reviewed in the United States 🇺🇸 on August 12, 2015
Verified Purchase
Does not stack up to Sanderson, Abercrombie, Staveley, or some of my other favorites but overall is an entertaining read between other book releases. It is a bit softer, not as gritty as my normal reads.

Similar to Rothfuss as for pace; a bit too lengthy but just engaging enough to keep you reading. The author's standalone "The Impostor Prince" was better; but this adds context to that read. 3.5 stars would be more accurate.
Read more
10 people found this helpful
Helpful
Report abuse

Marjorie W.
5.0 out of 5 stars Hated for this series to end
Reviewed in the United States 🇺🇸 on September 15, 2016
Verified Purchase
Hated for this series to end. Would like to know more about what happens after this adventure. Hope Mr DeBord writes more. I read the three stories straight through and did not read anything else until it was done. Only other ones I have done like that are Tolkien and the first three of the Shannara series.
Read more
One person found this helpful
Helpful
Report abuse

saul_2110
3.0 out of 5 stars Good with some glitches
Reviewed in the United States 🇺🇸 on July 31, 2015
Verified Purchase
It's a good epic/fantasy reading. I liked the plot, the characters and the world (and mithology) the author created. I gave it three stars because it contains some sexual comments and implications that (I believe) were unneccesary for the story and more towards fitting with our own society's sexual trend (sex sells and is present everywhere). Also there were some typos and even a confusion of characters in a certain scene.
Read more
12 people found this helpful
Helpful
Report abuse

Cookie
5.0 out of 5 stars The absent God's trilogy
Reviewed in the United States 🇺🇸 on August 21, 2018
Verified Purchase
I really enjoyed this set of books. The characters were interesting and lovable. There must be some more tales of them in their future. Hopefully the writer will write something.
Read more
One person found this helpful
Helpful
Report abuse

PapaTrain
5.0 out of 5 stars 8 lost Gods
Reviewed in the United States 🇺🇸 on July 19, 2016
Verified Purchase
Interesting trilogy, lots of action , well written characters., well thought out landscape. I like everything about these stories even the fact of losing those I grow to like, oh well not everyone can survive a war.
Read more
2 people found this helpful
Helpful
Report abuse
See all reviews

Colin
5.0 out of 5 stars A bargain for lovers of sword and scorcery books
Reviewed in the United Kingdom 🇬🇧 on September 9, 2016
Verified Purchase
I don't know what the previous reviewer was reading or their mood at the time but this book is a much better read than a 2 star. The story has good content twists and builds interest at a good rate. I am only part way in and nearly didnt buy because of the bad review but for 99p its an absolute bargain and scant reward to the author for such obvious passion.
Read more
4 people found this helpful
Report abuse

Neil Goodwin
4.0 out of 5 stars Something to rival Feist and Eddings?
Reviewed in Australia 🇦🇺 on June 4, 2019
Verified Purchase
I have struggled to find an enjoyable fantasy since reading Feist, Eddings and Wurtz years ago. "The Absent Gods Trilogy" came close - not quite there though. Overall an easy, rambling read without too much resistance coming from the lead characters regarding their inherent abilities (I am so tired of hero/heroines not accepting their "destiny" and wasting page after page on their subsequent resistance). If you enjoyed Feist and Eddings you should enjoy this.
Read more
Report abuse

ladyblue
4.0 out of 5 stars Lots of fun
Reviewed in Canada 🇨🇦 on August 18, 2016
Verified Purchase
A decent read. Lots of fun. Started to get a little long. Could have done it in two books.
Read more
Report abuse