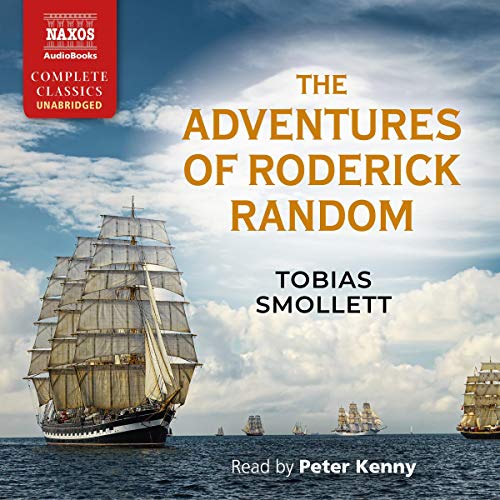 The Adventures of Roderick Random

Tobias Smollett, in his creation of the Scot Roderick Random, exposes the sheer incompetence and injustice of the Royal Navy, as well as the snobbery and hypocrisy prevalent in English middle-class society at the time. Set in the mid-18th century, this picaresque novel follows the life and adventures of Roderick, the eponymous hero who has been shunned by his gentleman father's family on the basis of the lowliness of his mother's family. Expelled from school, Roderick falls back on his natural wit and the support of his maternal uncle. Embarking on a global voyage, hindered by his naivete and with only a few friends to help him, he pursues the rich ladies of the world in order to rise into the high society from which he was rudely ejected. He ends up twice serving on British ships, latterly a warship onto which he is press-ganged. Where will his travels take him?

Enjoy a free audiobook + more
Learn more about Membership
List Price: $23.10
You Save: $2.89 (13%)
By completing your purchase, you agree to Audible’s Conditions Of Use
Sold and delivered by Audible, an Amazon company
Share

4.0 out of 5 stars
4 out of 5
49 global ratings
How are ratings calculated?
To calculate the overall star rating and percentage breakdown by star, we don’t use a simple average. Instead, our system considers things like how recent a review is and if the reviewer bought the item on Amazon. It also analyzes reviews to verify trustworthiness.
Top reviews

Reader in the Pacific
4.0 out of 5 stars A picaresque romp
Reviewed in the United States on October 15, 2019
Verified Purchase
Years and years ago, I had read much of the corpus of English novels of this genre; Moll Flanders, Joseph Andrews, Barry Lyndon, Tom Jones, etc. However I only came to Smollett through his history of England, a not very exciting book.
Roderick Random is a rollicking tale of a bounder who believe he should be owed the estate of a gentleman. A vain glorious young man who is hoodwinked at very turn. As he says.... stupefied as I was ....I curse my simplicity.
Read more
Helpful
Report abuse

Sean McCoy
5.0 out of 5 stars Great and seemingly realistic descriptions of duels and street fighting with cudgels, hangers and small swords
Reviewed in the United States on March 21, 2015
Verified Purchase
I read this a few months ago and have forgotten how prevalent the typos were, so they were probably average for these free editions and didn't obstruct being able to smoothly read and enjoy this book. The book itself is a straight up picaresque tale of a lad from somewhat humble beginnings making his way in a wicked world. Of particular interest to me were the seemingly realistic and gritty descriptions of dueling and otherwise fighting with the self defense weapons of the day - cudgel, hanger, small sword and pistol. Smollett was a veteran of the War of Jenkin's Ear and involved in one of the largest naval invasions in history, the attack on Cartagena, Colombia. He places Roderick in that invasion and thus gives a description of it from his personal experience. This is a great English novel, even more so for those who appreciate an author with mastery and command of the language.
Read more
2 people found this helpful
Helpful
Report abuse

Daniel Myers
4.0 out of 5 stars Roistering Roderick
Reviewed in the United States on October 1, 2003
Verified Purchase
This book is a great deal of fun to read. It is lively, witty and amusing, as well as strikingly modern in displaying the vicissitudes of fortune in the character Roderick. These vagaries of fortune, from penury, to wealth, from imprisonment, to landed gent are also reflected in the vagaries in the moods virtues (or lack thereof) in our title character, thus lending Roderick, for most of the book, a three-dimensional aspect and not simply another cardboard cutout for an 18th century picaresque.-But the book does have its faults, particularly as we draw to what we foresee will be the inevitable end. It's just too pat for many modern readers to swallow. Or at least it is for this one. The Oxford edition's notes, while helpful in places, especially with nautical turns of phrase, and for those with a scholarly interest in the location of certain streets in the London in Smollet's day etc tend to become rather annoying at times, almost to the point of insulting the well-read reader's intelligence. Many times I found myself saying, "As if I could not have figured that out on my own from the context!" The book, not surprisingly, is at its best when it is at its most autobiographical and descriptive, particularly the passages of Roderick's first sea voyage. One of my favourite passages that illustrates the lively vitality and humour of both the character and the work comes when Roderick, feared to be dying of typhoid fever, is visited by a priest to make a last confession:
""Without doubt, you have been guilty of numberless transgressions, to which youth is subject, as swearing, drunkenness, whoredom, and adultery; tell me therefore, without reserve, the particulars of each, especially the last, that I may be acquainted with the true state of your conscience...."
Roderick, a thoroughgoing, Scottish Ant-Papist will have none of it and soon recovers.
I am reminded of Joseph Conrad's short story "Youth" which I recommend to all who enjoy this book. - But, in the end, Conrad's story is the philosophically deeper and more true-to-life narrative than this one.-Again, the ending, for this reader, was just too pat and soppy. I am not trying to be a "spoiler" here and ruin the reading of the book and imperiling this review, by telling you potential readers what it is. You don't need me for that. You will have figured it out about a hundred pages before the end. And, for the record, I believe that this misguided idea of not being able to include the reviewer's analysis of a book's ending seriously handicaps the reviewer as well as insults the reader's intelligence. ---But, I have to abide by the rules in order that this review be posted. So be it.
Anyway, a delightful 18th century romp, until the predictable winding down.
Read more
24 people found this helpful
Helpful
Report abuse

JD
5.0 out of 5 stars A good story made hilarious by Smollett's wonderful wordsmanship!
Reviewed in the United States on December 28, 2016
Verified Purchase
This has never been out of print and I can see why. Smollett uses the English language to perfectly capture human nature. I was smiling constantly, waiting for the next word explosion, often making hilarious the most serious or matter-of-fact situation.
Read more
Helpful
Report abuse

Avid reader
5.0 out of 5 stars Exquisite
Reviewed in the United States on June 30, 2015
Verified Purchase
The language being exalted it can come off as a bit dense. However if you have the patience to complete this narrative (starting crucially with the important preface) your profit will more than reconcile the time invested.
Read more
Helpful
Report abuse

Johann
5.0 out of 5 stars Five Stars
Reviewed in the United States on May 16, 2016
Verified Purchase
A+
Read more
Helpful
Report abuse
See all reviews

1001obsessive
5.0 out of 5 stars All the nice girls love a sailor
Reviewed in the United Kingdom on March 7, 2019
Verified Purchase
This novel follows the quixotic Roderick Random and is full of amusing twists and turns, including a scathing insight into the harsh realities of British Naval life in the eighteenth century. The humour is a little, well, basic, but this story romps along quite happily. A very enjoyable read and my personal Smollett favourite.
Read more
Report abuse

M. Dowden
4.0 out of 5 stars A Good Yarn
Reviewed in the United Kingdom on April 11, 2010
Verified Purchase
This was Tobias Smollett's first novel, and was quite successful at the time of its publication. Unfortunately Smollett fell out of favour in Victorian times as he was considered a bit vulgar as he portrayed what was considered as low toilet humour.

This tale follows Roderick Random from his birth onwards. Born in Scotland his father was disinherited for marrying his mother. His mother dies shortly after his birth and his father disappears leaving him to be brought up by his grandfather. Abused at school, and having to make his own way in the world Roderick travels to London with a friend. Using his own experiences Smollett weaves a good story that is semi-autobiographical in parts. Meeting a multitude of people on his travels Random eventually joins the Royal Navy as a surgeon's mate. Smollett drew heavily on his own experiences to portray life as it was then in the navy, and in the battle that was fought that was part of that little known war, 'The War of Jenkin's Ear'.

After leaving the navy Random joins the French Army before coming into contact with his friend again. Setting himself up as a gentleman Random then tries to be a fortune hunter, looking for a rich wife to live off. Random finds friends, people who sponge off him, outright cads and a number of other people that bring this tale to life. Some complain that his female characters are one dimensional, but Smollett was writing for a predominately male audience, and they are there really as foils to the story.

With some great humour, including toilet humour, along with biting satire, especially how the navy and government worked in those days this book has a lot to offer anyone interested in the literautre of the 18th century, as well as what the world was like in those days.
Read more
8 people found this helpful
Report abuse

Timothy Stedham
4.0 out of 5 stars Time well spent.
Reviewed in the United Kingdom on April 15, 2020
Verified Purchase
A well written book with enough distractions to keep your interest. These old books should have the paragraphs better placed.
Read more
Report abuse

Avid reader
1.0 out of 5 stars Faulty print and poorly produced book - unable to read it
Reviewed in the United Kingdom on June 15, 2015
Verified Purchase
Poorly produced book - text/print was missing from the top line of every page - font was very small and the line spacing so minimal that it would have made it a physically demanding read. Applied and got a refund for it.
Read more
Report abuse
See all reviews
Back to top
Get to Know Us
Make Money with Us
Amazon Payment Products
Let Us Help You
EnglishChoose a language for shopping. United StatesChoose a country/region for shopping.
© 1996-2022, Amazon.com, Inc. or its affiliates