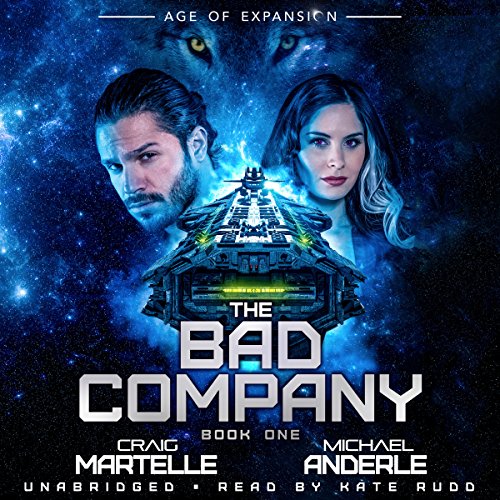 Space is a dangerous place, even for the wary, especially for the unprepared. The aliens have no idea.

Colonel Terry Henry Walton takes his warriors into battle, for a price, in this first installment of The Bad Company. He believes in the moral high ground and is happy getting paid for his role in securing it.

Join them as they fight their way across Tissikinnon Four where none of the warring parties were what they expected.

Inside this book is cursing, amusing cursing, but cursing nonetheless. If bad language offends you, perhaps this book is not for you?

Set on the foundation laid by the Kurtherian Gambit Series, The Bad Company tells an entirely new story in the Age of Expansion - when the Etheric Empire is fast becoming the Etheric Federation with all of the trials and tribulations that come with bringing together different peoples, systems, and ideals.

4.4 out of 5 stars
4.4 out of 5
262 global ratings
How are ratings calculated?
To calculate the overall star rating and percentage breakdown by star, we don’t use a simple average. Instead, our system considers things like how recent a review is and if the reviewer bought the item on Amazon. It also analyzes reviews to verify trustworthiness.
Top reviews

desert wolf
4.0 out of 5 stars Good storyline but too busy.
Reviewed in the United States on November 10, 2017
Verified Purchase
Not bad, but scattershot. Too many characters involved too much. Practically everyone significant in the THW stories is still here. TH, Char, Kae, Marcie, and Joseph all have major battle parts, which is much of the book. Christina's here (as we knew) and she gets a big role. Dokken. Almost forgot the weretigers. Kim, Cory, the other weres, and Petricia all come in.

THEN, there's Ted's story, which IMO could've been handled completely separately...it would've made for a Frank Kurns-like story. And there the ship's crew and situation, and last but NOT least, Nathan and Lance.

Oh, not last. I didn't mention the various and sundry aliens.

Got no problem with the battle description; I think it was done well. The Fog of War issues are on point. I like that the intel was a total snafu, and the battle itself exposed numerous tactical issues. The Empire's almost always been far too competent, except when BA goes off in a tizzy. Things go generally too smoothly; humint is rarely *that* good. A little chaos is a Good Thing.
Read more
6 people found this helpful
Helpful
Report abuse

Weteddie
4.0 out of 5 stars Plans change at first contact.
Reviewed in the United States on October 1, 2018
Verified Purchase
I liked this first book in an evolving story line. There is plenty of shoot-um up action to quell most adrenalin junkies. The use of were creatures such as werewolves, tiger, vampires and enhanced humans is a step outside the box for space opera. Although, there is still the obligatory mech unit I've seen inside other stories it isn't an all powerful weapon. There is also the need to innovate, adapt and overcome as obstacles are placed before our merry band of brothers in a fight for their lives.
With wry humor, salty language, human emotions and determination please read this book, you'll find that its a likable read
Read more
2 people found this helpful
Helpful
Report abuse

Amazon Customer
3.0 out of 5 stars Questions
Reviewed in the United States on November 15, 2017
Verified Purchase
I liked this book. It had a lot of action, and was well thought out.

Now to the main criticism that cost it two stars. I had to start skipping the sections that dealt with the War Axe. It seems that the author never read any of the other Kutherian Gambit series where they discuss the Emperess's space technology. The weapons drop pod uses rockets, not gravitics. The War Axe EI is vastly underpowered. The War Axes sensors are terrible. The transit times do not line up to the other books. Why doesn't the War Axe use it's gravitic shields to stop the mines like the other books?

Also, Christina seems like a pale imitation of herself and her abilities from the main series.
Read more
8 people found this helpful
Helpful
Report abuse

Visaq
2.0 out of 5 stars Great book of you like G.I. Joe and you're 10 years old.
Reviewed in the United States on July 21, 2018
Verified Purchase
Average military sci-fi story, nothing special. Character development needs a lot of work. Story is very hard to follow because it's too fragmented, too choppy. I got tired of trying to make sense of it. There are just way too many unnecessary people and it makes it very hard to integrate all of them into the story. This is an occasion when less is better than more. The author should stop being a smart ass with all the macho military talk and concentrate on telling a great yarn. Unfortunately, this is not one of them in its present form.
Read more
5 people found this helpful
Helpful
Report abuse

M. Kea Smith
5.0 out of 5 stars You have to read this book!
Reviewed in the United States on March 22, 2019
Verified Purchase
I love how TH & the FDG are welcomed into Space & the Etheric Federation! Nathan & Ekaterinas daughter has grown since my last exposure to her in the original series. Having Christina join the FDG? Brilliant!
I have been completely absorbed in TKGU (The Kurthurian Gambit Universe) & I cannot wait to read it all through as the stories just keep getting more polished & exciting. If you haven't started this Universe yet, why not? It's a page-turning thrill a minute, with love of family to keep it all together. Still Fabulous!
Read more
One person found this helpful
Helpful
Report abuse

John G.
5.0 out of 5 stars Bad to the Bone!
Reviewed in the United States on November 13, 2018
Verified Purchase
I got hooked on the Kurtherian Gambit series after reading some of the offshoot series and finally started through the original books almost two years after the first one was published. I have since devoured every related series and this one is one of my favorites. The combination of military sci-fi and fantasy just seems to strike a chord in me, likely because I started out with comic books in the 60's and worked my way through just about every science fiction and fantasy genre ever since. The characters are enjoyable, the mayhem is prolific and there's humor layered throughout every book. The KGU universe books essentially forced me to sign up for Kindle Unlimited, just to avoid spending more than $50 per month on books.
Read more
3 people found this helpful
Helpful
Report abuse

Terrence WalshTop Contributor: Pets
TOP 500 REVIEWER
5.0 out of 5 stars A winner
Reviewed in the United States on October 11, 2018
Verified Purchase
There are people with active imaginations. We love sci-fi, space operas, all that stuff. We love to watch it, or read it.

Then there are people with ridiculous imaginations on hyper-drive, drawing endless energy from the Etheric. Craig Martelle is one such. Loved his End Times Alaska series. Michael Anderle is another. You know, the godfather of the Kurtherian Gambit Universe. It's like the Marvel Cinematic Universe, but huger. Runaway imaginations, squared.

And now we're in space with a cast of many dozens. It is a sign of something when a cast of characters is at the BEGINNING of a book. Actually, thinking of some much-loved books that hid the cast road map in some appendix, I greatly appreciated the placement at the beginning. The descriptions did not all make sense at first--why so much attention to "mechs"??--but all was soon clear.

Here we have an armed force going to war. It's really not a very large army. Every person has a story--and a name. Good. They should. A lot of characters made the jump from Earth to space. I'm glad to see them again. Some fresh characters join the good guys, though most are in supporting roles, something like the Star Trek security guy who just has a first name. Expendable? But war is full of sudden vacancies.

I particularly liked the convoluted misinformation with the Crenellians. Every truth has two falsehoods plus a third lie of omission. Their cold-bloodedness was unnerving. Good writing.

It's great that there is more of this series ready to go. In some ways it's pulp fiction--but that never stopped Sam Spade or Conan (the barbarian, not the late night host). And in other ways it's darn good writing, whether one book comes out every month or every year. Personally I'm glad for the blistering pace.

Gazzmann
5.0 out of 5 stars Brilliant
Reviewed in the United Kingdom on November 10, 2017
Verified Purchase
Loved this book. There are a few mistakes at the very beginning (introduction of characters pages) but are easily dismissed as you get into the story. I'm still in love with the characters and cannot wait for the next book. I do think the author has missed a trick to distinguish these books by not finishing all in the series with a proper after action report in a meeting with all (in the mess room or the hangar?) And funerals of any who pass during the book. It would, in my humble opinion, be a class act to thank the heroes who gave their lives. Just an idea. Cheers!
Read more
Report abuse

Micky Cocker
5.0 out of 5 stars Fantastic as usual
Reviewed in the United Kingdom on November 9, 2017
Verified Purchase
TH and the gang have left earth and are now off on their first mission in space. And what a shit storm they’ve fallen into . Only TH and this awesome crew can get to the bottom of who is in the right and fight to get this planet back in track .
Plenty of action , laughs and even a few tears . This is gonna be a awesomely brilliant series and I’m already itching to see what happens nxt
Read more
One person found this helpful
Report abuse

O.L.D.
5.0 out of 5 stars Cracking bit of mil-fic sci-fi space opera action
Reviewed in the United Kingdom on November 14, 2017
Verified Purchase
I quite enjoyed this one. It pretty much ticks every box of things I like. This is obviously going to be a great series and I'm looking forward to seeing more!
Read more
Report abuse

Kindle Customer
5.0 out of 5 stars Just what I was waiting for
Reviewed in the United Kingdom on November 10, 2017
Verified Purchase
Thank you! This book is fab. I loves it, me! I heartily enjoyed the mayhem and look forward to the next one!
Read more
Report abuse

kevinmac5
5.0 out of 5 stars Five Stars
Reviewed in the United Kingdom on November 11, 2017
Verified Purchase
More tw and char for fans of TKG and Nomad series.
Read more
Report abuse
See all reviews
Back to top
Get to Know Us
Make Money with Us
Amazon Payment Products
Let Us Help You
EnglishChoose a language for shopping. United StatesChoose a country/region for shopping.
© 1996-2022, Amazon.com, Inc. or its affiliates