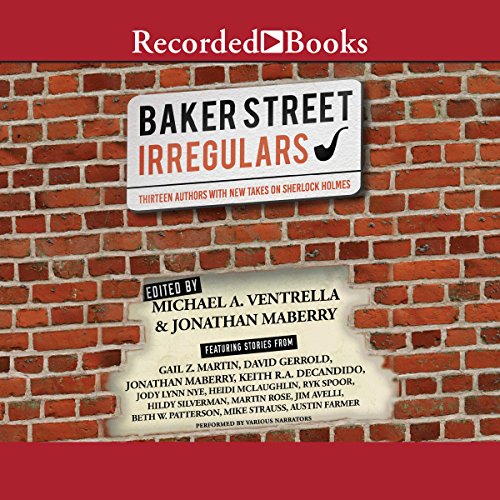 Sherlock Holmes is one of the most iconic and lasting figures in literature. His feats of detection are legendary, and he continues to capture audiences today in stories, movies, and on TV. In this new anthology, The Baker Street Irregulars, authors present the celebrated detective in more than a dozen different, wildly entertaining new ways.

In Ryk Spoor's thrilling "The Adventures of a Reluctant Detective", Sherlock is a re-creation in a holodeck. In Hildy Silverman's mesmerizing "A Scandal in the Bloodline", Sherlock is a vampire. Heidi McLaughlin sends Sherlock back to college, while Beth Patterson, in the charming "Code Cracker", turns him into a parrot.

The settings are as varied as Russia in the near-future, a dystopian world, a reality show, and an orchestra. Without losing the very qualities that make Sherlock so illustrious a character, these authors spin new webs of mystery around their own singular riff on one of literature's truly singular characters.

Your audiobook is waiting!
Learn more about membership
List Price: $27.99
You Save: $4.04 (14%)
By completing your purchase, you agree to Audible’s Conditions Of Use
Sold and delivered by Audible, an Amazon company

Amazon Customer
5.0 out of 5 stars Interesting and well written collection of stories
Reviewed in the United States 🇺🇸 on May 23, 2017
Verified Purchase
I thoroughly enjoyed reading this collection of short stories. Each one has a different, surprising twist on who Holmes and Watson are (the game show host story is one of my favorites; the vampire premise is my least favorite), and that is part of the appeal of the stories. But the stories themselves do not disappoint as an art form in and of themselves. The stories are well crafted in terms of structure, plot arc, character development, prose quality, suspense, and intrigue. There are not annoying typos or sentence errors.

You don't even have to be a die-hard fan of Sherlock Holmes to enjoy these--very little background knowledge is necessary to enjoy the twists in the new tellings because the twists depend on new genres, new settings, new perspectives, and new plots rather than just simple retellings. Anyone who enjoys mystery fiction, anyone who enjoys sci-fi, and especially anyone who enjoys both, will enjoy these stories. I'm definitely glad I spent my money! (I got the Kindle version.)
Read more
7 people found this helpful
Helpful
Report abuse

Ef Deal
4.0 out of 5 stars A Baker's Dozen from Baker Street
Reviewed in the United States 🇺🇸 on April 25, 2017
Verified Purchase
What a lot of fun! If you love Sherlock Holmes, this is a must for your collection. SF/F/H's finest writers pay tribute to the everlasting detective and the eternal spirit of inquiry and analysis wherever he may be found -- New York, LA, the distant future, a revisioned past. Although a bit uneven, given the variety of authors and tales, every one of them presents an infuriating, arrogant, self-absorbed, and -- quite naturally -- brilliant Sherlock. We'd know him anywhere!
Read more
3 people found this helpful
Helpful
Report abuse

Rod B
4.0 out of 5 stars An interesting twist on Sherlock Holmes!
Reviewed in the United States 🇺🇸 on January 28, 2020
Verified Purchase
These alternate takes on Sherlock Holmes were most entertaining. My favorites were the stories by Beth W Patterson and Jody Lynn Nye but all were well done.
Read more
One person found this helpful
Helpful
Report abuse

Erin
4.0 out of 5 stars Not to canon but entertaining
Reviewed in the United States 🇺🇸 on March 9, 2019
Verified Purchase
I'm a huge Holmes and Watson fan and stumbled on this after re-reading the canon at new year. While these are not true to the original at all, they are fascinating and suck you in. I was pleasantly surprised to enjoy pieces of every story and I think I'll be reading this again.
Read more
One person found this helpful
Helpful
Report abuse

V. Hartman DiSanto
5.0 out of 5 stars Don't want it to end
Reviewed in the United States 🇺🇸 on March 30, 2017
Verified Purchase
Sherlock Holmes as a college girl or a transgender female? How about a robot? Modern day or in the past? The range of depictions in this anthology is wide, but in all cases, the characters are recognizable, true to the theme, and very well written. I'd recommend this book for fans of traditional Arthur Conan Doyle mysteries, for fans of sci-fi/fantasy, and especially for fans of both! I still have two stories to read and don't want the book to end. Mr. Ventrella and Mr. Maberry, will there be a Baker Street Irregulars 2?
Read more
4 people found this helpful
Helpful
Report abuse

Bobbyd
3.0 out of 5 stars A bit of a stretch!!!
Reviewed in the United States 🇺🇸 on May 4, 2017
Verified Purchase
While some of these stories were quite good, others, in the search to be "different", border on the bizarre.
If you are interested in seeing just how far the Holmesian genre can be stretched, this might be a decent academic study but with multitude of "B+" grades and a definite handful of "D's" being the net result.
If you enjoy the more established and traditional style, you might want to look elsewhere.
Read more
One person found this helpful
Helpful
Report abuse

D. Walton-blanchard
4.0 out of 5 stars Enjoy!
Reviewed in the United States 🇺🇸 on May 20, 2017
Verified Purchase
There's a tale in this collection to please every Holmes fan! Some are amusing, some esoteric and one that's vampiric.
Enjoy!
Read more
2 people found this helpful
Helpful
Report abuse