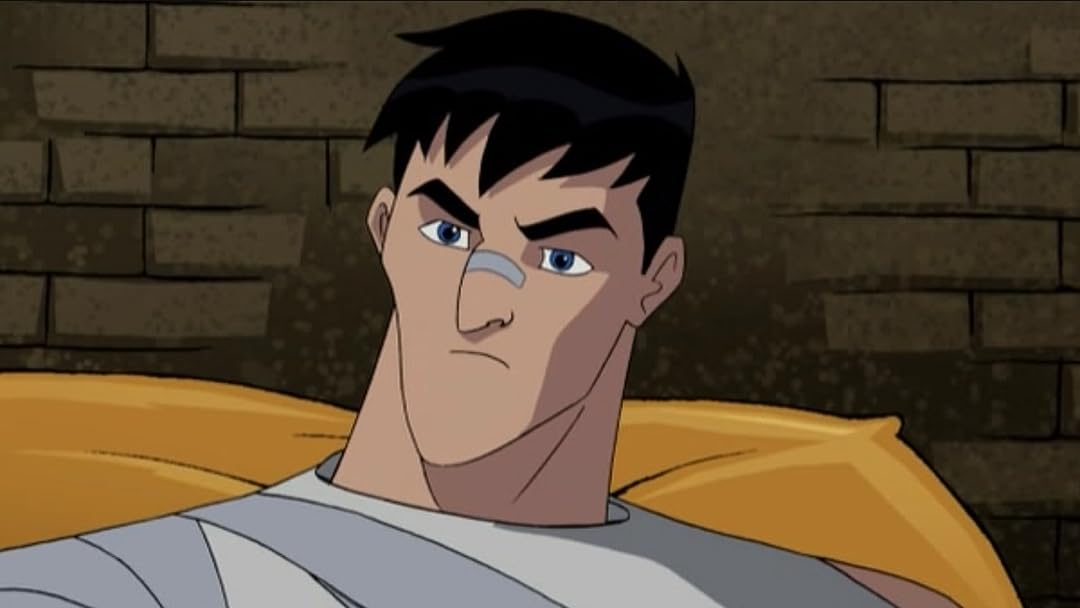 (967)
7.32005TV-Y7
In Gotham City, where shadows run long and deep, lives The Batman. Join the most complex and intriguing character in comic book history for action-packed adventures that test the limits of this legendary character's extraordinary physical prowess and super-sleuthing skills.

Robert E. PetersonReviewed in the United States on April 21, 2018
5.0 out of 5 stars
Violent, quirky but good!
Verified purchase
These episodes are NOT in airing order!!

This stars, well, no one most have ever heard of!! LOL!!! Anyway,
while the main actors are unknowns, this does have some pretty
good actors in it guest starring: the original Batman - Adam West, Ron Perlman
(Hellboy), Robert Englund(Freddy in the Nightmare On Elm Street
movies), Frank Gorshin(The original Riddler), Louis Gossett Jr.
(An Officer And A Gentleman, Roots), Jerry O'Connell(Sliders), Kevin Conroy(The original
animated voice of Batman!), Mark Hamill(Star Wars) & Brooke
Shields(Pretty Baby)!

Gone are Robin, Batgirl & Commissioner Gordon!! And I'm not
impressed by the two cops that hound Batman/Bruce Wayne,
one being a friend of Bruce's, and the other with an apparent
ax to grind!! At least they kept Alfred, although I'm not real
impressed with they way they are representing him here.

Batman has a device that tells him when there's trouble in
Gotham, but no explanation of who's sending him the
messages,

One more thing, I'm not really crazy with the artwork in this!!
It almost looks like it was made for really young children, but
the stories and the violence are not really for the young!!

You may think with all this negativeness that I didn't like the
series. Not true, it's quite enjoyable, and well worth a watch.

And for those which find this important, there is closed captioning! RP

David W. NesbittReviewed in the United States on January 6, 2016
5.0 out of 5 stars
Nearly as good as the Blu-Rays at a much cheaper price!
Verified purchase
This was a Christmas gift for a 5 year boy who loves Batman!

I watched 2 episodes with him and he was bouncing off the walls he was so happy. The picture was nearly as good as the Blu-Rays I've bought for myself. Sound was great as well. And the price INCLUDING S/H was **UNDER** $10. You just can't beat that with a stick!!!!!

His mom has called and thanked us - apparently he watches as least one episode a night after supper. I guess I will have to buy him the rest of the series for his birthday this summer.

I would rate this a very good 8.75 to 9.25 out of 10 - nearly any young child will like this and many older adults (you know who you are!) will have fond memories of this 1960's show!. Highly recommended!!!
10 people found this helpful

jackbReviewed in the United States on April 19, 2014
4.0 out of 5 stars
The BATMAN is more kid friendly than it's predecessor
Verified purchase
The series, "The Batman" is still Batman. A younger Bruce Wayne is fighting crime. This incarnation features many more gadgets (designed for selling toys, no doubt!) and less detective work. Character development is limited as well, except in the case of the detectives. This is a pre-commisioner Gordon Gotham city, and there's no Robin either. While this works, the aim of the show is clearly a little younger demographic than Batman: The Animated Series (or maybe it's the same, we've just lowered our standards..or raised them...).

Now we have to explain.

If it's for kids, and it is, it's surprising that Robin doesn't show up until much later in the series. This means that Batman has to be more kid-friendly, thus there is a lot more action than the dark and gritty Batman of the 90's series.

As far as standards - the story lines suffer in depth. This also a Gotham mostly without guns. In fact, the police force carries around these laser-gun looking things instead of the old revolvers that were okay in the 90's for animated cops to carry around.

Batman has new gadgets, and the villains are sillier in their "crimes" and even worse in their puns.

Still, it's a Batman for a new set of kids and he doesn't disappoint.
2 people found this helpful

Nomad SnakeReviewed in the United States on February 16, 2018
5.0 out of 5 stars
Holy digital video disk, Batman!
Verified purchase
Great show. Used to watch these reruns when I was a kid, now I am showing them to my kids- and they love it! The shows are simple enough for kids to follow and there is no overt objectionable material to worry about. I will say I am catching some of those 1960's innuendos now that I am older. This is a great way to enjoy some of the Batman lore with the family while having some campy fun!
2 people found this helpful

H. MinsonReviewed in the United States on February 27, 2014
5.0 out of 5 stars
A Great Series
Verified purchase
If you love Batman I highly recommend this series. It's a fresh start for Gotham's vigilante, meaning he has no relationship with the police, is still working on his crime fighting skills, and making his name known on the streets. I love this series and have seen it from beginning to finish. It's fairly dark but not so dark it's not kid friendly. The character's have some great depth and back stories. It even goes into the back stories of several of the villains which is nice for those who aren't as familiar with the comic books. I'm sure they're not all 100% accurate but it's always bizarre when you're introduced to a series and no one tells you if anything's different or not.

The story and pacing is a little more intense because Batman is fighting not only the villains but also the cops as they chase him through the streets of Gotham. Great animation and great voice acting. I highly recommend this series!
One person found this helpful

Carlton David WhiteReviewed in the United States on June 26, 2021
5.0 out of 5 stars
What a Joy
Verified purchase
Looks better than cable in 1974! What a trip. I didn't buy the whole series. For all the episodes you get with stock villans, it is a great nostalgic representation/samp!e for the money. I won't binge it. Just nice to touch base and have a slew of throwbacks when the mood might hit

A.J.Reviewed in the United States on July 30, 2020
5.0 out of 5 stars
Great Nostolgia
Verified purchase
I'm a fan of the first two or three seasons of The Batman. I used to watch this on Saturday mornings on WB (CW) when I was a kid. I really liked the show until Robin joined. The show took a different direction and made the show mainly about Robin and Batgirl then Batman was like a supporting character. DVD quality was great. Awesome purchase.
One person found this helpful
See all reviews
Back to top
Get to Know Us
Make Money with Us
Amazon Payment Products
Let Us Help You
EnglishChoose a language for shopping. United StatesChoose a country/region for shopping.
© 1996-2021, Amazon.com, Inc. or its affiliates