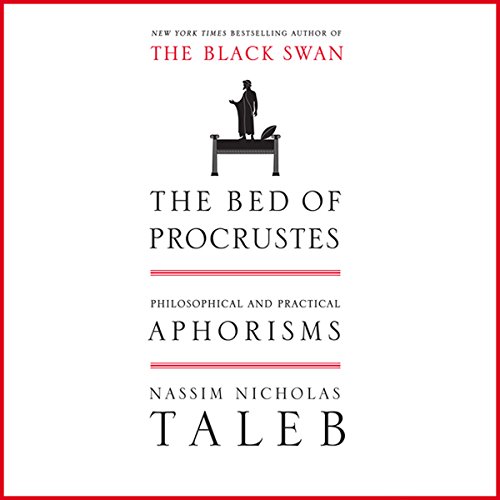 The Bed of Procrustes: Philosophical and Practical Aphorisms

By the author of the modern classic The Black Swan, this collection of aphorisms and meditations expresses his major ideas in ways you least expect.

The Bed of Procrustes takes its title from Greek mythology: the story of a man who made his visitors fit his bed to perfection by either stretching them or cutting their limbs. It represents Nassim Nicholas Taleb’s view of modern civilization’s hubristic side effects - modifying humans to satisfy technology, blaming reality for not fitting economic models, inventing diseases to sell drugs, defining intelligence as what can be tested in a classroom, and convincing people that employment is not slavery.

Playful and irreverent, these aphorisms will surprise you by exposing self-delusions you have been living with but never recognized. With a rare combination of pointed wit and potent wisdom, Taleb plows through human illusions, contrasting the classical values of courage, elegance, and erudition against the modern diseases of nerdiness, philistinism, and phoniness.

Your audiobook is waiting!
Learn more about Membership
List Price: $13.99
You Save: $2.04 (15%)
By completing your purchase, you agree to Audible’s Conditions Of Use
Sold and delivered by Audible, an Amazon company

Orr.Orovan
5.0 out of 5 stars Different but definitely Taleb
Reviewed in the United States on August 13, 2016
Verified Purchase
This book is all aphorisms bunched into chapters by topic. So no one story line or idea to follow as in his other books. At times I played a game trying to read the first part of an aphorism and guess the rest. Never got it. Being Taleb's work they are much cleverer than I am and very thought provoking. Short and enjoyable reading.
Read more
18 people found this helpful
Helpful
Report abuse

Cameron Chase
3.0 out of 5 stars A Random Collection of Aphorisms
Reviewed in the United States on November 29, 2019
Verified Purchase
This is just a collection of random thoughts on various topics, most of which are a sentence or two in length. You could put some of these sayings into fortune cookies and ruin a few social gatherings. Most of the the aphorisms capture the author's disdain or amusement toward three main culprits: Journalists, economists and academics. There are some gems sprinkled throughout the disgruntled musings, but it lacks an overarching thread tying it all together. The structure of the book makes it impossible to dig deeply into the stated topic, namely people who try to retrofit their fragile belief systems to reality, instead of learning from reality like a scientist or a mathematician. This is the weakest of his books, in my opinion. Black Swan changed the way I view the world. This book not so much.
Read more
27 people found this helpful
Helpful
Report abuse

Nick
5.0 out of 5 stars distilled
Reviewed in the United States on January 31, 2019
Verified Purchase
It feels weird to be reading any of Taleb's aphorisms without them being followed by a torrent of comments and chatter as is found on the author's facebook page. A concentrated and distilled version of the author's viewpoints, definitely held up well to multiple readings.
Read more
Helpful
Report abuse

mike
5.0 out of 5 stars Great aphorisms by a great thinker
Reviewed in the United States on March 4, 2011
Verified Purchase
An aphorism is poetry in prose, a single statement of a concept that would fill pages of explanation. A good aphorism causes deep thought, provoking you to determine why you agree or disagree with the concept. This work is full of them and perfect for the Kindle. Hit a page at random. Take a quick look at a short statement. Be thinking for the rest of the day.

Taleb is one of the great, broad thinkers of our day. His focus is on how the conceit of certainty in an uncertain world is deadly in many respects (financially and personally). It is an antidote for those whose success entails exacting certainty about very specific things.

TheWildBoy
VINE VOICE
5.0 out of 5 stars Some great sayings!
Reviewed in the United States on July 1, 2019
Verified Purchase
Anything from Naseem is gold, I loved the collection of practical aphorisms offered in this book. Anyone interested in Naseem's work should totally read his book Antifragile.
Read more
Helpful
Report abuse

C. Derick VarnTop Contributor: Graphic Novels
4.0 out of 5 stars Practical philosophy
Reviewed in the United States on January 25, 2016
Verified Purchase
Taleb has made a living showing lack of robustness and fragility in our use of knowledge. Indeed, Taleb's discussion and prediction of the fiscal crises of the late aughts was totally earned, and he was aptly able to show in "The Black Swan" and "Fooled by Randomness" that epistemological humility was direly needed in both science reporting and economics. This book takes these trends and turns them into aphorism. Taking cues from Georg Christoph Lichtenberg and E.M. Cioran more than Nietzsche, Taleb's aphorisms are pithy and common sensical. Indeed, perhaps, often too common sensical.

This is short book, easy to read, and even when you disagree with Taleb, he is humorous enough not to lose you. Indeed, I find his aphoristic writing to be easier to read stylistically than his more journalistic and extended think piece works. In many senses, these aphorisms prove that Taleb is a practical philosopher, but not necessarily a precise or consistent one. Yet the theme of the need of epistemic humility and the robustness of moral and aesthetic visions versus knowledge claims dominate the value.
Read more
33 people found this helpful
Helpful
Report abuse

S. Davis
1.0 out of 5 stars Beware. This is not a book by Nassim Nicholas Taleb
Reviewed in the United Kingdom on October 26, 2018
Verified Purchase
Quite a disappointment. It would appear to be money for old rope. Anyone, but anyone could have thrown this together after spending a day trawling the internet. What a let down Nassim, I guess you must have needed the easy money or had to meet a publisher’s deadline.
Read more
5 people found this helpful
Report abuse

Mr. Trevor Morgan
5.0 out of 5 stars Sherbet dip
Reviewed in the United Kingdom on March 24, 2017
Verified Purchase
Wonderful bedside book of what I would call quips. It is like a licorice, sherbet dip. With every dip you get another nice tangy taste.
It is a shame it is not in couplets or quatrains as the would be easier to memorise. Great author and great original thinker.
Read more
One person found this helpful
Report abuse

MR G PROCTER
5.0 out of 5 stars Read this last
Reviewed in the United Kingdom on April 21, 2020
Verified Purchase
A unusual read. This is not a naval gazing book. Read the talebs other books first and it will give context to the tone of voice this is written in.
Read more
One person found this helpful
Report abuse

Grantham
1.0 out of 5 stars fell apart after a few days
Reviewed in the United Kingdom on April 20, 2020
Verified Purchase
The second time I opened this book a number of the pages fell out.
Read more
Report abuse
See all reviews