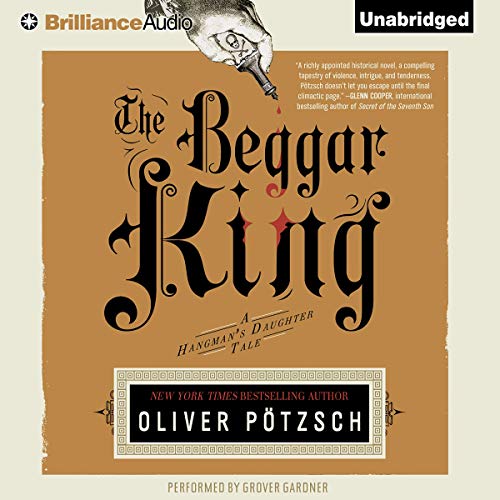 List Price: $17.99
You Save: $2.00 (11%)
By completing your purchase, you agree to Audible’s Conditions Of Use
Sold and delivered by Audible, an Amazon company
Share

4.4 out of 5 stars
4.4 out of 5
2,366 global ratings
How are ratings calculated?
To calculate the overall star rating and percentage breakdown by star, we don’t use a simple average. Instead, our system considers things like how recent a review is and if the reviewer bought the item on Amazon. It also analyzes reviews to verify trustworthiness.
Top reviews

bookgal
4.0 out of 5 stars Who do you trust as the walls seem to close in?
Reviewed in the United States on August 6, 2018
Verified Purchase
An exciting historical mystery set in 1662. In those days a hangman was also a torturer and a healer. Remember that. Hangman Jakob Kuisl travels to the imperial city of Regensburg after he receives a letter that his sister is deadly ill. But right from the get go, something is serious wrong, first on the boat to the town, then at the city gates.

When Jakob finally gets to his sister's home, he finds her and her husband murdered and he is the number one suspect. And that means that he is quickly determined to be suspicious and must be tortured to get him to confess.

Meanwhile Jakob's daughter, Magdalena, and her boyfriend, Simon, flee from home to be together, and unfortunately, they also travel to Regensburg, where they are soon sought for a suspicious fire that destroys the house of her aunt and the scene of the crime. But Magdalena finds a seeming friend, the ambassador from Vienna, while Simon makes alliances with the Beggars' guild and the leader of the freemasons.

Who and why this is happening to both Jakob and Magdalena is harder and harder to figure out and the stakes continue to climb higher. Jakob is holding out as long as possible during the torture to get him to confess, and the Regensburg's hangman, who believes in his innocence, is beginning to get suspicious of what is driving the intensity of the town elders to kill Jakob.

Friend and foe is hard to determine in this thriller of a tale. Reading doesn't get much better than this.
Read more
4 people found this helpful
Helpful
Report abuse

Ravzender
VINE VOICE
4.0 out of 5 stars A great historical mystery!
Reviewed in the United States on September 16, 2020
Verified Purchase
In 1662, Jakob Kuisl travels to Regensburg because his sister is ill. When he arrives, not only does Jakob find her dead, but he is also arrested for her murder as well as her husband's. Jakob may finally experience the torture he dishes out on a regular basis as the hangman of Schongau.

Simon and Magdalena make a hasty decision to leave Schongau after being harassed by one of the councilmen. They stumble upon the murder scene and vow to help free Jakob. This leads them to the Beggar King, a beer-brewing monk, the freeman's, and the Venetian ambassador. But all of them have their own agendas, and sometimes they match up with Simon and Magdalena's.

Jakob's time in the Thirty Year's War is explored as he recalls events and the men he led. The story shows sometimes the past doesn't remain in the past.

This book show jealousy between Simon and Magdalena on a grander scale than the Dark Monk. These two fight a lot when someone shows an interest in the other. Oliver does a fantastic job of bringing old Regensburg to life. He provides wonderful details to make the scenes come off the page/screen.

Oliver uses really long chapters and the eBook is not formated with page numbers or time to read chapter at the bottom of the screen.
Read more
Helpful
Report abuse

Richard
4.0 out of 5 stars The hangman's daughter blooms
Reviewed in the United States on July 7, 2018
Verified Purchase
In this third historical novel in A Hangman’s Daughter Tale series, the main characters go to Regensburg, where a plot lies in store for the hangman Jakob Kuisl. He is accused of murdering his sister and brother-in-law, proprietors of a bathhouse and the location of secret alchemical experiments. As expected, the eponymous daughter, Magdalena, and her husband, are in Regensburg attempting to save the hangman’s life. Layers of mysterious ongoings occur while Magdalena comes into her own as a developing series character. In temperament, she is very much like her father – easily angered, pugnacious, persistent, independent and, in her own way, generous and kind. Typical of the series, class conflict pervades the novel as the peasant and worker classes revolt against their patrician overlords. The author is gifted at keeping the reader in wonder about who the good and the bad actors are, right up to the point of merging everything together in a final disclosure at the end of the work. The book is set in 1662 Bavaria and, as in his prior series novels, the author is quite descriptive of the times in which the people live. Multiple sub-plots, developed characters, and circuitous narrative have become hallmarks of Poezsch’s work. Follow the alchemic work and the Italian Ambassador to remain ahead in solving the fundamental underlying mystery that incarcerates and tortures the Schongau hangman and brings his daughter, after whom the series is named, to life.
Read more
Helpful
Report abuse

Alan MillsTop Contributor: Fantasy Books
VINE VOICE
5.0 out of 5 stars Great addition to the Hangman's Daughter series
Reviewed in the United States on December 11, 2016
Verified Purchase
The hangman gets a letter from his sister, asking him to come to her aid as she is gravely ill. A few days later, his daughter and her boyfriend, Simon the doctor, leave town to start a fresh life where no one knows them. Unknown to each other, the hangman and his daughter are both headed to the same town, where intrigue awaits them.

Upon arrival, the hangman is immediately accused of a crime, and his daughter sets out to try and help him. Alone in a strange city, they all must try and figure out who their friends and allies are, why the hangman was framed, and how to unravel the multiple layers of conspiracy, stretching back a quarter century.

Along the way, we learn much about the hangman's back story, and about the complex class structure that constituted a European city on the 1600's--beggars, outcasts, peasants, tradesmen, priests, and the aristocracy. The complicated relationships between them provides the back drop for this story, and lends it much of its richness of character.

kittynix
4.0 out of 5 stars A Journey into the 1600's
Reviewed in the United States on September 19, 2017
Verified Purchase
I like it with some reservations. Found the descriptions of sanitary conditions in the time period fascinating. So often when we read novels about that period, that part of the equation is left out and I think it seres as a reality check for those who take our services for granted. I'm sure those in the two hurricane attack areas could somewhat identify .
Otherwise I liked the characters and enjoyed the interesting plots although at times I thought a good edit might have been useful. I have read two others by the same author and since I find that time period in history worth a look, I enjoy them. They also serve as a reminder of the evolution of government from the small unit village to the larger more crowded city. It's a reminder that in spite of the historical period the same "types" always exist!
Read more
2 people found this helpful
Helpful
Report abuse
See all reviews

oona
5.0 out of 5 stars Entertaining
Reviewed in Canada on July 19, 2019
Verified Purchase
This book is very well written and makes the reader feel as though she or he is in the story with the characters. It holds the attention of the reader right to the end. I loved it.
Read more
Report abuse

kenben
5.0 out of 5 stars Great series of books!
Reviewed in Canada on April 24, 2014
Verified Purchase
This is the third book I've read in the Hangman's Daughter series and I enjoyed it just as much as I enjoyed the previous two -- the Hangman's Daughter and the Poisoned Pilgrim. Quite simply this is a marvelous series. This volume, like the first two, is a thrilling adventure, an intriguing mystery, a fascinating history lesson, filled with wonderful characters. Heavily based on fact and on the author's family history (which includes a hangman of the same name as the main character) it is a fascinating look at Germany (and much of Europe) in the mid-1600s. Lives were indeed short, nasty and brutish. I would suggest you start with the first book and work your way along. Though not absolutely necessary, the journey is well worth it. I'd put it right up there with Ken Follett's Pillars of the Earth.This really is a marvelous series and I am looking forward already to book four though I must admit some regret because at the end of four there are no more (yet).
Read more
One person found this helpful
Report abuse

islanderray
5.0 out of 5 stars Like it or leave it.
Reviewed in Canada on March 1, 2013
Verified Purchase
Like all the Hangmans Daughter books you either like them or leave them, I love them. The Beggar King keeps you guessing right to the end, it maybe the best one yet. I Can't wait for the next one.
Read more
3 people found this helpful
Report abuse

Bev Smith
4.0 out of 5 stars Four Stars
Reviewed in Canada on November 14, 2016
Verified Purchase
great read, part of a series and so far all in the series are excellent reads
Read more
Report abuse
See all reviews
Back to top
Get to Know Us
Make Money with Us
Amazon Payment Products
Let Us Help You
EnglishChoose a language for shopping. United StatesChoose a country/region for shopping.
© 1996-2021, Amazon.com, Inc. or its affiliates