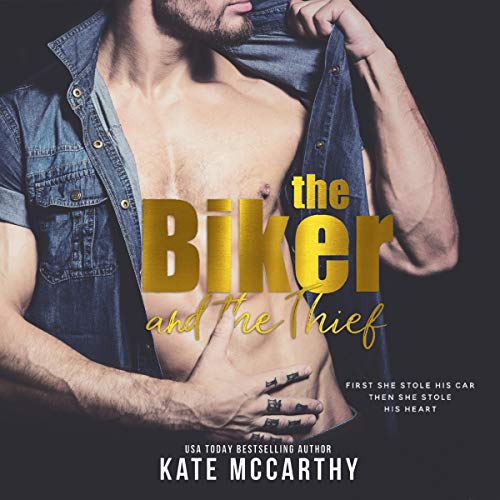 The Biker and the Thief

I’m a college student with a secret past. Not only did I boost cars, but I was also the best in the business. I’m trying to go straight, but the Marchetti Organization has other plans, and now I’ve got 12 weeks to complete a job so big it’s almost impossible. I’m on a tight deadline, but an irritating biker dude keeps thwarting my attempts to deliver. He’s the big bad wolf my brother always warned me away from, but doesn’t every girl want a bad boy who’s good just for her?

I’m a biker with a violent past that haunts me every day. I’m keeping myself busy with my brand-new car restoration business when an annoying little thief manages to steal a Dodge Charger right out from under my nose. I hunt her down, only to discover the woman behind the wheel is beautiful, fearless, and wild - all the things I find impossible to resist. But she’s in trouble, and I won’t hesitate to step in and change the plan - bring the entire Marchetti Organization to its knees, and make Ace mine.

Enjoy a free audiobook + more
Learn more about Membership
List Price: $34.99
You Save: $4.37 (12%)
By completing your purchase, you agree to Audible’s Conditions Of Use
Sold and delivered by Audible, an Amazon company
Share

Luisa Rivas-Martinez
5.0 out of 5 stars Fun and emotional
Reviewed in the United States on April 3, 2018
This book was fantastic! An adventure from beginning to end. The beginning is a little dark, and then it changes into a more lighthearted read, with little touches of angst. It was a delight to read this book, because the characters were just so inviting. Kelly was handsome with a dark interior, Arcadia (a.k.a. Ace) was klutzy and gutsy and just so adorable. Their families and friends were funny and supportive, except for Ace’s brother Mason, who has a chip on his shoulder and was a real douche most of the time. And the best part, the action centers around car theft, but these thieves are so nice I would love to have them for friends!

Ace comes from a family of car thieves, the kind that never get caught. Ace learned her craft from her grandfather Racer Jones, who is retired and she’s now the best on the street. Her brother used to be the best but he’s paralyzed from a heist gone bad. I loved his name, they used to call him The Ghost. Ace’s best friend is Echo, a computer prodigy who is her partner in crime. They are really a force of nature together.

Kelly is the one with the dark history. Raised in an abusive home by an alcoholic father, his mother, older brother and himself were victims to this monster’s abuse. As soon as the older brother Casey turned eighteen, he left home with the promise to return for Kelly and their mother in six months. He didn’t make it on time. One tragic night, his father had his crazy on and it ended in tragedy. Kelly left home and joined the Sentinels MC, was absorbed into his new family and never looked back. Within the Sentinels, his friends are Luke, Lee and Hammer. Luke is a riot and is there for Kelly whenever there’s trouble.

Arcadia used to work for an illegal car dealer and she thought she was doing her last job. She wanted to retire, finish college and start a straight life. But Marchetti blackmailed her and gave her a list of twelve cars to steal, or he would harm her family. Now Kelly has to steal more cars and then see if she can negotiate out of the life.

When Kelly and Ace meet for the first time, they each felt a bang, like destiny calling. Ace was in the middle of her big project and wasn’t sure if she had the time to pursue a fling with Kelly. Kelly had intimacy problems. He was always good for one-night stands, but when he meets Ace, he feels the tug for something more. When he’s with Ace, he feels fun and free, something that he had never felt before. With his background, he has issues of worthiness, but the attraction he feels for Ace is so strong that he keeps coming back. Ace makes him try to be a better man. He seems badass, but he is kind. At moments, he was wise. I loved Ace and Kelly together. They were fun, klutzy and hot together. I laughed so hard at some scenes, then got a lump in my throat at others. When Ace takes Kelly to her parent’s home for Sunday dinner, and also takes him to her grandfather to construct a greenhouse, you can see that Kelly has a thirst for family life.

This book is, at times, funny, emotional, violent, endearing and suspenseful. There are car chases with police cars following, rushing through expressways, police intervention, jail, lots of sex scenes, lots of family time, lots of just caring moments between Kelly and Ace. The second part kept me passing the pages in a frenzy to know what would happen and I have to confess to doing some skimming and backtracking because it got so good I needed to find out what happens later. This is the first book I read by this author, but after this wonderful book, I’m sure going to look up more books from her to read!
Read more
One person found this helpful
Helpful
Report abuse

The Thief is Kelly Daniels story, and for those who are familiar with Kate's work, and have read the Give Me series, particularly Give Me Grace you will probably recognise this name. Although this title is a standalone, I would highly recommend reading the Give Me series as well.

Kelly is a rough, tough, sexy, strong, bad-ass biker, a member of the Sentinels MC. He's loyal and finds the brotherhood and sense of family with the Sentinels missing from his own childhood.

Arcadia 'Ace' is not your run of the mill adrenaline junkie, she gets her thrills from stealing cars. She's strong, sassy, tough and intelligent. Incredibly loyal, with a passionate and big heart, Ace with do anything to protect those she cares for.

The Thief is a fast paced story, with well developed endearing characters. The side characters draw you further into the Kelly and Ace's world, and I cannot wait for the next title in this series. I look forward to seeing more of Fox and Echo in the future.

The chemistry and attraction that Ace and Kelly share is intense and undeniable. The banter and dialogue is snarky, witty, fun and humorous. Their antics don't lack for moments full of flirtation, heat and steam.

If you are looking for a story full of heat, heart and humor, intrigue and suspense with strong themes of friendship and family look no further than The Thief. I cannot recommend this title highly enough!
Read more
One person found this helpful
Helpful
Report abuse

Amy McCann
4.0 out of 5 stars Fantastic book I loved Kelly and Arcadia's story :)
Reviewed in the United States on April 7, 2018
I recieved a complimentary copy of The Thief for an honest review through the Crazy Cajun Book Addicts.

I really enjoyed the pace of this book it kept you intrigued as to what Arcadia's next turn was going to be when it came to switching cars I've never read a book that centres around grand theft auto but it was brilliant.

Even when Kelly meets Arcadia neither knows he in an M.C and that spells disaster for both individuals when they have such an amazing spark between them and their love of cars.

Arcadia knows that Kelly's all wrong and risks losing her brother Mason to be with this guy, it's an M.C crew that destroyed Mason's life and he knows her needs her as far away from Kelly as possible of only she'd listen.

Torn between lover and brother is it possible for her to have both.

With one last job to do before she gets the quiet life she craves can she do it without my thing going wrong! And keep Kelly who holds her heart despite everything!

Great book from an author I've not read for before! It's a must read nd Thankyou Kate McCarthy you did the characters justice with a great story line.
Read more
Helpful
Report abuse
See all reviews
Back to top
Get to Know Us
Make Money with Us
Amazon Payment Products
Let Us Help You
EnglishChoose a language for shopping. United StatesChoose a country/region for shopping.
© 1996-2022, Amazon.com, Inc. or its affiliates