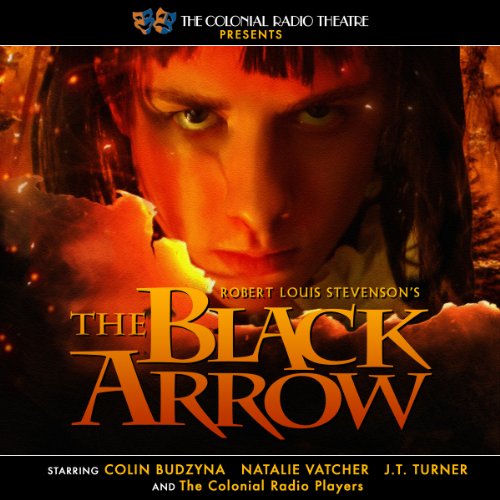 Set in England during the War of the Roses, this swashbuckling historical epic tells of a young man betrayed by his brutal guardian and forced to seek the help of a mysterious society. Brimming with action, adventure, suspense, and romance, it is a classic portrait of England during one of its most tumultuous eras.

Robert Louis Stevenson's The Black Arrow is an adventure for the entire family.

Enjoy a free audiobook + more
Learn more about Membership
By completing your purchase, you agree to Audible’s Conditions Of Use
Sold and delivered by Audible, an Amazon company
Share

3.8 out of 5 stars
3.8 out of 5
32 global ratings
How are ratings calculated?
To calculate the overall star rating and percentage breakdown by star, we don’t use a simple average. Instead, our system considers things like how recent a review is and if the reviewer bought the item on Amazon. It also analyzes reviews to verify trustworthiness.

Michael E. Farrell
4.0 out of 5 stars Grandfather of all political thrillers
Reviewed in the United States on January 17, 2016
Verified Purchase
Great classic story in the time of the War of the Roses in England, between the end of the 100 year war and the beginning of the Tudor dynasty.

The story centers around the adventures of a young man, Dick, who finds the knight that has raised him was actually the murderer of his father and only kept him alive to sell his inheritance.

The story then turns into one deadly encounter after another as Dick tries to stay alive while fighting against his old master. His timely escape from one deadly episode after another is in the style of modern political action heroes such as Mark Cole ant Mitch Rapp.

While the setting of the story is dated and told in a somewhat archaic style, if you enjoy a good adventure story full with love, betrayal and a lot of fighting go ahead and give The Black Arrow a try.
Read more
3 people found this helpful
Helpful
Report abuse

njreviewer
5.0 out of 5 stars Just what I had hoped for !
Reviewed in the United States on February 13, 2015
Verified Purchase
After reading about two other e-versions of The Black Arrow containing the N.C. Wyeth illustrations, I took a chance and hunted for another version and found this one. I love it. I will admit to being more interested in the quality of the illustrations than of the text, but the book seems well organized and navigable and the font is clear and easy to read. I am viewing it on a Kindlefire HD 7" and find the quality reproductions of Wyeth illustrations in this book to be wonderful. I was so happy to find one of my life long ( I'm 65) favorite illustrations was included as it should have been ( that original painting and others are in the collection of the Brandywine Museum in Chadd's Ford, PA ). I was able to get fine quality enlargements and good color with none of the pixelization problems that other reviewers complained about in the other two versions. I'm amazed and delighted to have found this at such a good price too!
Read more
One person found this helpful
Helpful
Report abuse

Samantha Jungers
3.0 out of 5 stars I enjoyed the approximate first half of it very much -- ...
Reviewed in the United States on March 29, 2016
Verified Purchase
And here we go.
I have mixed feelings about this book. I enjoyed the approximate first half of it very much -- up until the point where Dick and Joan(na) are separated. The dynamic between the two leads is interesting to read and the dangers they face feel real. After that, I felt the book lost steam. The plot and characters held a lot of potential I feel the author didn't capitalize on. The book is titled The Black Arrow, but I daresay The Black Arrow is only involved fleetingly. Even in the battle scenes, I felt no tension, no sense of urgency. And the final confrontation was rather disappointing.
Read more
One person found this helpful
Helpful
Report abuse

Mary
1.0 out of 5 stars This kindle edition doesn’t download correctly
Reviewed in the United States on February 26, 2018
Verified Purchase
I would recommend not buying this version. When I downloaded it to our kindle, for some reason, it was just a bunch of numbers. I haven’t had this happen before so not sure why. We ended up buying another copy of the book and that one worked.
Read more

1.0 out of 5 stars This kindle edition doesn’t download correctly
By Mary on February 26, 2018
I would recommend not buying this version. When I downloaded it to our kindle, for some reason, it was just a bunch of numbers. I haven’t had this happen before so not sure why. We ended up buying another copy of the book and that one worked.
Images in this review

Albert C. Doyle
5.0 out of 5 stars Tricky for a modern 5th/6th grader, but worth the effort
Reviewed in the United States on November 18, 2013
Verified Purchase
A terrific historical novel -- the narrative voice may be a trifle archaic for the modern young reader -- I adored it in 1972 or so, but my girlfriend's son struggled with the prose (after really digging Treasure Island). It's also the one RLS classic with a female protagonist.
Read more
3 people found this helpful
Helpful
Report abuse

Mr H
4.0 out of 5 stars Purchased for 6th grade summer reading
Reviewed in the United States on January 17, 2014
Verified Purchase
This was purchased for my son as 6th grade summer reading. It is well beyond his and possibly all 6th-7th graders' reading level. The archaic English makes it harder than it should be. Still a great book with lots of period flavor as RLS always provides.
Read more
2 people found this helpful
Helpful
Report abuse

Nick Bird
5.0 out of 5 stars All Time Favorite
Reviewed in the United States on December 2, 2012
Verified Purchase
I've loved this story since I was in high school. It's still my favorite book to this day. This particular copy was purchased for a Christmas gift. It appears to be entirely legit and five star worthy like any other copy of this book...
Read more
4 people found this helpful
Helpful
Report abuse
See all reviews