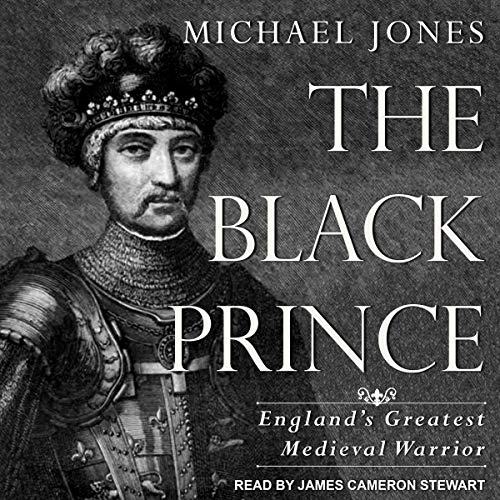 4.7 out of 5 stars
4.7 out of 5
123 global ratings
How are ratings calculated?
To calculate the overall star rating and percentage breakdown by star, we don’t use a simple average. Instead, our system considers things like how recent a review is and if the reviewer bought the item on Amazon. It also analyzes reviews to verify trustworthiness.
Top reviews

Susan Feuille
5.0 out of 5 stars Best Biography of Edward, the Black Prince
Reviewed in the United States on June 25, 2018
Verified Purchase
After visitingng his tomb in 1980, I have read every book I can about the Black Prince and his wife, Joan of Kent. This book is the best written of all and brings this long dead Prince to life nearly 650 years after his death. Descriptions of battles have not been of high interest for me, but Michael Jones makes it easy to understand how the Prince was so successful and makes reading the accounts so enjoyable. Mr. Jones provides a balanced view of Edward's life and his description of Princess Joan's complicated marital history is the clearest synopsis I have read. The bibliography is a delight to read for future reference, too. This book is a great addition to any history student's bookshelf and I highly recommend reading this terrific, extremely well written biography!
Read more
33 people found this helpful
Helpful
Report abuse

My only complaint is the shoddy job done by whoever edited the Kindle edition. Too many obvious uncured typos and also what I deem to be disjointed syntax in a couple of places. Have found the same issues in other Kindle books. A simple spell check would eliminate most but not all the issues. Why does this problem persist in today's quality control environment?
Read more
24 people found this helpful
Helpful
Report abuse

Randall - a student of history
4.0 out of 5 stars It would be helpful to know a little French.
Reviewed in the United States on May 23, 2018
Verified Purchase
I enjoyed this book very much. I knew little about the Prince and his battles. I look forward to reading more about them. It also piqued my interest in the plague. I look forward to reading more about that too. I hope someone comes up with a way to touch a word, similar to the way you can get a definition now, and have the word spoken. Especially foreign languages. Otherwise it would be nice to know a little French to better enjoy this book.
Read more
24 people found this helpful
Helpful
Report abuse

Kindle Customer
5.0 out of 5 stars One of the most enjoyable histories I have ever read
Reviewed in the United States on February 2, 2020
Verified Purchase
I have rarely read a book so well researched that kept me captivated from beginning to end. I have always found non-fiction, particularly the histories of countries, more interesting than fiction and this book is a fine example. Edward lll was one of the most notable kings of England. He and his son the "Black Prince" were two of England's most successful warriors. Their stories capture war, victories, defeats, treachery. Overarching is the character of the leaders, their strengths, their weaknesses, their love lives. It is entrancing and I was sad to reach its end.
Read more
7 people found this helpful
Helpful
Report abuse

bruce p. schoch
5.0 out of 5 stars Epitomizes the 14th Century
Reviewed in the United States on March 28, 2021
Verified Purchase
Edward, son of Edward III, was destined to go through life as The Black Prince, for he was always the king in waiting to his illustrious father, and indeed, died before him. The author of this superb history constantly refers to him as The Black Prince, a moniker he gained from the black surcoat over his armor. Even in modern times, he appeared as such as the embodiment of English aggression and evil over the French during the 100 Years War, by both English and French playwrights treatment of the contemporaneous Joan of Arc. He cut his spurs, so to speak, at the Battle of Crecy and later on, won the battle of Poitiers in his own right. He was a master jouster and a generous, even lavish giver of gifts to nobles and commons alike who had pleased him. His entire life from teenager onward was devoted to enlarging his father's somewhat doubtful claims to French territories, and thus he was a warrior prince. Even the Black Death prevalent during that tumultuous century did not deter him. Recommend reading the late Barbara Tuchman's The 14th Century for an overview of the environment as a companion work, and the late Nigel Tranter's The Bruce Trilogy for events that formed his father's upbringing.
Read more
2 people found this helpful
Helpful
Report abuse

jason sanders
5.0 out of 5 stars Great read about real Knights
Reviewed in the United States on August 23, 2018
Verified Purchase
I really enjoyed this book. Its thoroughly written without being overly long and though I did need to you tube some of the French pronunciations It didn't slow down the action of the book. Not knowing too much about England in this period but being familiar with names like Crecy and Poitiers, the book filled in a lot of history gaps for me. The author also does tours in France that cover the main battlefields and sites during the period of the Hundred Years War so he must be a fantastic authority of the topic.
Read more
7 people found this helpful
Helpful
Report abuse

Jerome Keller
5.0 out of 5 stars Terrific piece of history.
Reviewed in the United States on July 4, 2020
Verified Purchase
This book is written by a very meticulous historian. It is not only a book about a tremendous military genius but also about the times in which he lived. Michael Jones is a great writer and story teller. If you like history and not some fools slant on history you will love this book!
Read more
2 people found this helpful
Helpful
Report abuse

Rugby3
3.0 out of 5 stars Detailed, exhaustive but ...
Reviewed in the United States on May 5, 2019
Verified Purchase
I liked the academic work that's gone into this book, but the author moves around the narrative in ways that are not necessarily sequential and sometimes confusing (to me, at least).
Read more
5 people found this helpful
Helpful
Report abuse
See all reviews

Daniel
5.0 out of 5 stars Worth a read.
Reviewed in the United Kingdom on December 11, 2018
Verified Purchase
Was a very interesting read and well written.
Read more
Report abuse

stephen clodd
5.0 out of 5 stars great book
Reviewed in Canada on September 22, 2020
Verified Purchase
Great read, enjoyed the book from start to finish and learnt get deal on the black prince and what it meant to be a knight!
Read more
Report abuse

Amazon Customer
5.0 out of 5 stars Christmas gift
Reviewed in Canada on January 2, 2020
Verified Purchase
This was a gift to my niece and she was very happy with it
Read more
Report abuse
See all reviews
Back to top
Get to Know Us
Make Money with Us
Amazon Payment Products
Let Us Help You
EnglishChoose a language for shopping. United StatesChoose a country/region for shopping.
© 1996-2021, Amazon.com, Inc. or its affiliates