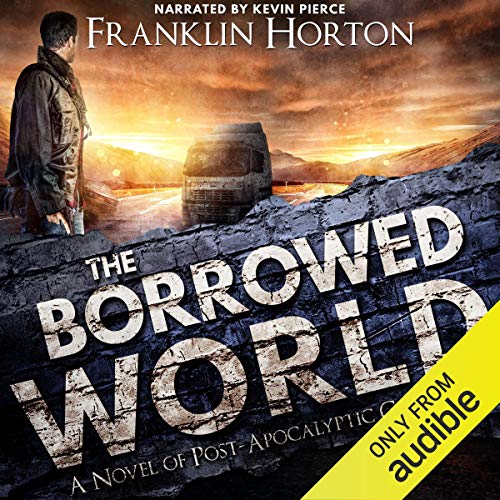 The Borrowed World: A Novel of Post-Apocalyptic Collapse, Volume 1

4.6 out of 5 stars
4.6 out of 5
1,346 global ratings
How are ratings calculated?
To calculate the overall star rating and percentage breakdown by star, we don’t use a simple average. Instead, our system considers things like how recent a review is and if the reviewer bought the item on Amazon. It also analyzes reviews to verify trustworthiness.
Top reviews

Robert Steven Thomas
4.0 out of 5 stars I IMMEDIATELY ORDERED THE SECOND BOOK IN THIS SERIES UPON COMPLETION
Reviewed in the United States on February 27, 2016
Verified Purchase
There have been a lot of "dystopian-future" novels written about how the US could collapse into an apocalyptic society of terror and turmoil as a result of a terrorist attack and subsequent breakdown of our power grid and infrastructure. I have read several of them. I personally found this particular book to be highly believable and realistic. When a small group of workers from southern Virginia attend a company convention in northern Virginia all hell breaks loose. This is the story of how they attempt to return home to their families over 250 miles away. Their efforts are fraught with peril and danger along the way. The situations they encounter seemed to me to be natural and acceptable, as well as the other people and situations they encounter along the way. A WORD OF CAUTION ... the author of this book seems to personally be politically conservative. That won't be a problem for most; but, reading through the reviews you will see that several individuals wrote negative reviews primarily because they appeared to have a problem with some of the right-leaning actions and decisions the protagonists were forced to make which take place throughout the stories unfolding. Sad to say, but, if you personally are very liberal in your life perspective, you might want to skip this book and find one more supportive of your own ideology. (I make this claim not to be judgmental but to offer sincere advice.)
Read more
97 people found this helpful
Helpful
Report abuse

M. Bennett
3.0 out of 5 stars Good story with some faults to it
Reviewed in the United States on April 25, 2020
Verified Purchase
I had mixed feelings on this book. On one part, I really liked it. It told a believable and scary apocalyptic story. I was reading this during the Covid-19 situation and even though it is not the same, it still was scary enough to make you do an about face. I also liked a lot of the information and tips the book gave you about being prepared. I feel those things can always come in handy. I felt the situation that the characters were in was also believable.
What I didn't care for was the main character, Jim. He was a jerk and even though he admitted to it, it doesn't make him any more readable. He might know a lot about survival but so did his buddy, Gary and yet Gary didn't act like a buffoon. I also didn't like how all the bad guys were so stereotypical. You had your gang mexicans and whites with their tattoos, or the trailer park people that looked like they didn't work a day in their life, or the rednecks with the wife-beater shirt and the sleeveless camo shirt. I mean... really?!? I had to laugh every time a new "bad guy" came into the picture. Sometimes the scariest people are the ones that don't look bad but are. Also, there was pages and pages describing guns, what each gun did, the ammo and how many of each and what each ammo did. That was just way too much info.
I'm not sure if I'll continue with the series. I might do one more book. If I find it still has all the parts that bother me, then there definitely won't be a book 3 for me.
Read more
11 people found this helpful
Helpful
Report abuse

H. Bala
TOP 500 REVIEWER
5.0 out of 5 stars "I am not a soldier. I am a paranoid hillbilly wanting to get home to my family."
Reviewed in the United States on January 15, 2019
Verified Purchase
Franklin Horton is my latest binge-read. I tore thru his shared universe stuff in two weeks, except, dang it, I did it out of order, having started with the Locker Nine books, then The Mad Mick, before diving into The Borrowed World series. I'm caught up now and frustrated that I have to wait for new material like the rest of you peasants.

All's I know is Franklin Horton can write the dickens out of a post-apocalyptic novel. It's even more gratifying that these books are set in the same world, and that characters from the three series bump into each other.

It's terribly ironic that Jim Powell, main protagonist of The Borrowed World series, works for a mental health agency, seeing as he can't stand people, so I assume his empathy holds at a low ebb. When simultaneous, coordinated terror attacks cripple the nation, Jim and his five co-workers, away on a work seminar in Richmond, begin their 300-mile journey home that's fraught with, well, if you're familiar with this genre, you can figure out the challenges our party is about to face.

It's not that Jim Powell is a prepper as much as a product of hillbilly upbringing, raised on the belief that the government cannot be trusted. He comes from hardy and independent stock. He's the driving force that galvanizes his co-workers into beating feet home. He may not win the blue ribbon for nice, but he's the sort of hombre you want around when America's infrastructure collapses. And who we kiddin'? Jim Powell IS a prepper.

Book alternates between Jim's first person narration to Jim's wife Ellen's third person perspective. We observe as Ellen holds down the fort back home as she and the kids, 13-year-old Pete and 11-year-old Ariel, attempt to follow Jim's intruction manual for emergencies. My personal approval rating for Ellen kept on skyrocketing as the book progressed. She knows how to handle her business.

Chaos and lawlessness. Supply runs. Leveling up with your guns and ammo. FEMA doing what FEMA does when TEOTWAWKI goes down, or, rather, what the post-apocalyptic survival authors posit FEMA would do when stuff goes down. It's said FEMA will confiscate your guns and supplies in the name of the greater good, that all gas and diesel will be comandeered for authorized emergency vehicles. FEMA inspires such paranoia in the prepper community, and I hope they're wrong, but I'm leaning towards making sure I got my sh-- squared away, just in case. Just once, for swerve's sake, it'd be nice to see FEMA portrayed as a benevolent and capable group. I think the only time FEMA's been written as more or less a neutral force - instead of as an actively malevolent entity - is in Doreen Stalter's Allison's Secret: Post Apocalyptic Woman.

I guess you should take time to get to know Jim's co-workers as some of them will feature heavily in later volumes. But only some of them. With these kinds of books, it's a game of Russian roulette as far as which characters survive. Try hard not to get attached. But I had a soft spot for two of the co-workers: Gary, an older fellow prepper, and Randi, a no-nonsense grandmother.
Read more
19 people found this helpful
Helpful
Report abuse
See all reviews

hefty
3.0 out of 5 stars Not bad for its dub-genre, but there are a few inconsistencies.
Reviewed in the United Kingdom on January 1, 2017
Verified Purchase
A pretty good book for its genre (I read a fair few of these type books as a sub-genre) the initial reason for the 'collapse' was a bit cliched and not really believable, and I don't believe the descent into chaos would happen anywhere near as quickly as it did, but the characters were ok, and their dialogue was fairly realistic, even if they were a bit blaise about so much death in a short time span. I will read on in the series, which is not often the case with this kind of fiction
Read more
Report abuse

JMc
5.0 out of 5 stars Outstanding
Reviewed in the United Kingdom on September 16, 2015
Verified Purchase
Outstanding book, well written and totally absorbing storyline. I became so engrossed in the story that I didn't notice if there were any typo's. I do hope there is a sequel to the book as I would like to know if the characters make it back to their homes and if Jim's family remain safe.

I won't detail the storyline as other reviewers already have, safe to say if you want to read a PA story that is very thought provoking and outlines what would happen immediately after a collapse of society this is a book for you.
Read more
Report abuse

Amazon Customer
5.0 out of 5 stars Very very very readable really enjoyed it
Reviewed in the United Kingdom on September 10, 2015
Verified Purchase
This book is really enjoyable. The characters very believable and you want them to succeed. The steady deterioration of the situation makes great sense, as world deteriates hour by hour day by day. There are no character extreme people to be on the journey all believable. I am really looking forward to book two
Read more
Report abuse

Richard
4.0 out of 5 stars Really enjoyed this book
Reviewed in the United Kingdom on November 12, 2015
Verified Purchase
Really enjoyed this book, and once finished downloaded and read the sequel. Well written, fast pace, and I was pleasantly surprised by the lack of unneccassary gory detail.
Read more
Report abuse

crazy diamond
5.0 out of 5 stars Must read apocalypse story
Reviewed in the United Kingdom on June 23, 2015
Verified Purchase
Just brilliant, a great read, although very puzzled that the story stops well before the characters reach the final destination????. Is there a second volume to follow?, only I can't find anything about it.
Read more
Report abuse
See all reviews
Back to top
Get to Know Us
Make Money with Us
Amazon Payment Products
Let Us Help You
EnglishChoose a language for shopping. United StatesChoose a country/region for shopping.
© 1996-2021, Amazon.com, Inc. or its affiliates