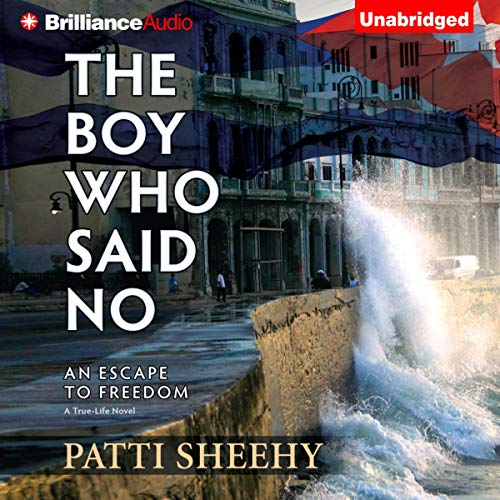 The Boy Who Said No: An Escape To Freedom

As a boy, Frank Mederos’ grandfather teaches him to fish, to navigate the seas, and to think for himself, much-needed skills under the new Castro regime. When Frank is drafted into the army, he is soon promoted to the Special Forces, where he is privy to top military secrets. But young Frank has no sympathy for Fidel. He thirsts for freedom and longs to join his girlfriend who has left Cuba for America.

Frank yearns to defect, but his timing couldn’t be worse. After two unsuccessful escape attempts, he learns that the departure of the next available boat conflicts with upcoming military exercises. If Frank stays, he will miss the boat. If he doesn’t, he will be the object of a massive manhunt.

Problems abound: How will Frank escape the army base without being seen? Where will he hide until the boat comes? How can he outwit his commanding officer? And how can he elude hundreds of soldiers ordered to bring him back “dead or alive”?

Frank’s true story, a tale of love, loss, and courage, will keep you on the edge of your seat until the very end.

4.5 out of 5 stars
4.5 out of 5
379 global ratings
How are ratings calculated?
To calculate the overall star rating and percentage breakdown by star, we don’t use a simple average. Instead, our system considers things like how recent a review is and if the reviewer bought the item on Amazon. It also analyzes reviews to verify trustworthiness.
Top reviews

helen francis
5.0 out of 5 stars Freedom
Reviewed in the United States on March 29, 2016
Verified Purchase
This book makes you realize what a gift freedom is. Castro wanted a classless life in Cuba. With his communistic government he took everything valuable from the Cubans, like their businesses their land and most of all their right to speak freely. What he got were a people totally dependant on the government to live and a very poor and somewhat illiterate country. It is no wonder so many try to escape for a better life. I hate to think how many people are in their jails for the slightest infractions against the government. This is my first book read about Cuba and I highly recommend it. I think Cuba is a little like North Korea.
Read more
2 people found this helpful
Helpful
Report abuse

Char
4.0 out of 5 stars This book will give you an up close look at why freedom will always be worth fighting for.
Reviewed in the United States on January 14, 2019
Verified Purchase
I appreciated the look at the effects of the Castro regime from a personal level on the lives of real people. I spent a week in Cuba several years ago where I had one on one contact with a number of people. They are wonderful people that still live under an oppressive government. Food shortages always, except for the tourist. One on one conversations with people who need something as simple as pain relief were very sad. This book explained it in a way my visit could not because of the control of free speech.
Interestingly when we left Cuba and flew home to Florida I was shocked by how quickly my world changed back to freedom and plenty. This book made me understand what happened to the Cuban people and why they tried so desperately to escape.
Read more
2 people found this helpful
Helpful
Report abuse

Amazon Customer
5.0 out of 5 stars Read this book before you vote
Reviewed in the United States on February 26, 2020
Verified Purchase
I liked this book because it accurately describes what I saw for myself when I visited Cuba. Our young guide, who was not one of the guides provided to the cruise ship, told stories much like those of Frank. How the government has impoverished Cuba and only the leaders and the military enjoy a lavish lifestyle. She told how she was bused from school to hear megalomaniac Fidel Castro harangue on for 5 hours in the hot sun. I laughed when I heard Bernie Sanders mention Fidels literacy program. I wished that someone would tell the audience to read Frank's story, especially the part about the literacy program. My visit to Cuba and this book has convinced me that I want no part of a socialist system.
Read more
Helpful
Report abuse

Jack C. Scott
5.0 out of 5 stars a statement on meaning and the result of commitment and promise
Reviewed in the United States on July 24, 2013
Verified Purchase
Much can be and needs to be expressed about this book. There are values written in and clarified at many different parts, the values that express the great truths on which the courageous, the loyal, the dedicated, the determined live their lives. My favorite understanding of love is that it gives nourishment. Beauty is also to be understood I believe by that which gives engages, enriches, and energizes. Patti's magnificent writing does that as she tells the story of one of the great figures in our history. Her book is one of love and beauty. And whereas there is much depth for me to the book, there is also a reading of great excitement, thrill, wonder, and awe. For anyone who wants to read a very stimulating book, to the emotions and very importantly to the mind and even more significantly to the soul, I highly recommend this book. And I also echo with other reviewers: let us get to Stalkers! I am eagerly waiting for the next installment. And in finality, not only do I thank Patti for writing in a delightful way, I also express thanks to Frank and his many colleagues, friends, and family.
Read more
2 people found this helpful
Helpful
Report abuse

Stanky
5.0 out of 5 stars Suspenseful Escape!
Reviewed in the United States on May 15, 2015
Verified Purchase
Frank Mederos' remembrances to the author are vivid, full of suspense and heroic. Patty Sheehy does a masterful job in writing the words of the escapee by keeping the reader in constant concern for the welfare of Frank's true escape to freedom. We know about Cuba and its' overthrown to Communism through the last 60 years of newspaper writings and television reports but this historical fiction brings to us the real words and thoughts of an escapee. I could not put the book down once I started to read the "real" thoughts of a want-to-be free Cuban during the terror of Fidel Castro. I've just ordered the ongoing life of Frank Mederos after his eventual escape because I want to know what happens in his life once he reaches the United States.
Read more
One person found this helpful
Helpful
Report abuse

Dick
5.0 out of 5 stars Great story of common life in 60s Cuba
Reviewed in the United States on August 1, 2015
Verified Purchase
I thoroughly enjoyed this book. As the author explained in prologue, it is classified as historical fiction because the author had to make up some dialogue, especially for scenes when Frank Mederos, the hero, was not present. Otherwise the book is entirely his story, as told to the author in a series of interviews, of his early life in Cuba during the early years of the Castro regime. I love this kind of a book. It is primarily a story but it introduces the reader to a historical time and place. This book is especially good because its focus is on the lives of the common Cubans in the early '60s. I can't wait to get into the sequel.
Read more
One person found this helpful
Helpful
Report abuse

Joyce L. Patrick
5.0 out of 5 stars To Stay or Go??
Reviewed in the United States on April 30, 2014
Verified Purchase
This wonderful story helps me understand a fine old man I once knew. He, like this man, was a proud man, but did not like to talk about the past. He, like this man, was afraid to talk too much for fear of reprisals against those left behind. It shows how we Americans & Cubans alike, were so wrong to think we were fixing the problem of Batista. The result was worse, I think. Castro had great ideas to start, but as the wise man said, "absolute power corrupts absolutely". This story sheds much light on many things & explains why many will not speak of these things as boldly as this gentleman. I look forward to the "rest of the story".
Read more
One person found this helpful
Helpful
Report abuse

John Dobbyn
5.0 out of 5 stars A must read true thriller
Reviewed in the United States on February 3, 2014
Verified Purchase
This is a magnificent story, the more magnificent for it being true, told by a superb story-teller. Patti Sheehy has the talent to put the reader inside the mind and heart of an extraordinary man living through an odyssey forced on him by the disastrous conditions in Cuba under Castro's communist regime. It is a history lesson told intimately through the very personal experiences of one soul brave enough to "say no" to an overwhelming dark power. Patti's unquestionable writing talent causes us to leave the comfort of our chairs and virtually live every stress and danger and, ultimately, the exhilaration of the victory of one human soul. Do yourselves a big favor. Read "The Boy Who Said No."
John F. Dobbyn
Read more
2 people found this helpful
Helpful
Report abuse
See all reviews

Stephen McNamee
5.0 out of 5 stars CASTRO'S CUBA UNVEILED
Reviewed in Canada on April 3, 2016
Verified Purchase
The suspense is riveting! At last, I can understand the horrors facing Cubans attempting to escape the tyranny of Fidel Castro's Cuba in quest of freedom in the United States. Frankie's personal story is a nail-biter I could not put down until I completed the book, then promptly purchased the sequel, The Stalker, which I now look forward to reading very soon. A beautifully-written epic that portrays the bravery and determination of the Cuban people who desire nothing more or less than the peace and tranquility inherent in man's God-given right to be free.
Read more
Report abuse

nisbane
5.0 out of 5 stars Five Stars
Reviewed in Canada on May 9, 2018
Verified Purchase
An excellent story.
Read more
Report abuse

Ron L - Virgil, ON
5.0 out of 5 stars Five Stars
Reviewed in Canada on December 1, 2016
Verified Purchase
A very interesting book especially for those of us who have lived through that time period.
Read more
Report abuse
See all reviews
Back to top
Get to Know Us
Make Money with Us
Amazon Payment Products
Let Us Help You
EnglishChoose a language for shopping. United StatesChoose a country/region for shopping.
© 1996-2021, Amazon.com, Inc. or its affiliates