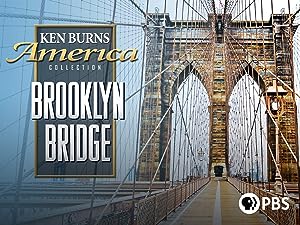 Season 1
(138)
1982TV-G
In Brooklyn Bridge, Ken Burns captures the greatest achievements of the industrial age, the dramatic story of the men who built it, and the immense charm this granite and steel structure has exerted on generations of city dwellers.

Watch with PBS Documentaries
Start your 7-day free trial
Add to
Watchlist
Redeem a gift card or promotion code
By ordering or viewing, you agree to our Terms. Sold by Amazon.com Services LLC.
Write review

Great UncleReviewed in the United States on September 4, 2020
5.0 out of 5 stars
History and poetry
Verified purchase
The Great Bridge in all it's glory. History followed by the powerful effect it had and still has on the imagination. I'm a born New Yorker and I tell anyone, tourist or native that there are two places you must explore; Brooklyn Bridge and Grand Central Terminal.
3 people found this helpful

JRReviewed in the United States on August 11, 2021
5.0 out of 5 stars
This is history at its best
Verified purchase
Ken Burns weaves ambition, engineering vision and artistic passion into a most engaging documentary about the effort to construct and complete one of the most iconic structures in NYC.
One person found this helpful

hubert earl spears, jrReviewed in the United States on April 13, 2021
5.0 out of 5 stars
Sacrificial effort by the designers and laborers to help define a great city.
Verified purchase
This is any early Ken Burns documentary and not nearly as long as later multi episode documentaries but just as well done and interesting. What a miraculous feat was the building of this bridge that was the most advanced engineering and architectural accomplishment of its time.
One person found this helpful

Amazon CustomerReviewed in the United States on March 24, 2021
5.0 out of 5 stars
interesting
Verified purchase
good documentary

Two parts
The first part os concentrating on the building of the bridge. I was interested in the caisson disease (compression sickness) (pain in the joints, a bent forward posture, blindness, and sometimes death) and of course from retro sight wondered why they did not think of decompression chambers?
We get political interference and a substandard steel debacle.
We also set to see what is happening way out west at the time of the building of the bridge.

The second part is the impact the bridge has on people. It may seem like a distraction at first However this is the real reason for the documentary and has some great information including pictures of the bridge from many popular artists.
There are lots of film clips and great background music. The music is one of the characters in the presentation.
“It happened in Brooklyn” with Frank Sinatra and many other famous people. “Tarzan’s New York Adventure”
You will need to wats it over again as it comes to you pretty fast.
The DVD has special features:
Ken Burns: making history
A conversation with Ken Burns
You will want to see more of Ken Burns’ earlier works.

Kindle CustomerReviewed in the United States on August 22, 2020
5.0 out of 5 stars
Fascinating and well presented
If you are in tune with the way Ken Burns rolls out history, you'll like this one. My husband is retired from a construction company that built bridges, so we were fascinated with the accomplishment of this project using 19th century methods and tools.
2 people found this helpful

Amazon CustomerReviewed in the United States on February 8, 2021
1.0 out of 5 stars
Didn't care for it
It was like reading a really silly romance novel.
See all reviews
Back to top
Get to Know Us
Make Money with Us
Amazon Payment Products
Let Us Help You
EnglishChoose a language for shopping. United StatesChoose a country/region for shopping.
© 1996-2021, Amazon.com, Inc. or its affiliates