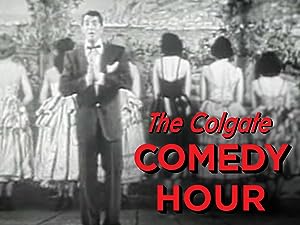 Season 1
(10)
20177+
This was a Colgate sponsored Comedy hour that featured many notable Comedians and Entertainers of the era as Guest Stars.

Included with Best TV Ever on Amazon for $0.99/month after trial

Watch with Best TV Ever
Start your 7-day free trial
Add to
Watchlist
By ordering or viewing, you agree to our Terms. Sold by Amazon.com Services LLC.
Write review

Paul BuffanoReviewed in the United States on April 29, 2020
5.0 out of 5 stars
The king of the Tuk Tuk sound
Remember when Jazz legend Marcus "The Worm" Hicks co-starred with Tiny Boop Squigg Shorterly? Those freak lips.... he hit the high Cs all night long. Now, he was no Roy Donk, but he did play the alto sax with a kink in it when he ran with Mookie Kramer and the Eight Balls.

The only episode I enjoyed more was when Paul Julian (the guy who did the voice of the Roadrunner) performed a few sketches with Jack Marshall (who wrote the Munsters theme song). The rest of the TV in the early 50s was pretty meat-and-potatoes.

The fact that you can buy the DVD set for like 12 bones makes me so excited that I want to pull my hair up (not out).

ZachReviewed in the United States on May 2, 2020
5.0 out of 5 stars
THIS SHOW IS IN RIGHT IN MY Q ZONE!
My favorite guests are

Other guests were just meat and potatoes.

I remember watching this with my girls friends and telling her she wouldn’t be a good writer because she doesn’t have a curious mind. It was the episode with Paul Bufano. We ended up listening to his album Cafeteria Jangle. It was the same night she gave me a fit bit and I said it was gonna give me wrist cancer. She said “it’s the cigars you smoke that are gonna give you cancer. It’s the T-Bone steaks you eat that are gonna give you cancer.”

My buddy Rays parents were out of town and we used their basement to finish the series.
68 people found this helpful

Lenore C. JacobsReviewed in the United States on July 20, 2013
3.0 out of 5 stars
7 was not a lucky number in this case...
Verified purchase
I purchased this seven episode set to compliment some other Colgate Comedy Hour episodes I have which feature other hosts (Abbott and Costello, Gordon MacRae). Although I thought the concepts behind the comedy skits were brilliant, the silliness often went too far (bordering on extreme slap stick), almost to the point of stupidity, because of the antics of Jerry Lewis. Lewis, although quite a clown and, in some cases, an excellent actor, was too mantic most of the time. Dean Martin was the casual friend who tried to balance Jerry's wild antics, but it just didn't work. I had hoped that the special guest stars would make each episode more enjoyable, but most did not get much time to perform and all of the special guests, except for a choral group that performed with incredible harmony, were mediocre. Dean Martin, of course, sang a song in each of the seven episodes, but he was not terrific either; he certainly was capable of better singing. Some folks may enjoy this almost slap-stick style comedy, but it didn't really satisfy my tastes. Tape quality was good; all episodes are in black-and-white because they are from the 1950s.
One person found this helpful

classicmoviesReviewed in the United States on February 20, 2009
2.0 out of 5 stars
not a fan of jerry lewis
Verified purchase
I was never a fan of Jerry Lewis and after watching all 7 tapes I know why--don't like his type of humor, he seemed to be in every scene and he upstaged Dean whenever he was on. On one of the shows Lewis hurt Martin by stretching his mouth (Lewis got carried away with himself as he seems to do on all of these shows). The only stars I'd heard of before on the tapes were Rosemary Clooney, Bob Fosse, Polly Bergen and a walk on by Jack Benny. They were not in any of the skits. They performed a couple numbers and disappeared. Couldn't figure out why Jack Benny bothered to show up, he didn't say anything. Maybe back in the day it was a privilege just to get him on a show.

By the end of the 7th tape of more of the same I'd had enough. I don't know why it took Dean Martin so long to leave Jerry Lewis. Thank heavens Sinatra took Martin under his wing. He gave Martin confidence and respect and Martin showed us how talented he really was. On the Martin & Lewis Colgate Comedy Hour I saw a very vulnerable Dean who had more to give if he had been given the chance.

Pros: Filmed before a live audience which gives the comedy hour a sense of electricity; the last 5 minutes of each program where Lewis & Martin are tired. They seem to finally warm up to the audience and each other.
2 people found this helpful

Lynn O'NeilReviewed in the United States on August 25, 2014
5.0 out of 5 stars
Hilarious fun
Verified purchase
I absolutely adore these Colegate Comedy Hours dvds ( hilarious comedy action) unfortunately the contents can be duplicated on other Colegate dvds, As a lover of Lewis and Martin it means I have spares if needed. Fabulous entertainment especially when they fluff their lines or sketches go awry, if a dvd of their bloopers could be made I'm sure sales would rocket GREAT STUFF !!
2 people found this helpful

dolores t. petersenReviewed in the United States on November 23, 1999
5.0 out of 5 stars
I'm still laughing
These videos are well worth the price for all the enjoyment they have brought. Altho it's been years since we have seen these two guys together, they still have that "certain something" when it comes to timing and how to get everyone to crack up. If you are looking for a lot of "nostalgic" silliness and laughter, you have to include these videos in your library.
4 people found this helpful

darrene@techtalk.com.auReviewed in the United States on July 13, 1999
5.0 out of 5 stars
Better than many of their films
Here's a great look at Martin and Lewis unrestrained by movie scripts and endless takes. This is live tv and amazing stuff, even 50 years after it was made. Lewis is manic, scarey, mean, vicious and hilarious. Martin is himself - laid back, funny and with that beautiful voice. The lowlight is seeing Jerry's Dad sing. What a ham and it's a great laugh to hear Martin intro him and say he's on not because he's Jerry's Dad, but b/c he's a talented singer in his own right -- yea...right! Anyway, each show ends with a great short version of what I can only imagine was the insantiy of their stage show. Brilliant, but seven hours is toooo short.
5 people found this helpful
See all reviews
Back to top
Get to Know Us
Make Money with Us
Amazon Payment Products
Let Us Help You
EnglishChoose a language for shopping. United StatesChoose a country/region for shopping.
© 1996-2022, Amazon.com, Inc. or its affiliates